Check Out This New Six-Story Mural In Downtown Memphis

Check Out This New Six-Story Mural In Downtown Memphis

If you've been to downtown Memphis on Main Street lately, you've seen the huge new mural on the MLGW Downtown Community Office building (at Main Street and MLK Jr. Drive).

This six-story-tall artwork is part of the Memphis Heritage Trail project, was commissioned by the Urban Art Commission, and is a collaboration between two artists with Memphis ties: Derrick Dent and Michael Roy, aka Birdcap. I sat down with Michael last week to learn more about the project, which features people and scenes from black history in downtown Memphis.

Michael told me that Derrick developed the concept for the mural and conducted extensive research, focusing specifically on events that have ties to or took place in downtown Memphis. 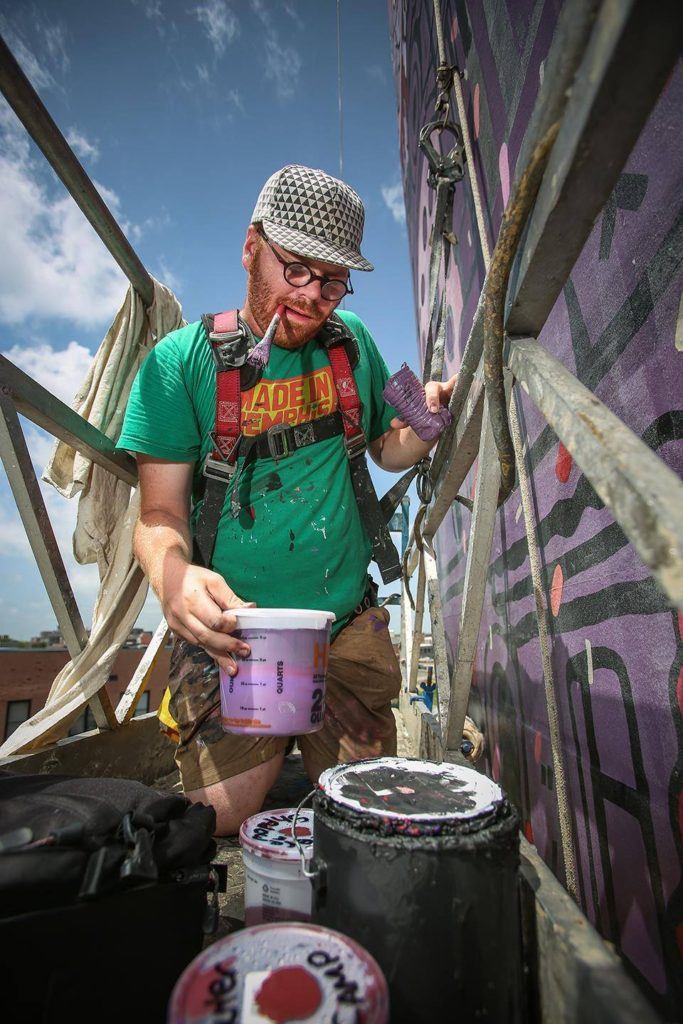 Michael working on the mural. Photo by Jamie Harmon, used with permission.

Derrick created some sketches and collaborated with Michael, who did more sketches, the final design, plus the painting and installation. Michael had lots of help, too, from local artists Eli Gold, Eric Clausen, and others.

Visitors to downtown Memphis can now see the finished product: a stylized collection of vignettes, a mural of impressive height - 70 feet - in the colorful, bold style we've come to recognize from Birdcap. Here's the key for what's in the mural.

(I took this photo before the final scaffolding was removed yesterday.) 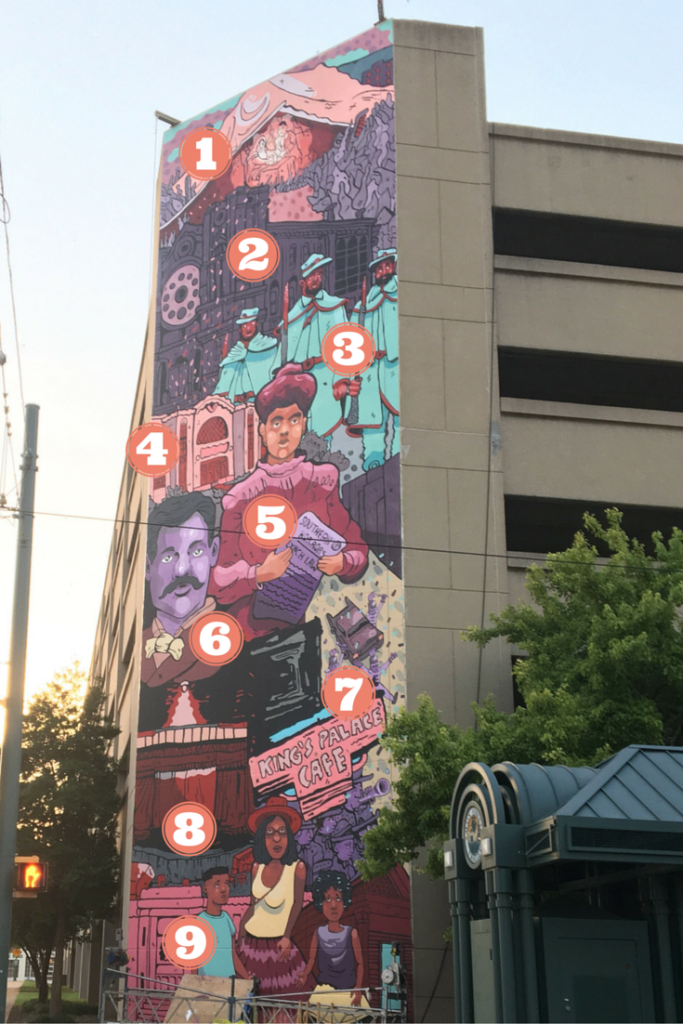 1. President's Island Contraband camps: President's Island was once home to black refugees and recently freed slaves fleeing north Mississippi. At that time, it was actually an island rather than the peninsula it is now. The settlements were known as contraband camps. This imagery also echoes a traditional manger scene, a reference to the Christian faith that is important in many African American communities.

2. Beale Street Baptist Church: the first brick church built for use by African Americans in the U.S., and an important gathering place for newly freed slaves.

3. Soldiers in uniform: by the end of the Civil War, black soldiers made up about 10 percent of the Union Army.

5. Ida B. Wells holding literature about lynchings in Memphis: Wells was an important suffragette, anti-lynching activist, and journalist who lived, taught, and worked in Memphis. Using the basement of Beale Street Baptist Church as her home base, she published a newspaper that revealed the reality of racial violence in Memphis and across the U.S.

6. Robert R. Church: Considered the first black millionaire in the U.S., he was a businessman and philanthropist that built a park and auditorium (see #4 and #8) for African Americans.

7. Cotton Makers Jubilee Parade on Beale Street: This event, which had its heyday in the 1940s-50s, was an important community gathering for black Memphians. Kings Palace Cafe was a downtown venue open during that time. See a whole collection of photos from Memphis photographer Ernest Withers here.

9. Contemporary family/Mulberry Street houses: this is a composite image of modern-day Memphians ("loosely based on personal sketches and photos of downtown residents"). The houses in the background are buildings on Mulberry Street, which was a street home to numerous thriving black businesses until the end of the 60s.

Ed. Note: The above information was provided by the artists, then I added additional information based on my own research. I'm no history expert and this list isn't meant to be comprehensive, but just a starting point to understanding the subject matter of the mural. There are links in there if you want to see some sources. 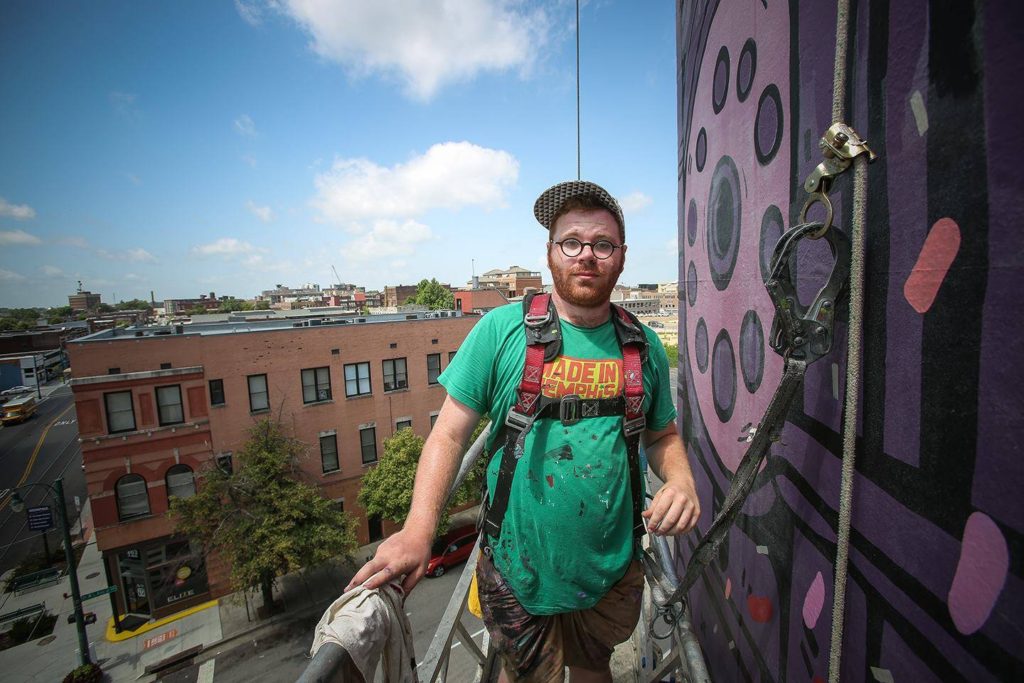 Michael working on the mural.
Photo by Jamie Harmon, used with permission.

The behind-the-scenes on the making of this mural intrigued me as much as the visual impact of the piece. From what I understand, there was a bidding process for the job, a process that the Urban Art Commission facilitated. Shout-out to them, as they've facilitated the I Love Memphis murals as well.

According to Michael, other submissions may have been simpler or smaller, but he and Derrick saw it as a chance to give something big to downtown Memphis.

I got the feeling that it might have been easier for him to create something less ambitious, but he isn't one to shy away from a challenge. "It became a passion project," he explained. He also admitted that he "selfishly wanted to see if [he] could actually do it."

The mural is mostly painted on panels of Polytab - a synthetic, lightweight, industrial-strength canvas. This allowed Michael to paint the majority of it on the ground. This way, he only had to rent scaffolding for the time required to install the panels. It's apparently very pricey to rent scaffolding, so that was mostly a creative budgetary decision.

Five In One Social Club donated the use of their new warehouse space on Summer for the pre-installation painting. As it says in the embedded caption, the awesome Andrew J Breig took this photo.

After weeks of painting in a sweltering warehouse, it was time to install the panels on the building. Aforementioned Eli and Eric helped with the installation, and then Michael painted the eye-level bottom portion by hand directly onto the wall.

I asked if because the art was essentially glued onto the wall, if it was meant to be temporary. "It's all industrial strength materials, glue, and sealant, so it will actually probably last longer than most of my other work around town, " Michael answered.

Michael is clear on the importance of the role of Derrick Dent in the development of the project. "The narrative came from a black Memphian," he explains. "He developed the content, he did a ton of research on the concepts, and he approved all of the decisions I made."

He also explained to me that this has been the hardest project he's personally ever done - both emotionally and physically.

Been bad about posting anything lately, but reason is @dentslashink and me are working on a 70 ft wheat paste for downtown Memphis. This 20 foot block is the top 1/3rd of it. Appreciate everyone who's come through and helped out so far. Warehouse gets hot but y'all all yeti troopers // #birdcap #polytab #art #mural #studioshot #derrickdent #painting #wheatpaste #illustration

I say it was well worth it. I think if you head down to see this stunning new mural - one that honors artistic collaboration as well as the importance of black history in downtown Memphis - you'll agree.

Learn more about Derrick Dent and his work here.

Learn more about Michael Roy and his work here. Also, definitely check out his Rappers With Pokemon Tumblr,

If you want to learn more about black history in Memphis, I highly recommend the Tour of Possibilities with Carolyn Michael-Banks. She was a guest on the I Love Memphis podcast and you can hear her interview here. 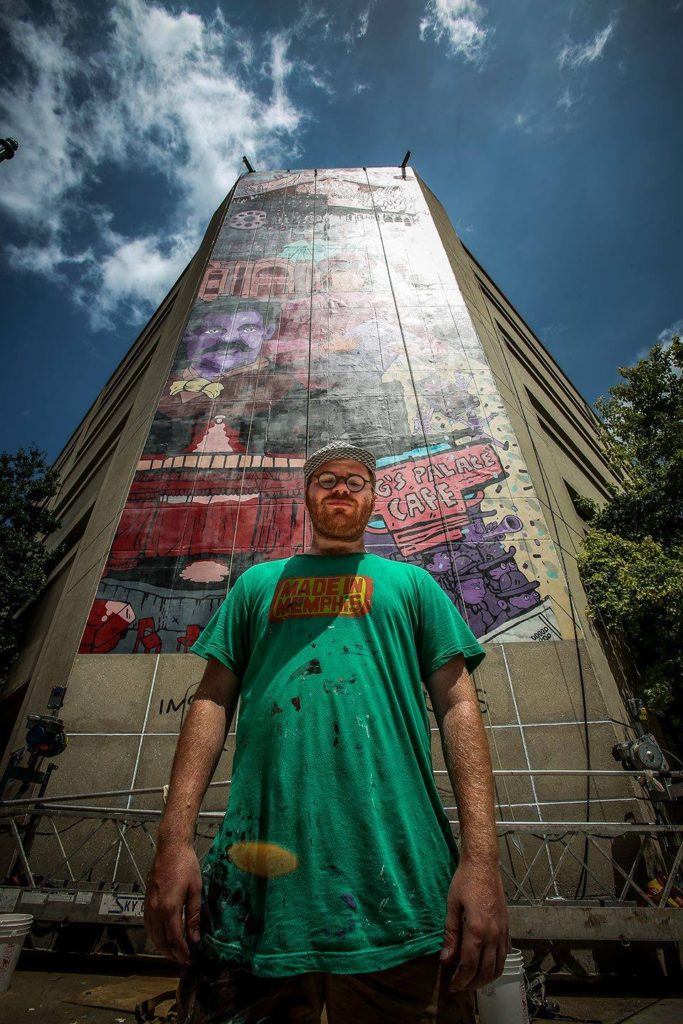 Not frequently downtown but I happened to be there on Monday and saw this mural. Picked up on some of the references but not all. Your post was a great help in understanding more about the mural and Memphis history. I am looking forward to following the links and learning more about the people and events depicted here. Kudos to the Urban Art Commission and to Derrick Dent and Michael Roy!

Sad to hear that this one is going away. I love it, and don't understand why it is being taken down...really a bummer.

It's terrible. I don't understand it at all.