Bryant Bain;s Bain BBQ food truck serves both Memphis-style and Texas-style barbecue on the same menu. The audacity! This six-year Memphis resident is a native of “a very, very small Texas town of about 700 people” who grew up competing in BBQ contests with his family, and honed his skills in the years since through experimentation and research.

I talked with Bryant recently to learn everything I could about his new Memphis food truck. I had to nerd out a little about the smoker trailer. Then, I tried the food. One word: amazing. 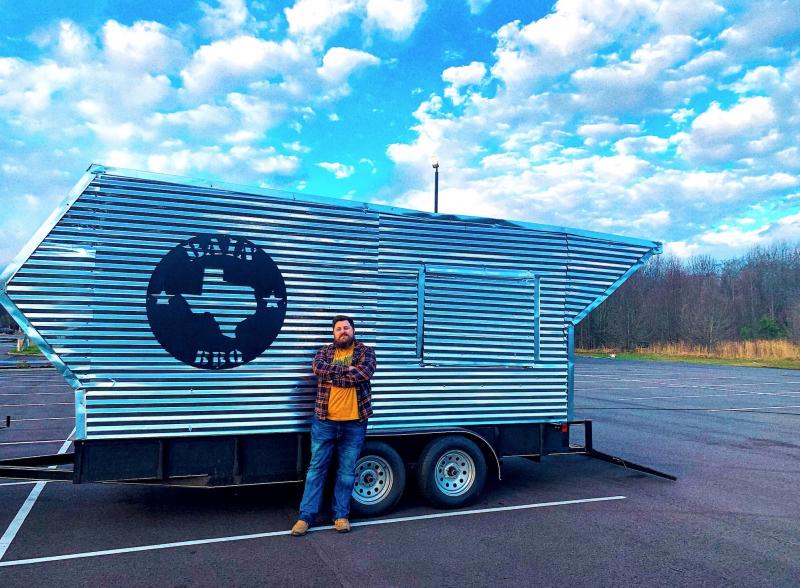 Bain BBQ, run by Bryant and his wife Heather, serves smoked meats by the half-pound, sandwiches, sides, and desserts. The menu is more à la carte, less "meat-and-two" plate situation. His brisket is top of the line Wagyu beef. He says he’ll likely take a loss to start on this premium brisket, but for now cares more “about letting people try it, and figuring out where I want to go with it.”

You will need to check out the Facebook or the Instagram page to find out the weekly location and hours.

Another big menu item (literally) is the Texas Beef Ribs. According to Bain, all the beef ribs available on Memphis menus are actually beef back ribs, which are smaller with less meat. “There’s nothing wrong with them, and they’re tasty,” he says. “But if you look at what a Texas beef rib really is, it’s like something from the Flinstones.” Those ribs are only available occasionally, maybe once a month. He warns me that they’ve very Instagrammable.

He also serves a sausage imported from his hometown smokehouse, Prasek’s. “It’s my favorite sausage in the world,” he says. “I’ve never been able to find a sausage that tastes like it.” Bain BBQ food truck offers a regular sausage and a jalapeño sausage from Prasek’s, both made from a mixture of beef and pork.

The sides are a little different, too. Instead of sweet barbecue beans, Bain BBQ serves Texas pinto beans, which Bryant describes as “kind of like a chili bean, spicier, warmer—they go well with the meat, which is really rich.” There is macaroni and cheese, he confirms. My mouth is watering already. Bain BBQ serves banana pudding and chocolate chip cookies for dessert, too.

As for the location, they've been setting up on Broad Avenue on Sundays, and recently opened on Fridays and Saturdays. The truck opens at 11 a.m., and usually there's a line of folks with lawn chairs waiting an hour (or more) before opening. They sell out every time, so you'll definitely need to plan ahead if you have your heart set on some Bain BBQ.

You will need to check out the Facebook or the Instagram page to find out the location.

“I always wanted to be a chef of some kind, and then I found BBQ. Something about sitting around a fire all night, it speaks to me; I like the flavor profiles,” Bryant explains. “We have ribs in Texas, but I didn’t know pulled pork was a thing until I left Texas, and that was a big realization.” He liked the Memphis dry rub technique with red spices like cayenne, paprika, and a hint of sweetness better than Texas’s salt-and-pepper seasoning. Now he cooks it all.

Bryant didn’t have a formal pitmaster mentor, but he does look up to BBQ expert Malcom Reed. “I have followed Malcom Reed for forever, since he first put a video up,” he explains. (I looked it up and that was about ten years ago.) Malcom is based in Hernando, Mississippi, and has 1.2 million YouTube subscribers today.

Bryant has been practicing his recipes on friends ever since. He’s eager to have unbiased, notoriously picky Memphians judge his work.

smoking meats on a food truck

I’m really interested in the food-trailer-smoker-on-wheels, which was built piece by piece by Bryant himself. He said the code people had never seen his type of design for a food truck before. “I bought a flat trailer and built everything on top of it,” he says.

“My smoker is inside and outside—the fire box portion of it is outside while the actual cooking chamber is inside the truck.” He explained that competition rigs in Memphis have offset cookers, no other food truck uses one.

While Bryant is opening Bain BBQ food truck, he’s had to put his plans to build a food truck park on hold for a bit. He’s working with local firm Archimania to design the park, which might (emphasis on might) be in the Crosstown neighborhood in the former Saigon Le space.

“I know the lady who owns the land,” Bryant laughs. “I smoked her a turkey over Thanksgiving.” The original plan was to have Bain BBQ open there, but the space needs a lot of work first.

He says he can’t say much more, so I want to reiterate that all of that is up in the air. People will surely have feelings about something new going in the space where beloved Vietnamese restaurant Saigon Le burned down in 2016, but I'm optimistic.

You will need to check out the Facebook or the Instagram page to find out the location.