Ed. Note: Michael is back with another edition of his food truck series. This time, it's local favorite, Gourmade, which whips up tasty sandwiches, burgers, and mac 'n' cheese. Have a little-known or favorite food truck he should explore? Email me at [email protected] or Tweet to him at @_one901. Then click here to read his other food articles.  In the past, he's tried Quasi Halal Asian Street Food, Chomp, Soi Number 9, that one Mexican BBQ shack, plus the Wing Guru (not a food truck). What. Will. He. Eat. Neeeexxt??

Hey y'all! It’s Mike, and I'm back with another food truck review. Recently, I made a trip to Wiseacre Brewery on Broad Ave to catch up with Jared Richmond's Gourmade food truck. I'm just gonna tell you right now: this was more than just a food experience, I learned some new words as well.  Ever heard of the word "epicurean"? Me neither. It refers to a person who is dedicated to sensual enjoyment, in this case, the enjoyment of food and drink. The more you know! That definition is definitely fitting for Gourmade. 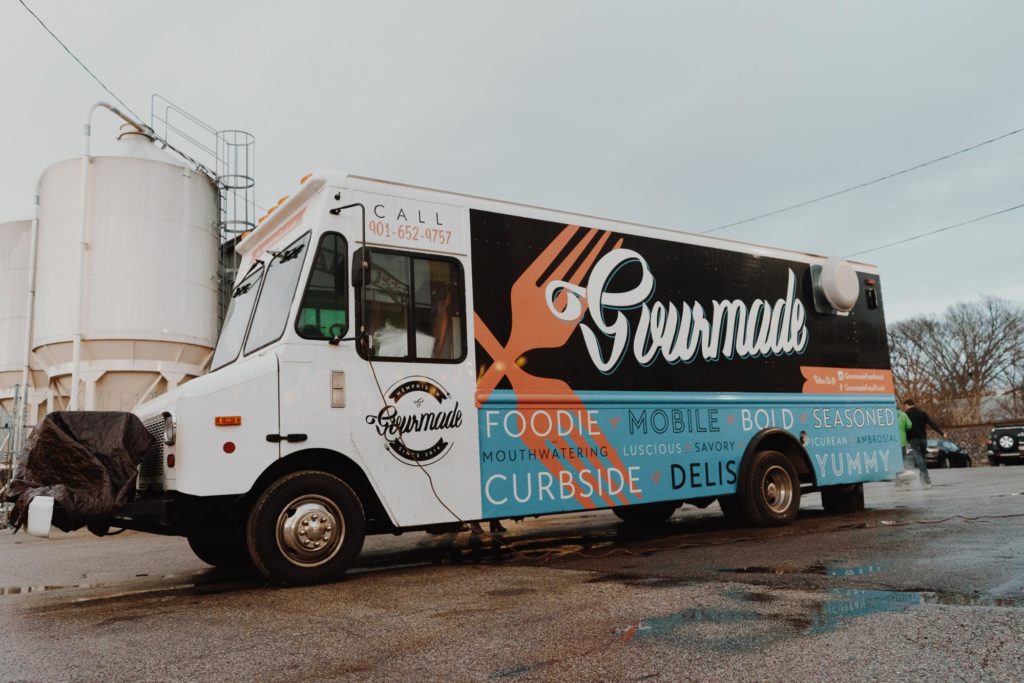 The truck entered service on June 21, 2016, though Jared has been catering since 2014. You can find the food truck Thursday through Sunday at local breweries like Wiseacre, Memphis Made, and High Cotton. Trust me, the food pairs very well with beer. 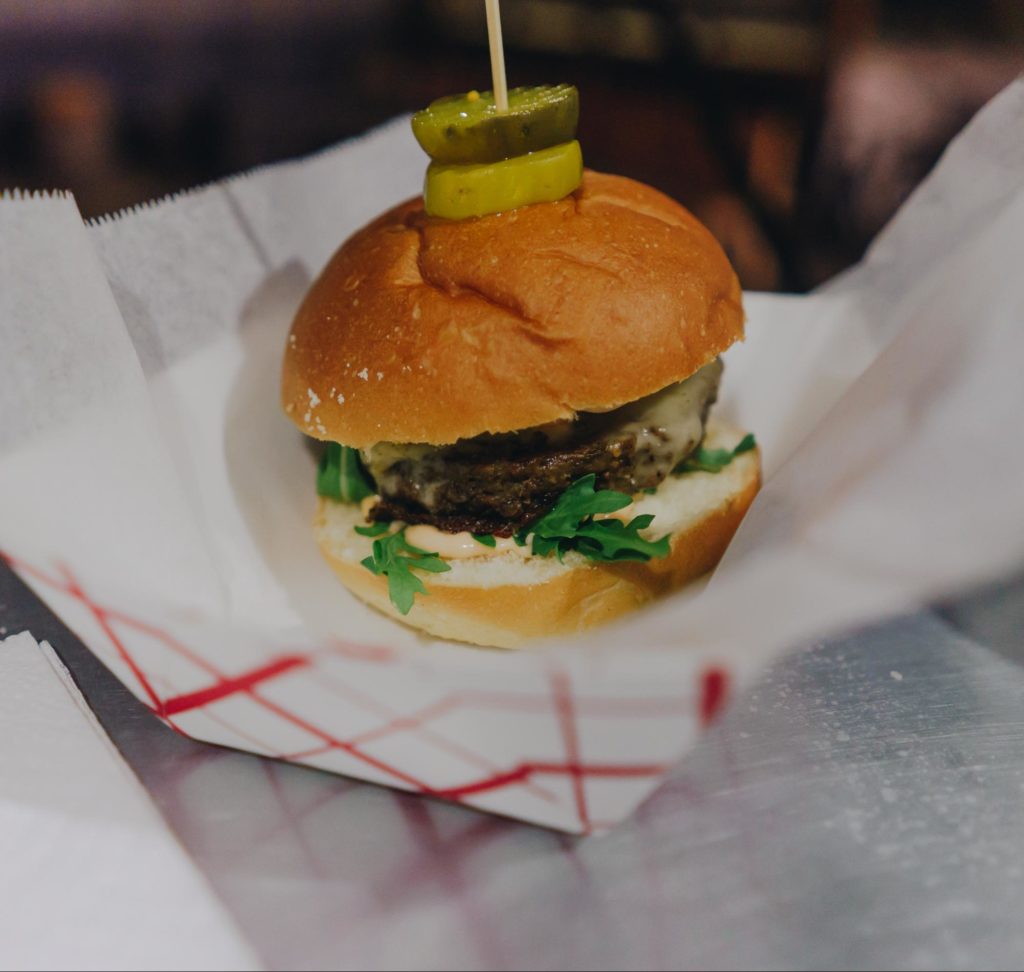 All products are sourced as locally as possible. A secret local baker supplies the brioche, while Jared does all the rest of the baking himself. So you’re getting the whole chef experience from top to bottom. All this, and the prices aren’t outrageous.  I couldn’t decide what I wanted, so I got a little bit of everything. I went with the salmon BLT, Spicy burger, Gourmade burger, and the mac and cheese. I washed it all down with the epicurean delight that is Wiseacre Gotta Get Up to Get Down beer. See, I told you this was more than just a food experience. 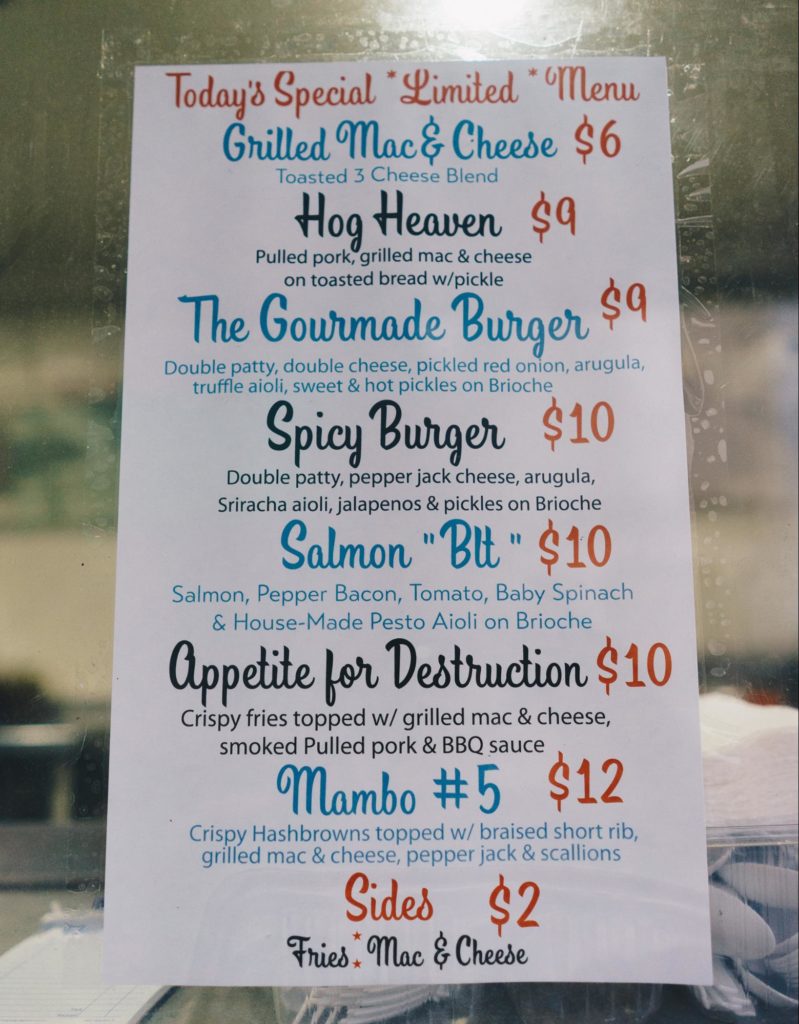 I have to start this off by saying the Salmon BLT is probably the best sandwich I’ve ever had. Yes, I’m going on record saying this. I’ve had sandwiches and burgers all over Memphis and beyond, but this sandwich was amazing. This is real salmon, folks, and it's grilled and seasoned to perfection then topped with bacon, spinach and tomato with house made aioli pesto. It's a fancy burger that doesn’t slack on the portion. I literally ran out of room on the brioche bun. 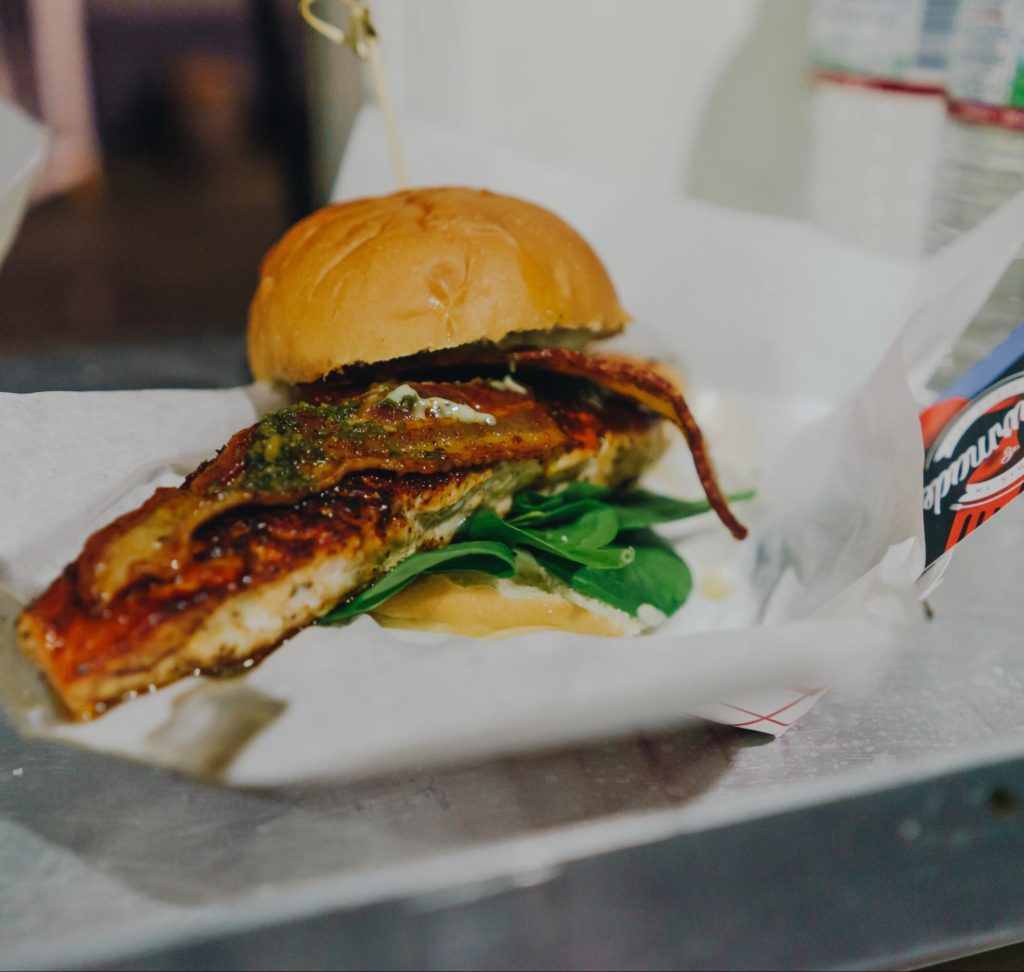 After the first bite, I instantly knew I wouldn’t want anything else. It’s really that good. That’s not to say that the other burgers weren’t good. They also were very good. The spicy burger had some kick, but was not overly spicy. You won’t need a gallon of water to eat it. The Gourmade burger was also winner. Using arugula rather than lettuce is a nice touch. 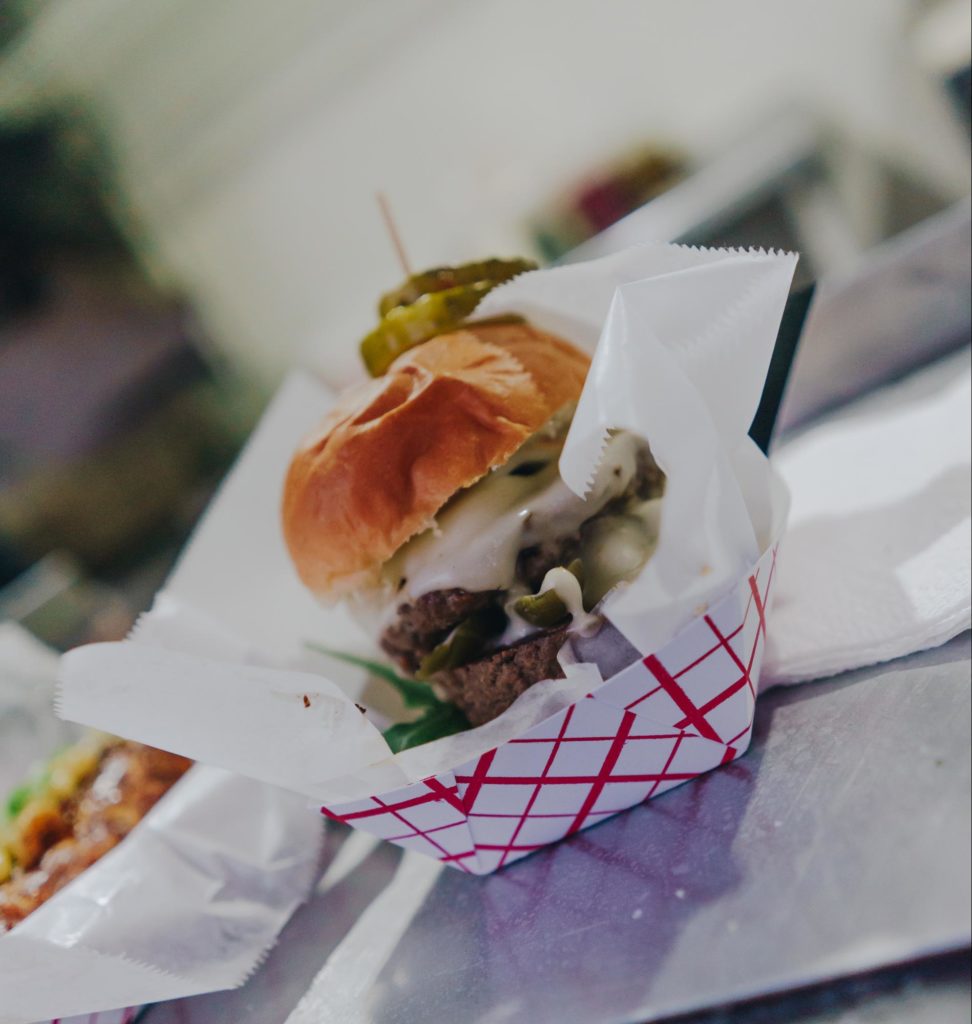 The Mac and cheese is also some of the better mac and cheese I’ve had. It almost has the taste of a scalloped potatoes and the grilled crust takes it to another level. Definitely a must-try. I can personally recommend Gourmade food truck to anyone. I enjoyed not only the food, but the ambrosial customer service as well. (Yes, I learned ambrosial from Gourmade as well. Google it! ) 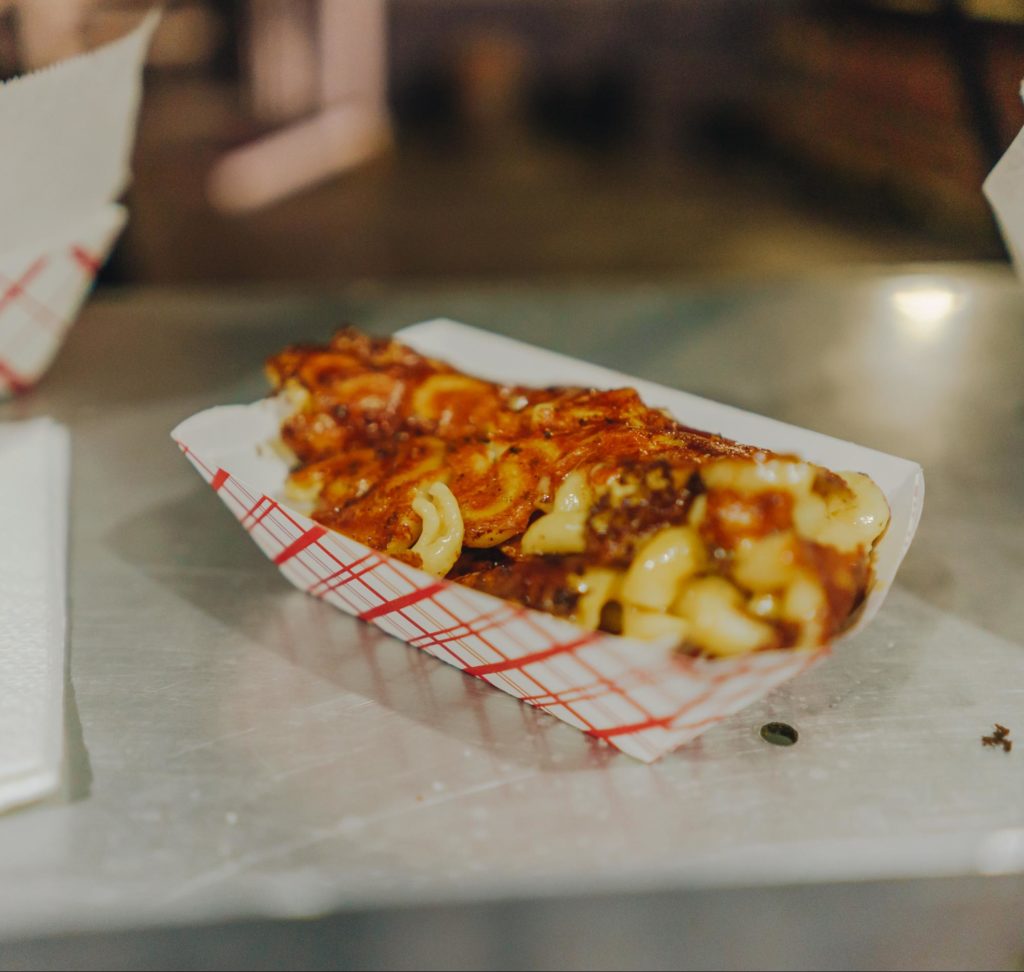 Get that Salmon BLT and mac and cheese! Pro tip: I hear Jared makes an amazing homemade Key Lime Pie. I’m not saying it’s the best, but it’s worth trying. It’s not on the menu, but it’s on the menu. Wink wink. You can follow Gourmade on Instagram at @gourmadefoodtruck for their schedule and updates. A word of caution: the pictures will definitely make you hungry. You’ve been warned. Do you have a food truck you’ve seen lately that you want me to try out? Have you had Gourmade before? Drop a comment and let me know. 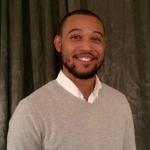 Michael Butler, Jr. is a native Memphian, blogger, photographer, and United States Navy veteran. He loves the food, people, and scenery of Memphis and wants to showcase all the city’s great things. Michael loves to spend free time with his daughter, hanging with friends on local patios, or playing a game of cornhole. He’s an urban explorer who believes that life is for living. Follow him on Facebook, Instagram, Twitter, or his blog.

You have to try Mr. Frazier's Fish Fry. He is usually at the Food Truck Park on Lamar/Old Getwell Rd on Friday's but has a FB page where he posts his locations. This young man has been cooking for years, but was trained at L'Ecole a few years ago.. He specializes in catfish and it is the best I've had. along with the fried okra. He recently did a Voodoo Catfish that set my soul on fire! It was fried catfish topped w/ a sauce consisting of crawfish, shrimp and Andouille sausage served over rice.....Amazing!!

Shelly - That sounds delicious! thanks for the hot tip.

I first taste Gourmade Food a my best friend wedding. Every since I tried to promote their business by getting them to our employee luncheon. After three tries and actually speaking with someone I have given up. They did not show up to our first luncheon. I tried to give them a second and third try and was unsuccessful. I think it is complete asinine and morally reprehensible that one has a business and does not return phone calls, emails, or text. Smh DO NOT book them for any function. They will not show up and you will be left embarrassed.

What a wonderful info...

Wow I loved this review ! I will be trying gourmade really soon