What to do for New Year's Eve in Memphis!

Here's a list of events for New Year's Eve in Memphis to ring in the new year.

Got one to add? Submit it here. 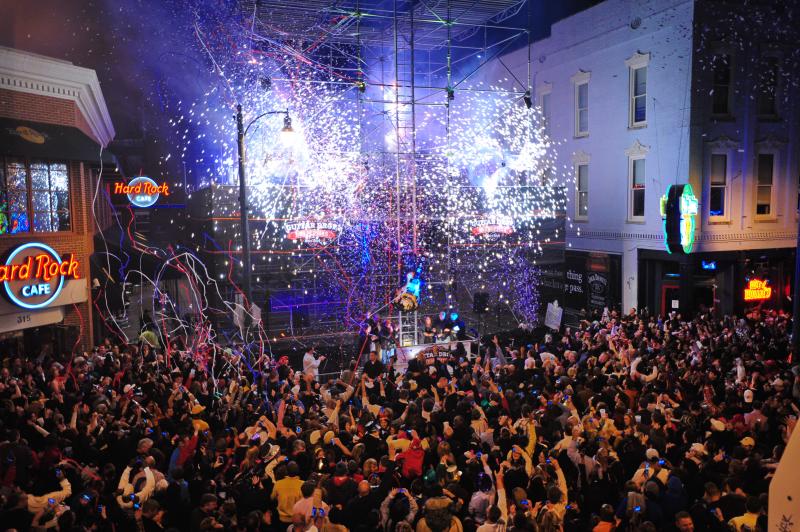 From bar crawls to karaoke to late-night dance parties and, of course, tons of live music, Beale Street in Memphis is lively year-round, but especially on New Year's Eve. There isn't another New Year's Eve experience quite like it, as tens of thousands of people gather in the iconic street's bars and restaurants to rock in the New Year. Countdown to 2023 with confetti cannons, fireworks, live DJs, and more on Beale!

This year, they'll have a big mirrored disco ball rising up a 50-foot tower that will reach the top at midnight. As far as entering Beale Street itself, it's 21 and up starting at 9:30 p.m. Before that it's all ages to enter the street.

Individual clubs will still have cover charges and most will be 21 and up. You can also get a Beale Street Fast Pass for $100 which includes several clubs’ cover charges and allows you to skip lines. Purchase that and get more details here.

Celebrate the New Year with the Children's Museum of Memphis' favorite superheroes – you! Enjoy the balloon drop at noon, face painting, photo ops, free carousel rides, and more. Tickets are $3 for members and $20 for non-members, includes admission price.

Railgarten hosts a special kid-friendly New Year’s Eve celebration on the afternoon of December 31st from noon to 3 p.m. There’s a balloon drop at 2 p.m., face painting, a buffet ($20 per person) and more fun.

Ring in 2023 at Lafayette’s Music Room

Lafayette's in Overton Square will host a New Year's Eve party in midtown Memphis. The event will feature Vegas-style seating with passed appetizers, party favors and a champagne toast at midnight. Formerly Known As will take the stage at 6 p.m., with Twin Soul to follow at 10 p.m.   Tickets start at $100 for individuals, and $175 for two.

Celebrate 10 years of music with the PC Band at Minglewood Hall. All tickets will provide dinner from 7 p.m. to 9 p.m. General admission tickets start at $102.

Bring in the New Year at Hernando's Hide-A-Way in Memphis with Jason D. Williams and special guest TBA! Tickets range from $50 to $450.

New Year’s Eve at the Peabody

Gather your friends and a glass of champagne, and ring in the New Year at the "South's Grand Hotel" with the iconic Peabody New Year's Eve Party in downtown Memphis. General admission tickets are $65/person before Dec. 30 and $75/person at the door. VIP tickets are $250/person. There will be live music by Seeing Red, Southbound, and DJ Epic will be there keeping the show going all night.

Live performances by Gerald Richardson, Jonte' Mayon, and Shunta Mosby in the Hilton Grand Ballroom with DJ Zoom on the 1s and 2s! Enjoy hors d'oeuvres, balloon drop & a champagne toast at midnight for New Year's in Memphis. Tickets range from $55 to $500.

Bring the New Year in at the Westin Hotel starting with live jazz then at 9 p.m. the DJ will take you over into 2023! Free event — first come, first served, so get there early!

Louder Than Bombs returns to B-Side inside Minglewood Hall in midtown Memphis for a New Year's Eve performance of The Smiths and Morrissey.

Meddlesome Brewing Company in Cordova celebrates 2023 with a Great Gatsby costume party. Prizes and discounts for those who dress up. The barrel drop will be at midnight.

Eat, drink, and ROCK at RockHouse Live Collierville to ring in 2023 with a live performance by Hairspray Nation. Reserved seats include dinner. All $20 tickets receive a champagne toast and party favors.

Come ring in the New Year with an audio-visual experience presented by Growlers, New Dream Promotions, and MADD Events LLC. Tickets are $15 adv. / $20 at the door.

Nerd Alert arcade is ringing in the New Year specially for the kids. There will be a ball drop at 4 p.m.,glowsticks, balloons, and Nerd Alert’s wacky soda and cereals for purchase. Tickets are $10.

Ring in 2023 with an all night dance party at Black Lodge’s New Year’s EVIL Rave! Enjoy DJ sets, special lighting and visuals, hoop performers, fire dancers, a full bar, and much more. Tickets are $20 per person. 18 and up.

Cheer on the Grizzlies at the FedExForum on Dec. 31 before you head to Beale Street to ring in the New Year. Prices vary.

A New Year's Eve experience at Esplanade Memphis filled with performances, DJ & dancing, photo booth, balloon drop, and champagne toast at midnight! Kids 12 & under will be hosted in the kids area with a pizza party and can join the family close to the New Year. Ticket range is $40 - $100.

The Hi-Tone hosts a New Years event with Emotions False Records and 9 other bands. $20 cover.

Cameo bar in midtown Memphis hosts a New Year's Eve party named after their famous dangerous mystery cocktail, The Rage Quit. Rage Quits and sparkling wine will be $6 all night! 21 and up.

The Hyatt Centric's rooftop bar, Beck & Call, will host a New Year's Eve party with amazing river and downtown views—right at the end of Beale Street. The dress code is your "New Year's best", they'll have light bites, cocktails, DJ CodeRed, and a midnight champagne toast. Get your tickets ($65) here.