"There's no Rumple, no Jäger, no Fireball. If you want that, you can go a few streets over."

This is what Chris Ferri, co-owner of Belle Tavern in downtown Memphis, told us after a few sips of Ohisi Tokubetsu Reserve Whisky last week. He'd generously poured a tasting for my friend Meghan and I, in honor of the establishment's third birthday in September 2019. The Japanese whisky is one of Chris' many rare finds. 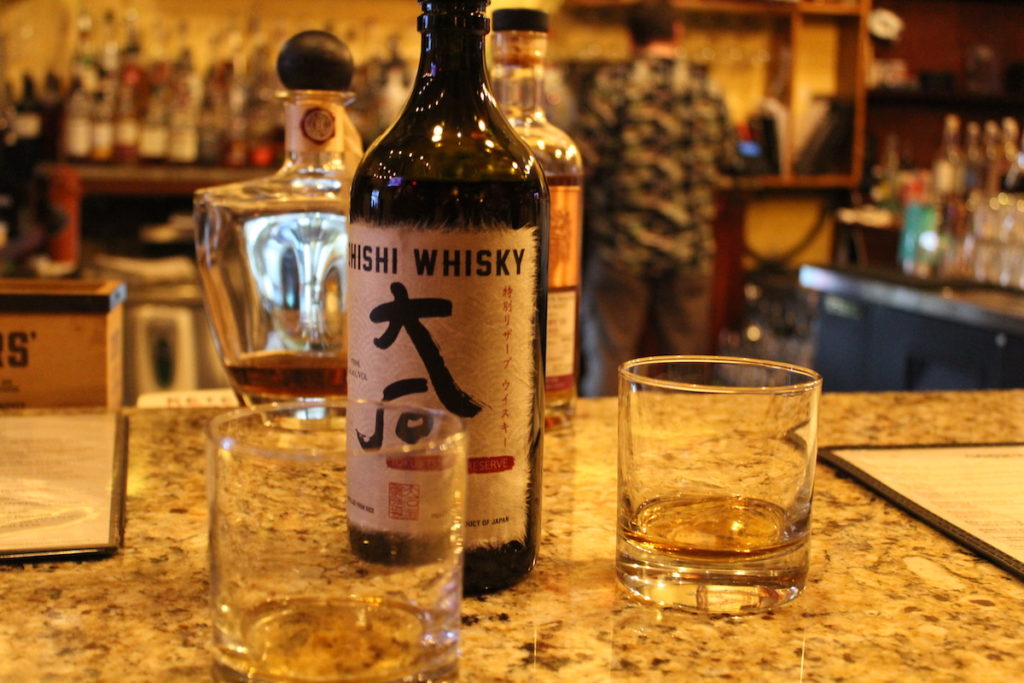 Over the past few years, he's curated a collection of nearly 300 bottles of rare whisk(e)ys, single malt scotches, and other delicacies without sacrificing a relaxed, welcoming atmosphere.

Chris' passion for an understated tavern that serves a leather-bound book's worth of handsome brown liquors is evident across the board at Belle Tavern. Treat yourself and learn something about rare spirits in the process, like we did. 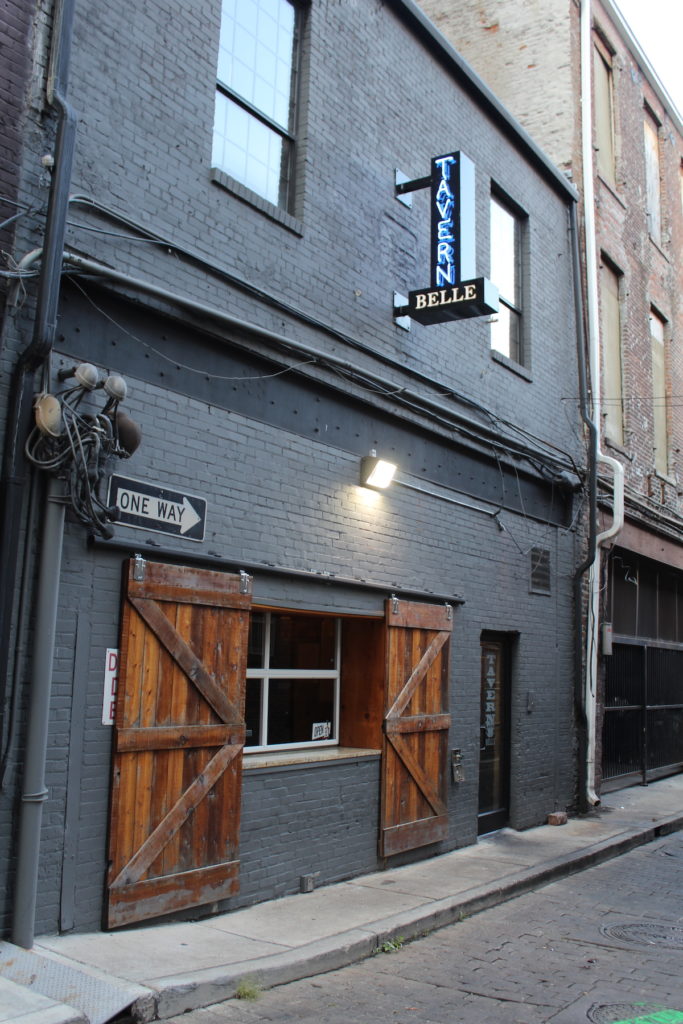 When Meghan and I walked down Barbaro Alley at 4:58 p.m. that day, the barback was hosing off the sidewalk outside. The water hissed and vanished in a puff of angry steam, because we live in a boiling hellscape. Patrons had already filled the bar, which gets going at 4 p.m. Tuesday through Saturday, and Sundays at noon.

During our tasting, Chris regaled us with stories of how he managed to get his hands on this bottle or that bottle, which collections he snagged in the nick of time before some rich Asian businessman bought out the remaining world supply, other tales of daring liquor purchasing. Creating the inventory is a years-long process, and I could have listened to him talk about it all night. 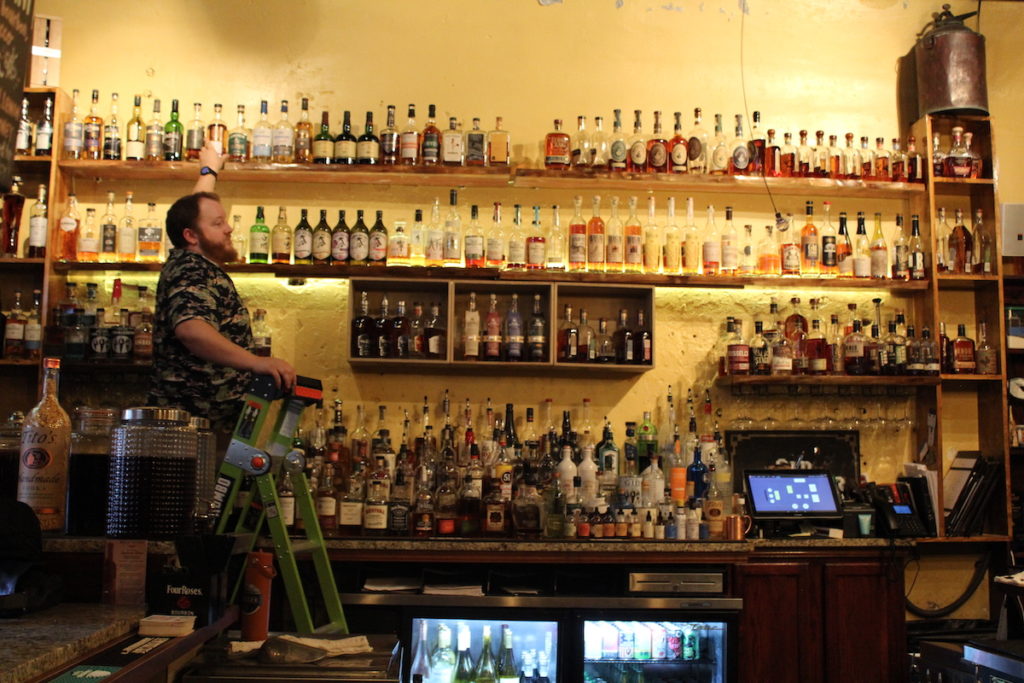 We also got a tutorial on the tasting process per Chris' instructions. First, take in the aromas of the spirits - poured neat, of course - by dipping your finger into the liquor and rubbing it on the base of your thumb and breathing it in.

Then, dip the tip of your finger into the liquor again and run that finger along your tongue from back to front to prepare your palate. (My goodness, am I allowed to write that?) Then take a sip. Add drops of water a few at time if you like - Chris used a dropper - to get a better sense of the flavors.

In addition to the Japanese whisky, we had the honor of tasting a single malt Irish whiskey, and a stunning single grain scotch from 1974, both from Exclusive Malts. The latter knocked my socks off. 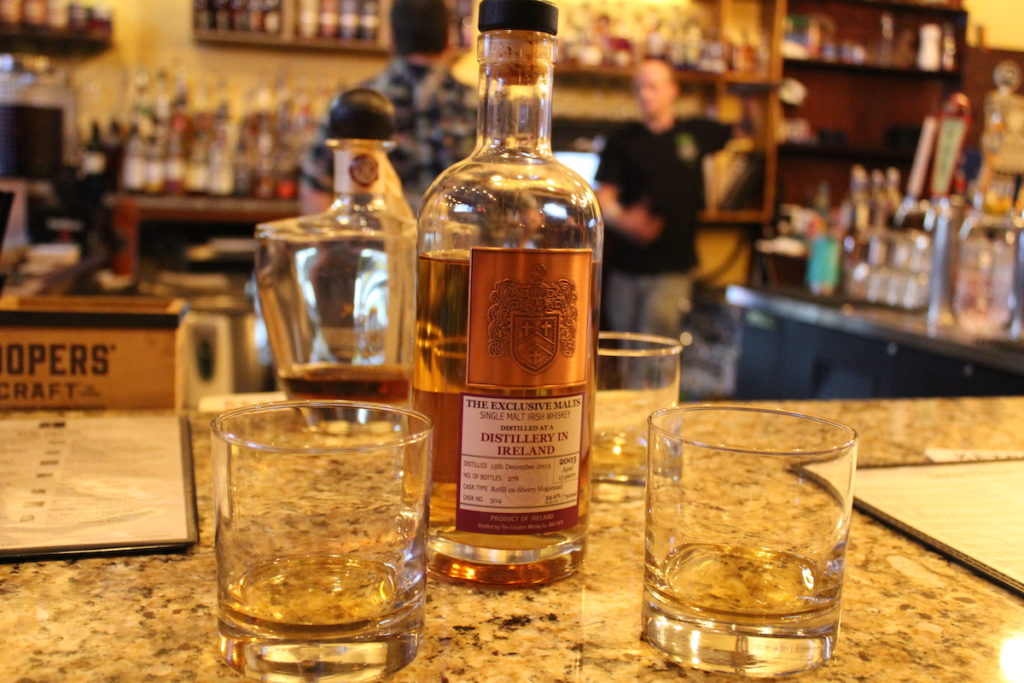 In a world of hard seltzers, frozen pink juice pretending to be rosé, or craft cocktail bars that refuse to serve anything but gin and mezcal, Belle Tavern is precisely what a couple of low-key but discerning gals needed. How else could we make it through the meltiest summer Memphis has seen in years?

The Bar opened three years ago with little fanfare and a plan for word-of-mouth advertising. This is the precise opposite of the approach I recommend for any restaurant or bar opening, usually, but it ended up working out for Belle Tavern. 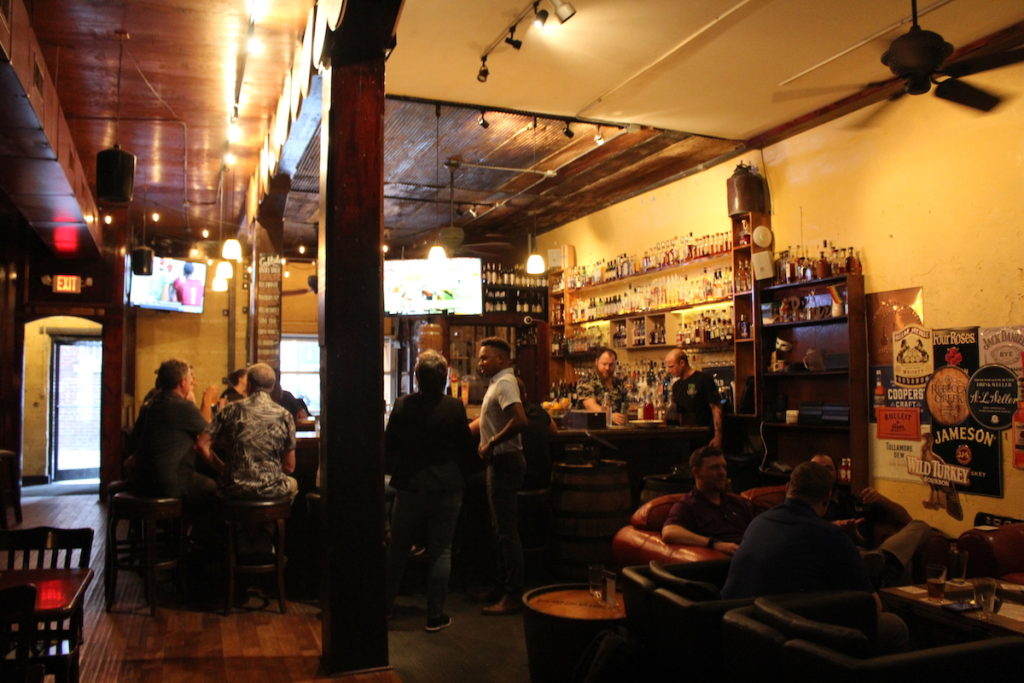 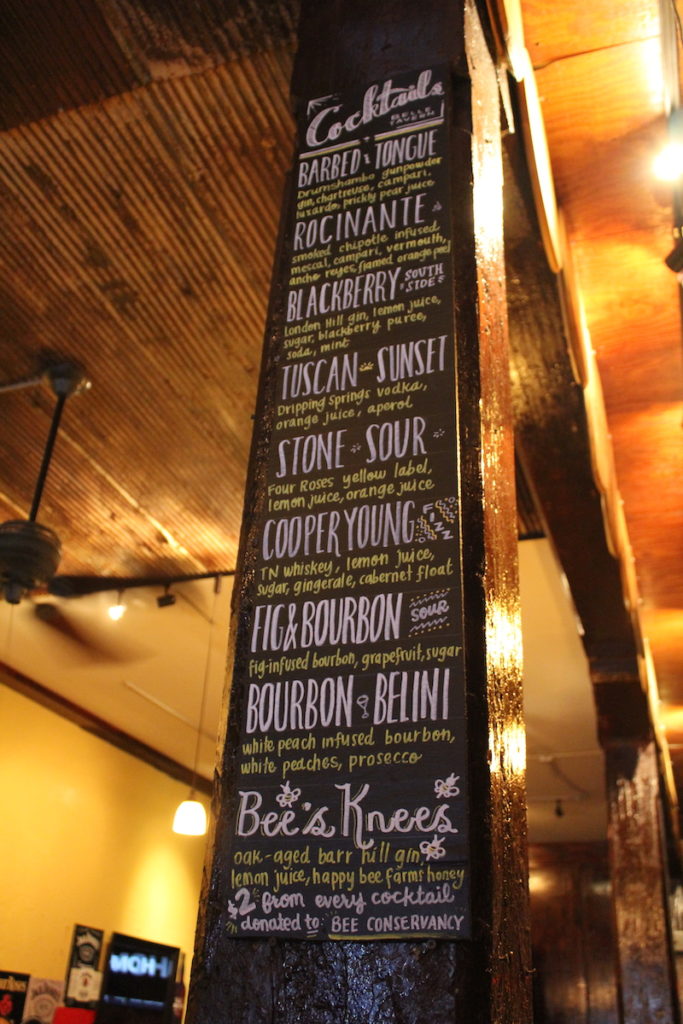 Part of that reason is the built-in clientele from regulars that live in the buildings surrounding the alley. But I think the biggest reason is this: there are a million places to get a beer or have a meal in Memphis, but sometimes you may wish to order something in a rocks glass. I always liked it because the atmosphere is speakeasy adjacent, the bartenders possess skill and friendliness, and the whole deal hits the sweet spot between comfortable and classy.

Even if you're not into the rare whiskeys and all that, you can just as easily sip on a local brew or have a good cocktail (see menu sample above) and a snack.

Belle Tavern welcoming to both regulars, locals, and visitors. Chris says about a quarter of the guests are from out of town, and most found out about the bar from their friends who stopped in during their own visits to Memphis. 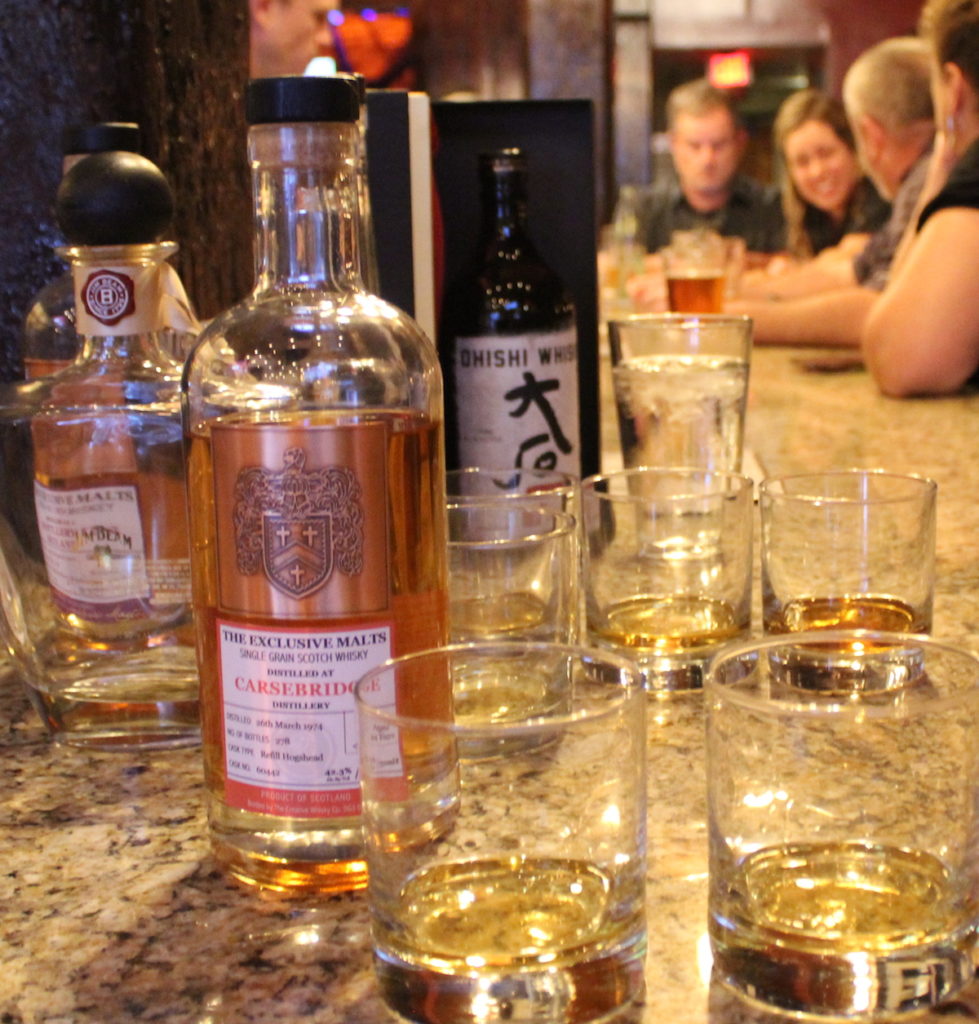 These days, Belle Tavern shares a kitchen with the 117 Prime steakhouse. Their food menu has snacks, skewers, and burgers, including a Prime burger and a black bean burger.

They're open Monday through Saturday from 4 p.m. until 1 a.m., and on Sundays from noon to 10 p.m. and are 21 and up. If you're having trouble finding Belle Tavern, just go down the alley by Aldo's (from Main Street) or by Kooky Canuck (if you're coming from 2nd Street).