Fuel Food Truck is an OG Memphis food truck, one of the first in town to open after the City first allowed the mobile restaurants-on-wheels in May of 2011. In the fall of that year, Fuel food truck hit the streets.

Ever since, Memphians have clamored for their tacos, grilled cheese sandwiches, and vegan options. And as of December 2018, the food truck is even more essential for fans of their cuisine. The Fuel Cafe location on Madison has closed permanently. (The space will remain open as a pop-up restaurant space.) 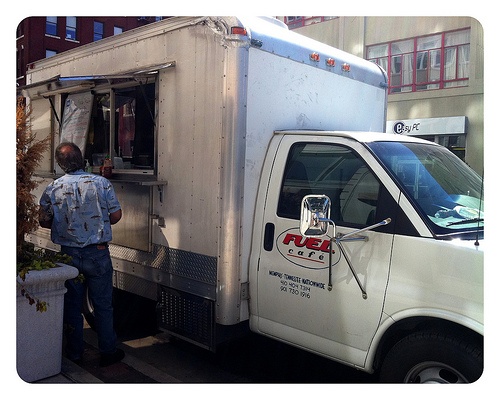 The menu is pretty simple, but it changes frequently. The classic items are the grilled cheese and bison tacos, the former you can customize by adding bacon and/or avocado.

Today, the options were tacos (chicken, beef, vegan and veggie), grilled cheese, a few side items and brownies.

I tried the chicken tacos, which were shredded chicken topped with salsa, cheese, and cilantro. They were just a little bit spicy and plenty filling (way more filing than you'd think they'd be for how cheap they are).

They're really portable, packaged in a paper to-go tub, sort of like you'd get at a ballpark. The guys in the truck will wrap them up for you, or you can be like me and shove them in your mouth while you're walking. 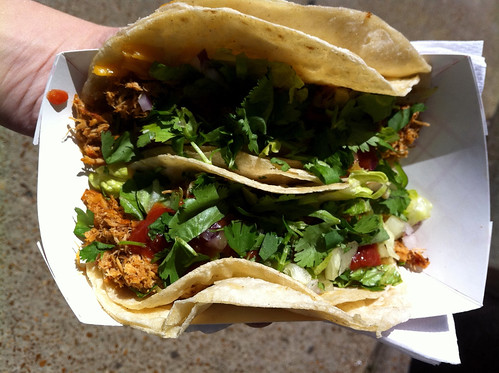 I got the grilled cheese with tomato and arugula yesterday. Delicious! I wish the bread had been a little higher end, but the balance of ingredients to bread made it one tasty sandwich!

To whom it may concern, I am a counselor in an elementary school. We are hosting our annual Career on Wheels for our students at the school on May 4, 2012 from 9am until 11:30. We were wondering if Food Cafe could come and set up your truck outside and share stories with our kids. Our teachers will be more than happy to buy items from your truck. I'm not sure if you could sell on the school property, but the kids would love to see your truck and talk about what you do everyday at work. You can contact me at 901-353-8580. My email address is [email protected]   Looking forward to hearing from you soon! Mrs. Johnson

Holly would you be interested in writing about our event? It will be held at the National Civil Rights Museum. I think it's a nice event for Downtowners to hang out and not far from home. It's called All Things ChocolateIV, An Intimate Valentine's event. This is our 4th year and it has a Live Band, Dj, Host and Comedian, 3 Course Plated Meal and Open Bar.