The Chubby Vegetarian's 5 Memphis Dishes You Should Try

The Chubby Vegetarian's 5 Memphis Dishes You Should Try

Ed. Note: Who says you can't eat vegetarian in Memphis? Contributor Stacey went on a Chubby-Vegetarian-approved food tour recently to check out the duo's collaborations with local restaurants. I hear they have a great veggie burger at new downtown steakhouse 117 Prime, too.

The Chubby Vegetarian is husband-and-wife-team Justin Fox Burks and Amy Lawrence. The two will be at St. George's Antiques Arcade this Sat. April 28 from 11 a.m. 1 p.m. and will give demos and sign their cookbooks!

Recently, I (Stacey) had the pleasure of restaurant hopping with Justin Fox Burks, who you may know as The Chubby Vegetarian. (Technically TCV is more of a brand than a person, as Justin’s wife, Amy Lawrence, is critical to the operation.) In addition to two cookbooks, Justin and Amy now have five different vegetarian dishes at five different restaurants in Memphis. Justin and I set about tasting them and talking shop one Friday afternoon. If you're looking for vegetarian options in Memphis, this food tour is for you!

In order to eat them all, Justin said we had to have rules: 1. No booze and 2. No side dishes.

Photo courtesy of The Chubby Vegetarian

Justin doesn’t receive any compensation for the dishes—only satisfaction. He’s been a vegetarian since his teens and taught himself to cook vegetables so that he wouldn’t end up as a “carbo-tarian.”

He says, “People hate the tofu - it's about the vegetables, grains and beans. It’s too easy to swap out meat for tofu. It’s ok for making the transition [to vegetarianism], but sooner or later you want to think about using vegetables in their natural form.”

1. The King's Oatmeal at Sunrise Memphis

I’ll let Justin explain that last bit. “If you take coconut and smoke it and toast it, it comes out bacon-y.” I must have looked skeptical because he added, “Ok, it speaks the language of bacon.” 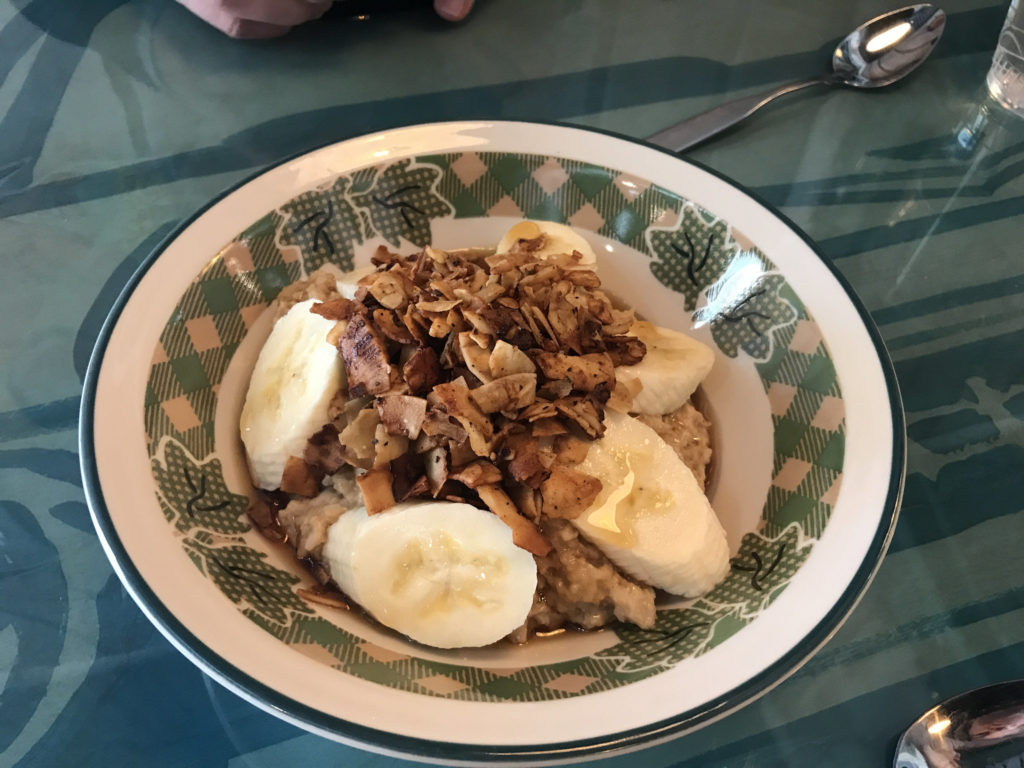 Justin loves to take vegetables and present them in a different way. He thought he might sell Ryan on his carrot dogs (yes, hot dogs made from grilled carrots!), but the chef fell in love with his superfood packed oatmeal creation. But, best of all, the coconut bacon is available as a substitute for real bacon in all of the Sunrise’s dishes. BLT, anyone?

And, yes, it really did speak the language of bacon! 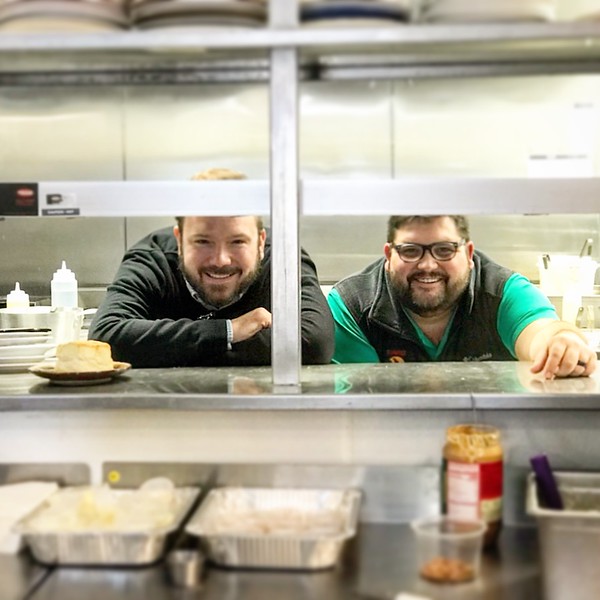 The biscuit sandwich was also remarkable. Ryan says he’s been spending a lot of time trying to get the biscuits just right. “Everyone wants to eat them in their car, so I’m trying to make them less crumbly,” he explained. (I told him people need to sit down and eat their breakfast!)

Justin noted that the bacon does hold up surprisingly well inside the biscuit sandwiches, but thinks it’s especially good on top of something. Go see for yourself. It's a great Memphis vegetarian breakfast option.

After we left Sunrise, Justin admitted that he was “ridiculously excited” about our food tour. (For the record, I was too!) “I never get to do this!” he said.

2. Vegetarian BBQ Nachos at The Rendezvous

Justin is also a photographer, and in addition to regularly producing for the Memphis Flyer and Rhodes College, he does a lot of marketing shots. One day, while he and Anna Vergos Blair (who is also a vegetarian and the Rendezvous’ Marketing Director) were making pulled pork sandwiches look beautiful, they got a little hungry.

As they were talking, Justin suggested taking the red beans and rice a bit further. “You could put it on a bun and make it a Sloppy Joe,” he told Anna. They did it that day and loved it, but a bigger conversation was sparked and the red beans and rice nachos were born. Nachos! “It's simply Brim’s chips, red beans and rice, cheese dip, barbeque sauce, and jalapeños. And it's delicious. Crunchy-cheesy-salty-spicy wonderfulness,” he says.

I couldn’t wait to try them, as I am admittedly a bit of a nacho-tarian. They really are SO good. I definitely think that any vegetarian who somehow ended up in the Rendezvous in Memphis with their pork-loving friends could absolutely order the nachos and leave happy. Heck, I did, and I love barbeque. It's great to have another vegetarian BBQ option in Memphis.

Our next stop was The Second Line for Justin’s namesake poboy, The Chubby Vegetarian. “[Chef/Owner] Kelly [English] has been incredibly supportive of us from the start,” says Justin. “It’s difficult to figure out how we’d be where we are without him.” 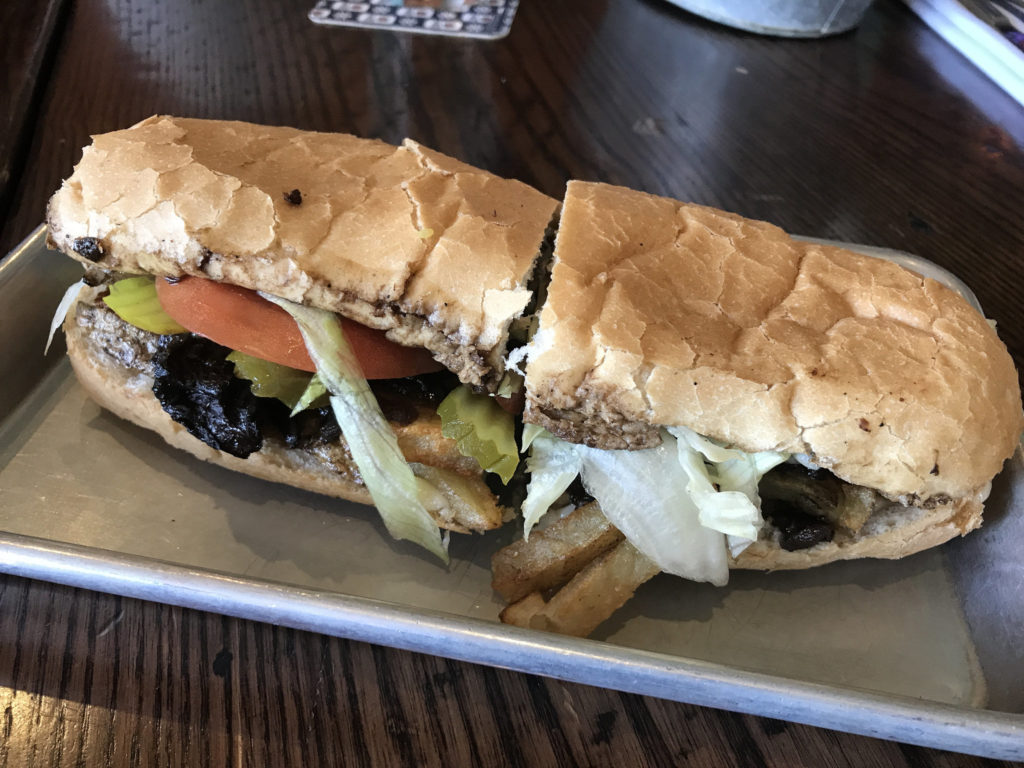 A series of fortunate events led to Justin and Amy’s first book deal. Justin landed a guest judging spot on the Food Network’s “Great Food Truck Race” when they came through Memphis, and then Kelly invited him and Amy to take over Restaurant Iris for a brunch.

They invited their soon-to-be editor to eat their food at a sold out meal in one of the City’s most elegant restaurants. “Those two things along with hard work on our proposal sealed the deal on our first book,” he says.

When the Second Line was still a twinkle in Kelly’s eye, he said to Justin, “Come up with a vegetarian po-boy, and I'll name it after you.” Justin says the prospect was nerve wracking. “Amy and I worked on it and came up with two at a time then did a single elimination tournament.” They created king oyster mushroom, jackfruit, eggplant andouille, and mushroom poboys. After one bite, Kelly said “This is it” and declared the mushroom the winner. 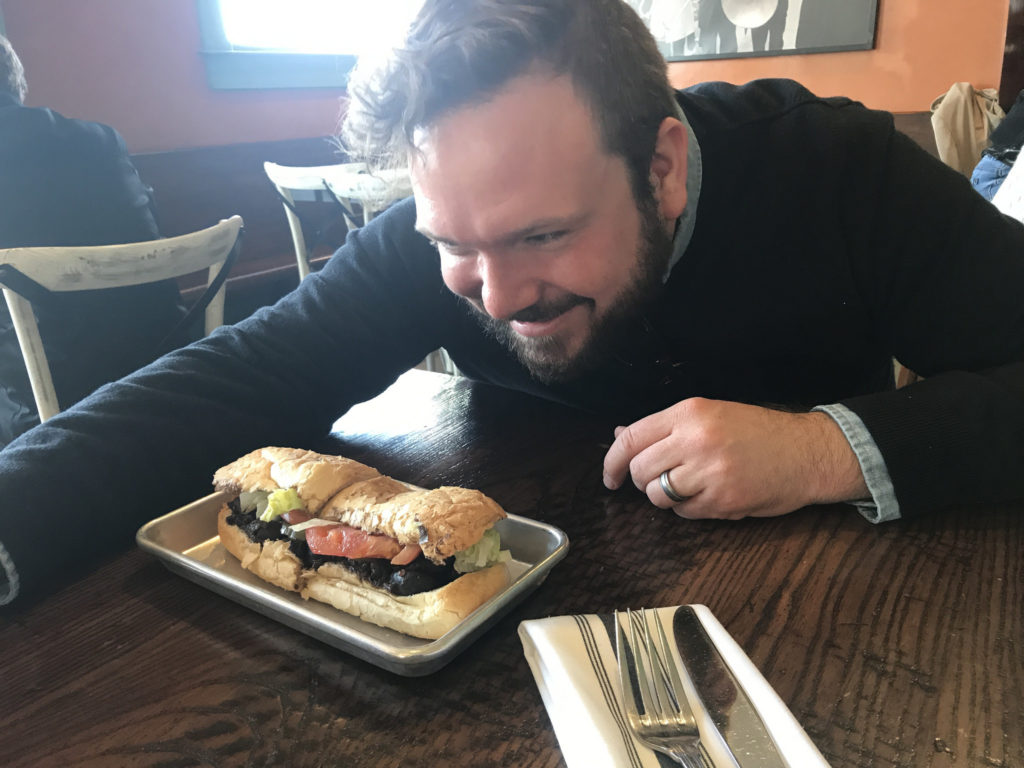 Justin used a red wine reduction and put the mushrooms in whole. The result is wonderfully messy -- the juice runs down your arm. “I gotta be honest. I love this sandwich,” says Justin. “It's at once transformative of the ingredient and also retains the ingredient. It’s not processed to the point of garbage.”

Pro tip: the Chubby Vegetarian mushroom gravy is also available on the OG poboy which is made of French fries. We tried both and made short order of them. 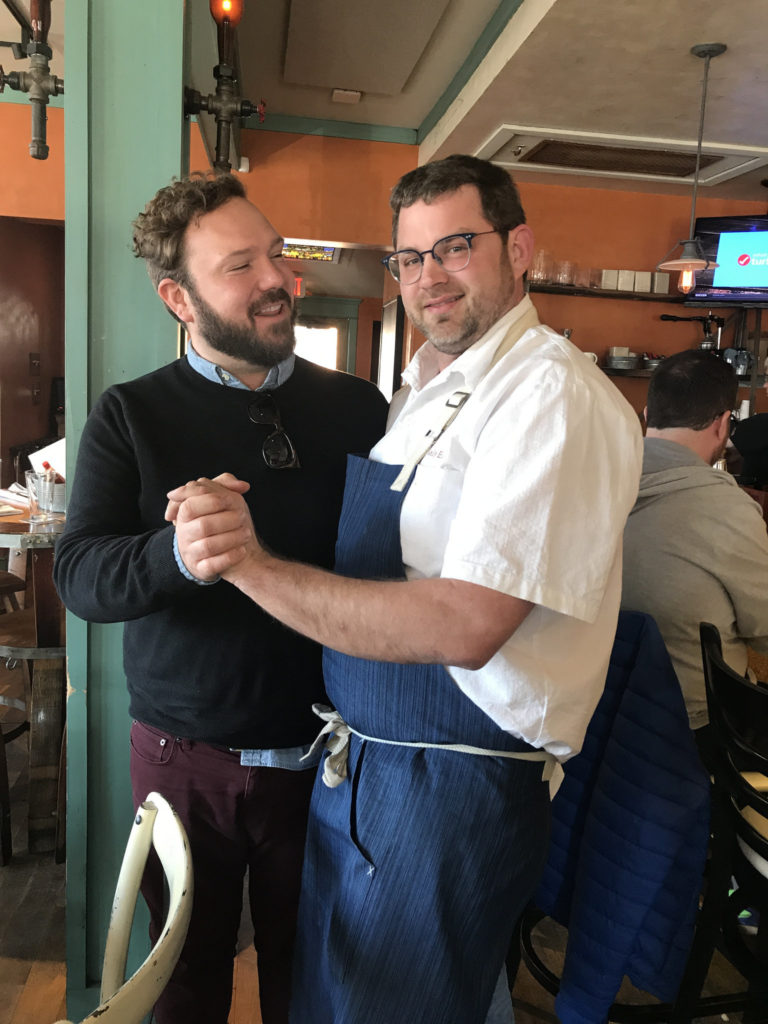 From Justin to Kelly? Photo by Stacey Greenberg

Our last stop was at City Silo Table and Pantry for the Foxy BBQ sandwich. When they were transitioning to City Silo from Cosmic Coconut, Chef Will Byrd was catering a wedding and needed something vegetarian to barbeque. Meanwhile, owner Scott Tashie went to Justin and Amy’s cookbook signing and tasted the squash ribs they made for sampling. He immediately told Will and decided to also add it to the new menu. 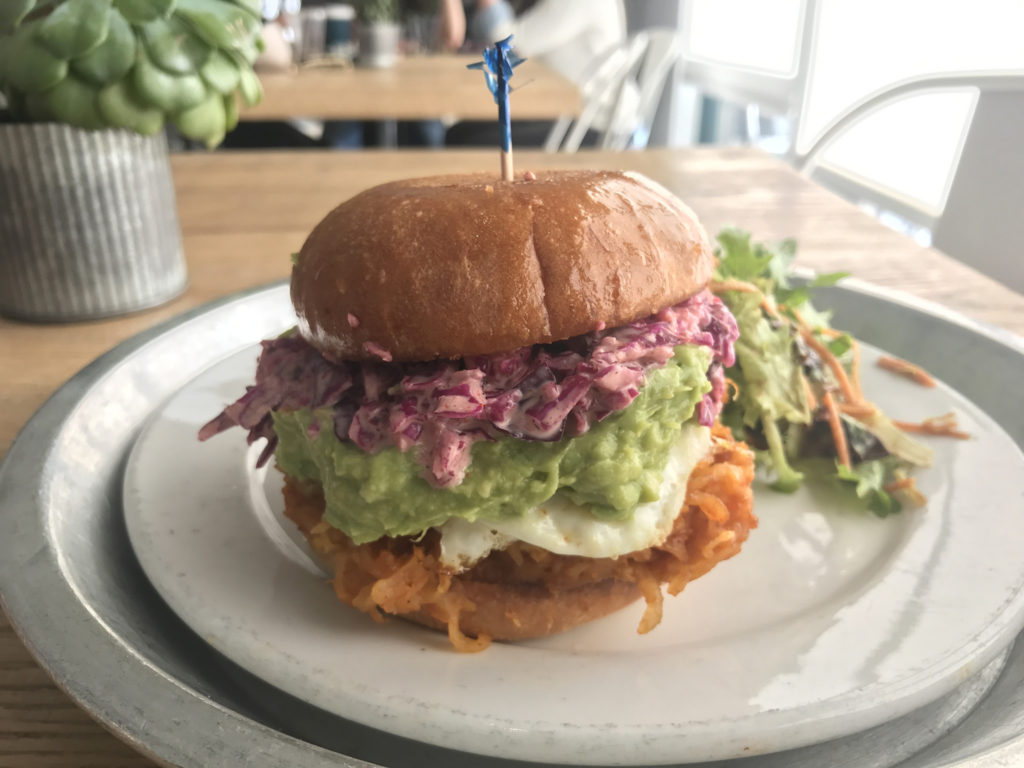 “It was important to have a good BBQ dish because I love BBQ,” says Scott. Their version uses a pulled spaghetti squash and he says it sells well, especially for customers who want to try something that’s not mainstream or are looking for a vegetarian bbq experience in Memphis.

Scott added that it took him a while to come up with the perfect name. Justin’s grandfather called him Foxy, so he immediately loved it when Scott decided on Foxy BBQ. “It was a nice hook to the past for me,” he says. 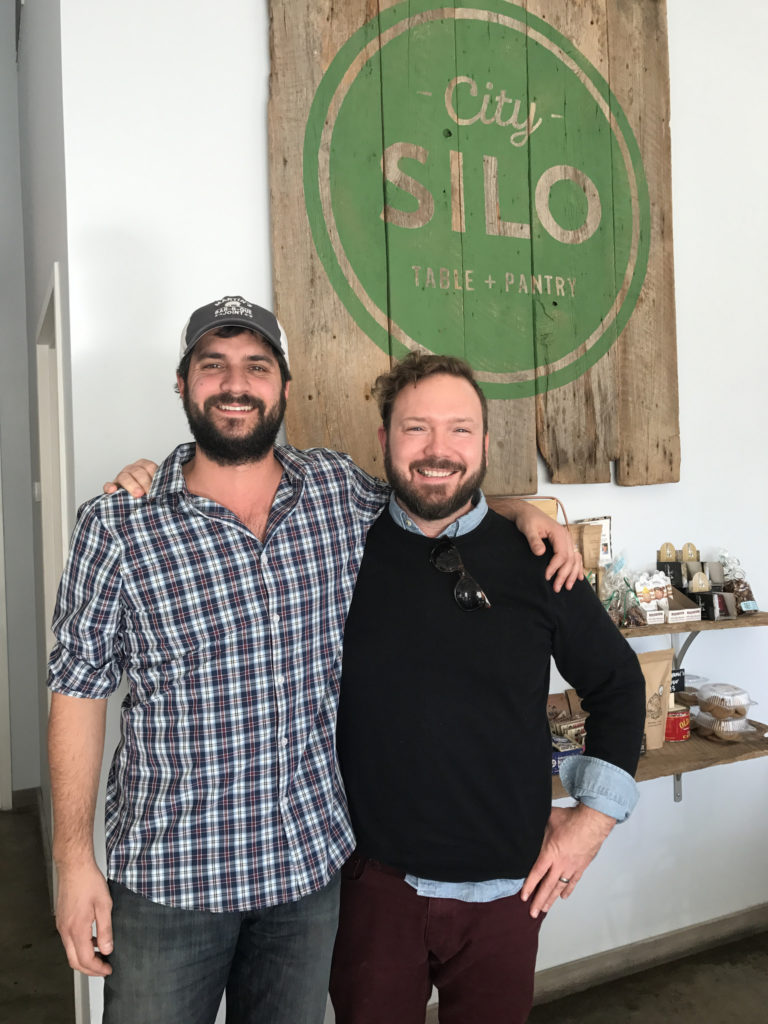 Y’all. The Foxy BBQ is aah-mazing. In addition to the squash, there’s a spicy red cabbage slaw, and the Rendezvous’ gluten free BBQ sauce. The one we tried also had a fried egg and avocado added. Wow. And yes, it totally satisfies the BBQ craving. Memphis vegetarians, take note! 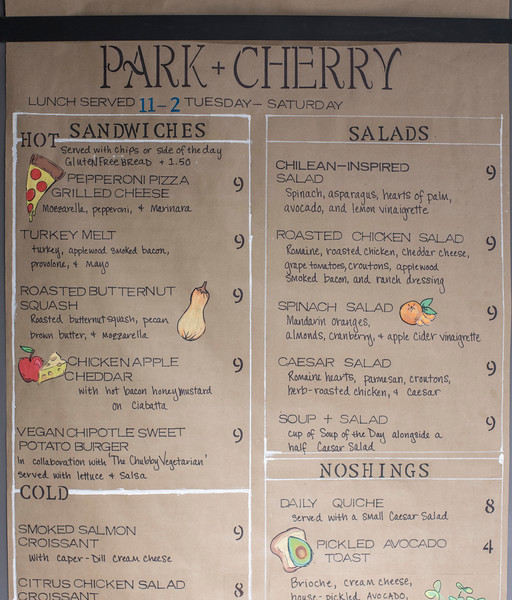 “It’s their take on it inspired by our recipe, and Justin and I love what they’ve created. The bun and the mayo are both vegan, and Justin and I appreciate that they made sure that all the components were just right,” says Amy. 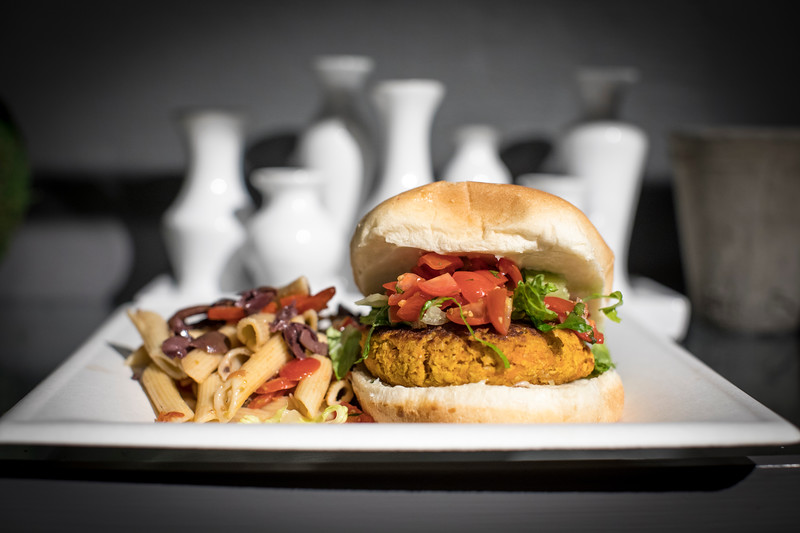 Justin doesn’t know what their next restaurant menu item will be, but he hopes there are more. “Amy and I like to innovate and then move on to the next thing,” he says. Novel’s restaurant, Libro, featured their beet ravioli for a week over the holidays. And they’ve been known to do pop ups at Iris, Etc. So, you never know! Follow Justin and Amy on Instagram to see what they come up with next. 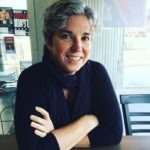