Beer and BBQ expert Blake Marcum took a field trip down to Olive Branch, Mississippi and you should, too.

Last fall, the Mississippi Ale House opened in Olive Branch, my old stomping grounds. This spot provides north Mississippi beer fans choice I never had when I lived there, so I immediately made plans to go and explore.  The first thing I noticed when I pulled up: the MS Ale House is next door to Sidestreet Burgers, one of my favorite places to eat in Olive Branch.  My beer-venture was going to be even better than I thought.

The day I went (when it was a bit warmer outside) there was a corn hole set and picnic tables out front, and the door and garage doors were both open, as if they were inviting all to come in and have a beer.

I sidled up to the bar to look at the selection of their 19 beers on tap and 17 different bottles and cans, when co-owner Derric Curran pointed me to the digital beer menu on the wall.  I quickly ordered a flight of five samples for $10.  When I asked about the some of the beers I had never heard of and where they were from, that’s when things got really interesting. Derric and his fellow owner Alistair Clark informed me that their goal when they opened was to only serve beers that were brewed in Mississippi.  This was a fun concept to me, as there is a growing number of breweries, especially down in the Gulf area and middle Mississippi that I haven’t tried yet.   The pair told me that in just a few months of operation they’ve had to serve other beers outside of their home state due to distributor issues and to keep up with demand, but they were happy with their selection.

Have you been to the @mississippialehouse in Olive Branch yet? Our resident beer expert @memphisb went to check it out, and had some seriously good eats at SideStreet Burgers, too.

I got my five sample flight, delivered to me on a custom-cut board. As I was enjoying a 1817 Mango Wheat beer (6.6% ABV, from Okalona, MS) I asked Derric about the “Buddy System” on one of the chalk boards.  He explained it was so people could purchase beers for friends who were not there. It's a Pay it Forward board, for beer, so when that friend arrived, their first beer (or several) was paid for.  I think this is brilliant, and would enjoy seeing this concept grow to breweries and other bars! 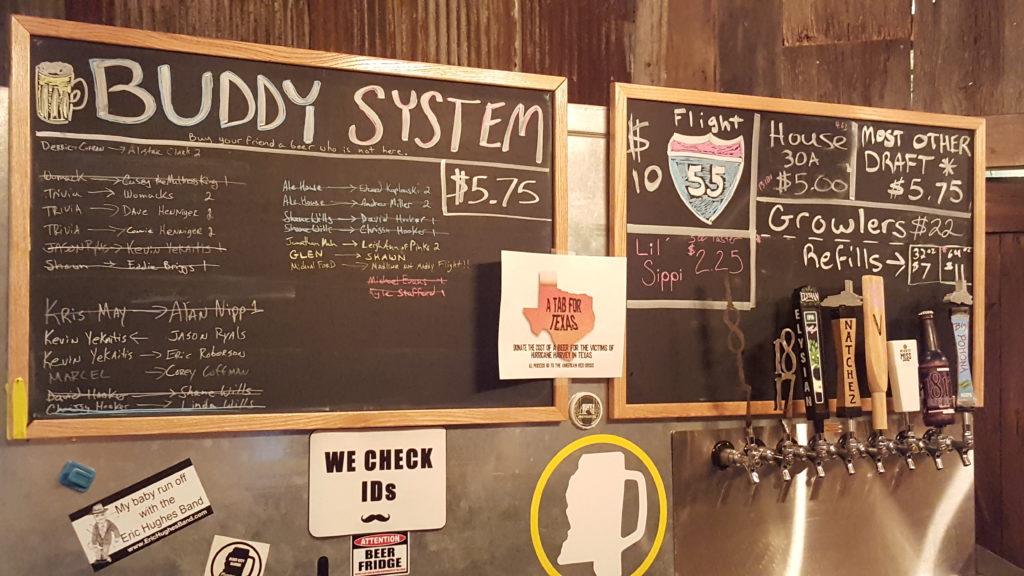 As far as activities beyond drinking beer go, I was there during their Wednesday trivia night and was told they sometimes have live music, and saw board games around the taproom.  The star of the show was their Atari corner, which featured a modified Atari system with all the games you could ever want.   I was instantly transported back to my childhood and enjoyed a few games with my beer.  I enjoyed it so much that I went back during their Oktoberfest party and enjoyed all the fall beers you could want to round out a fun day of drinking. MS Ale House does not have a food menu, but they allow outside food to be brought in. I noticed Sidestreet burger menus at the bar when Derric got a call on a walkie-talkie and announced “Brian your order is ready.”  I saw someone (I assume Brian) get up and walk over to Sidestreet.

When I asked if I could order Sidestreet from the ale house, they said no, but patrons can call in a to-go order at Sidestreet and their kitchen staff will radio over when the order is ready for pick-up.  I absolutely love this, too. Later, I walked over to Sidestreet burgers to enjoy some of Chef Jonathan Mah’s new creations.  Jonathan previously worked at such places like Erling Jensen’s, so he brings a lot of new ideas to a burger establishment.  I went in fully expecting to get a burger, but it took his staff less than a minute to convince me the Fat Panda was the way to go.  This sandwich piles Korean-style marinated sirloin, sriracha mayo, and fresh cilantro on top of toasted French bread.  The marinade of the sirloin is sweet, then you get the spice of the sriracha to balance it out. Incredible. 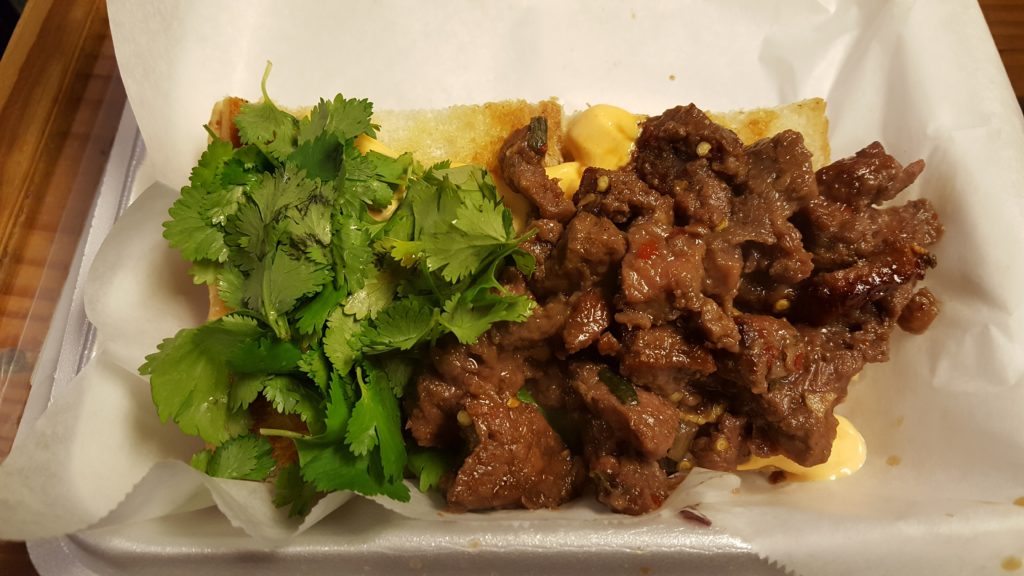 Due to the staff’s urges, we also ordered the Sriracha Chicken Bacon Ranch Quesadilla, which was exactly what it sounded like and was good, but was not the star of the menu by far.  We did add some Old Bay potato wedges to the order, as Sidestreet does not offer fries.  Having been to Maryland before, I know how good Old Bay is on just about anything and they did not disappoint. On my next visit I’m going to get the Sidestreet burger or the Turkey Kefta burger and loaded potato wedges, while enjoying a few beers over at the Mississippi Ale House. Mississippi Ale House hours: Sunday-Monday: closed Tuesday-Wednesday: 3 p.m. - 9 p.m. Thursday-Saturday: 11 a.m. - 10 p.m. Sidestreet Burgers hours: Sunday: 11 a.m. - 6 p.m. Monday-Saturday: 11 a.m. - 9 p.m.  Cheers! Go there:  Mississippi Ale House 9211 Old Hwy 78, Olive Branch, MS Side Street Burgers 9199 Old Hwy 78, Olive Branch, MS 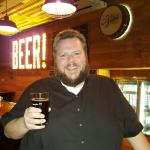 Blake was born and raised in the 901 and now lives in Midtown, helping people vicariously live out their dreams on social media, if those dreams involve beer and barbecue.  He’s a contributor to I Love Memphis,Memphis Travel, and MemphisCraftBeer.com.  A Grand Champion of BBQ Fest (2013) and BBQ judge, he really knows BBQ. Pairing that with his love of craft beer, he’s a great representative of the fun side of the Bluff City.  Blake loves the investment going into Memphis and believes the best is yet to come. Follow him on Twitter at@blakeandbrew.

Blake writes about beer and barbecue.