Eat Breakfast At The Liquor Store

Eat Breakfast At The Liquor Store

There’s so much to love about Broad Avenue’s latest addition. Let’s start with the name: The Liquor Store. It used to actually be a liquor store, and it still had a really cool sign, so owners Lisa & Luis Toro (who you know from nearby City & State) decided to roll with it.

Now, it’s a Latin-infused, diner-inspired spot that also sells booze. I’m sure I’m not the only one who has caused confusion by saying something along the lines of, “Let’s go to The Liquor Store for breakfast!” It’s ok. People will eventually catch on. Everyone knows what it means when we say, “We’re brunching at The Beauty Shop,” right? 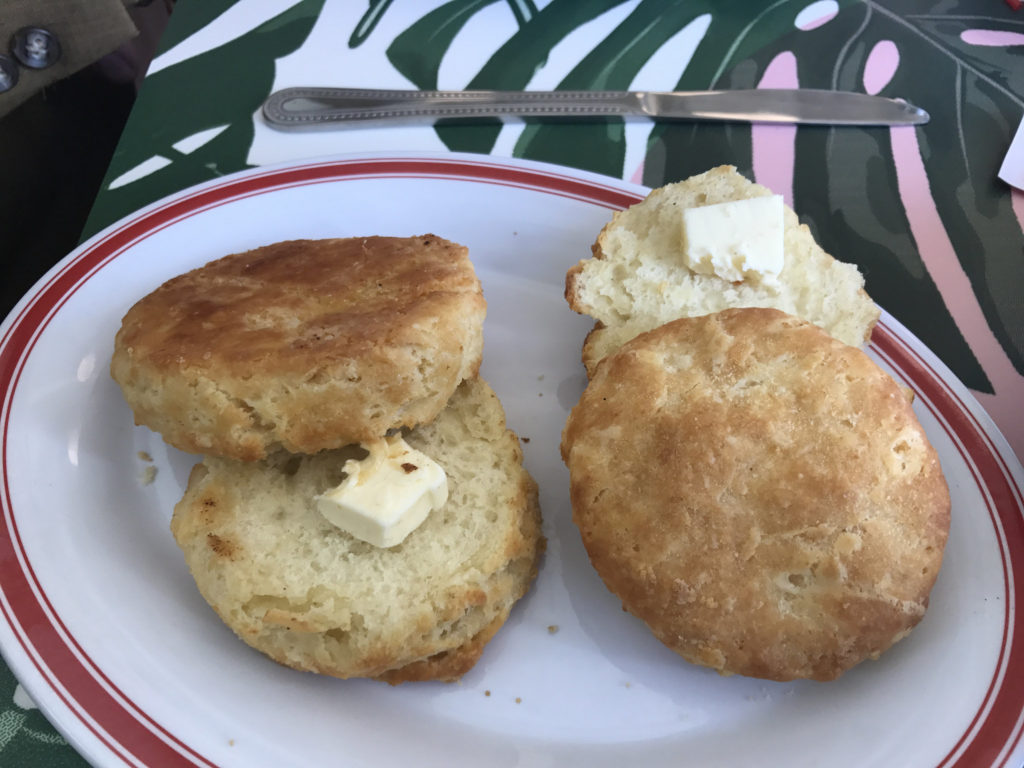 Another thing to love about The Liquor Store is that they serve breakfast all day. All. day. That means you can totally sleep in and still get your fill of homemade biscuits with white shiitake gravy, a stack of pancakes, or a classic plate of breakfast classics. 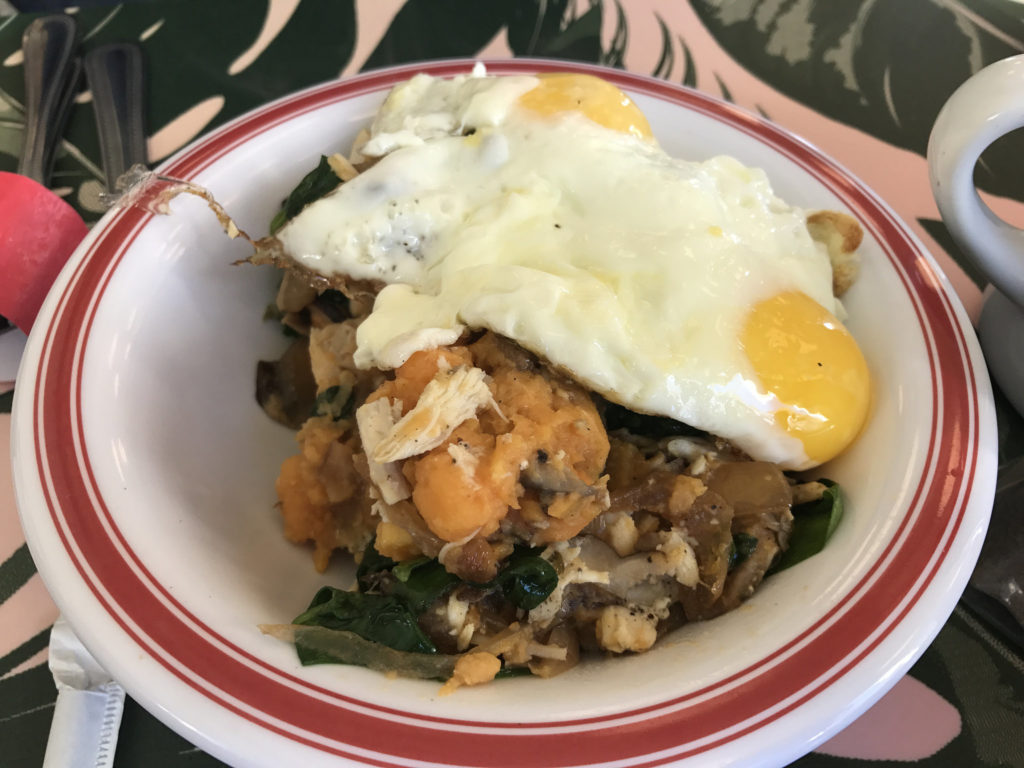 My favorite breakfast item on the menu is the sweet potato hash. It’s a bowl full of cubed sweet potatoes, caramelized onions, and spinach. Then you get a fried egg on top and your choice of chicken or Cuban pork. (Go with the Cuban pork.) 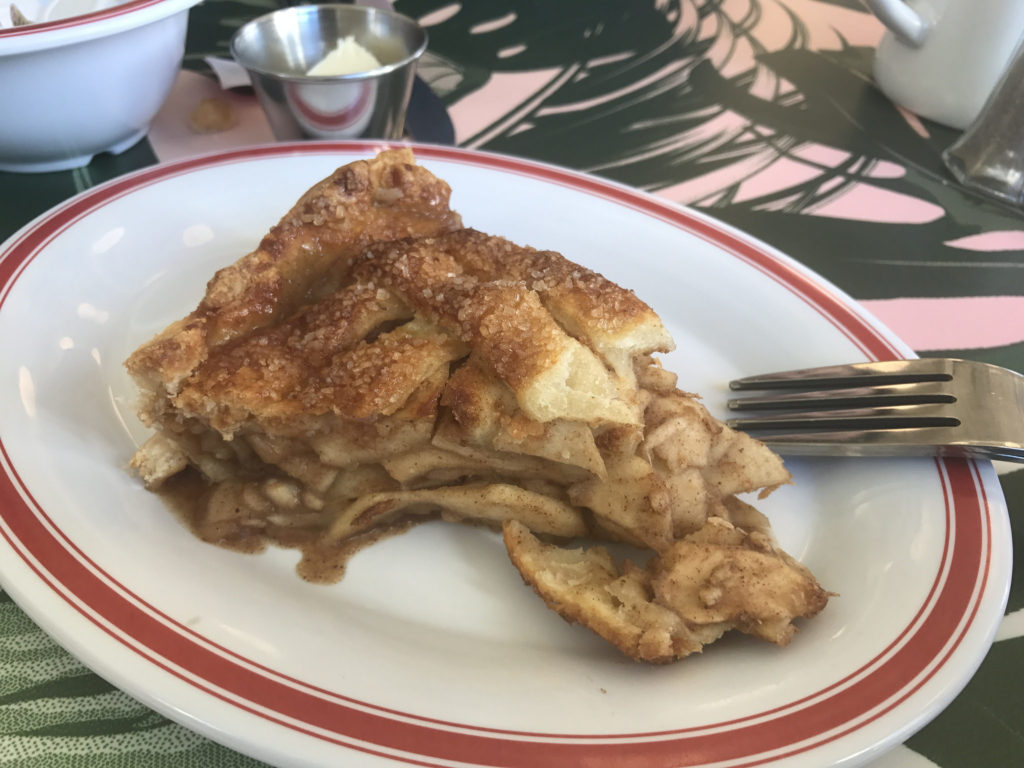 When you walk in to The Liquor Store restaurant on Broad, go ahead and let yourself drool over the pie case. Chances are it’ll be chock full of decadent pie choices, all made in house by Ali Rohrbacher, who also bakes all of the bread they use. Then, you can decide right away if you’re having pie for your meal or attempting to save enough room for dessert.

I have some suggestions for non-pie based meals: 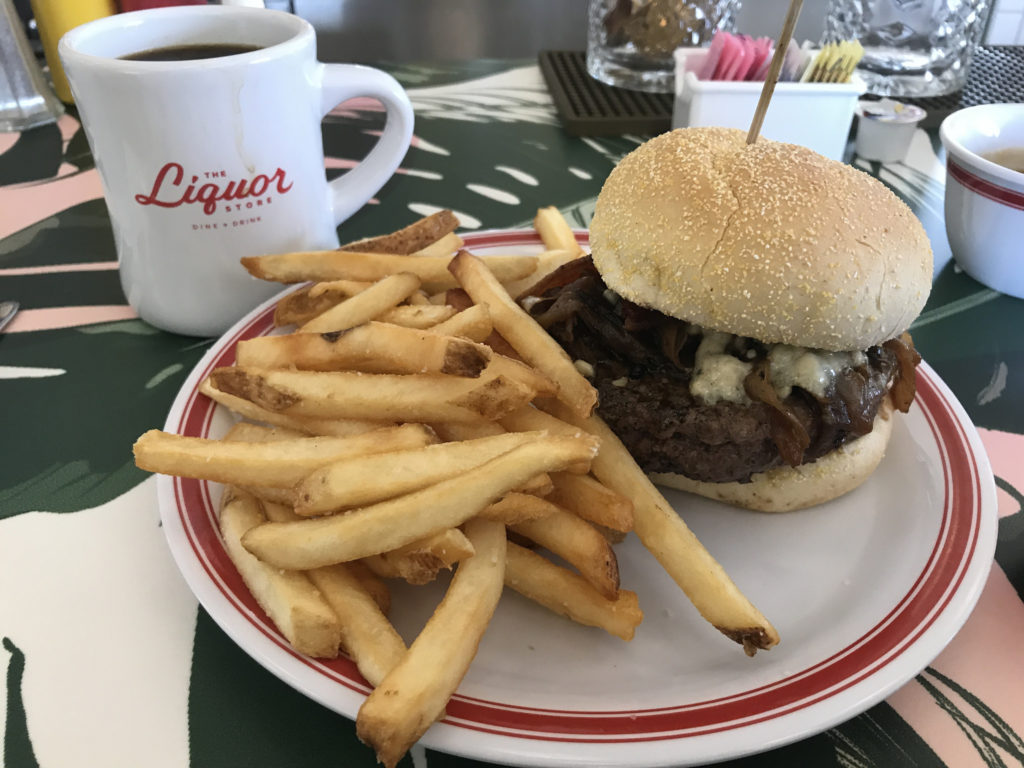 The Cuban, served on a house-made Cuban loaf, features roasted pork, ham, Swiss cheese, dill pickles, and French’s mustard. It comes with house-made plantain chips. The grilled cheese has not one, not two, not three…not four…but FIVE cheeses. It comes with some mighty fine creamy tomato soup.

I have not explored the dinner menu (because: breakfast all day), but owner Lisa Toro says the Salisbury steak smothered in shiitake mushroom gravy is her fave. The Cuban platter (black beans, yellow rice, plantains, and seasonal vegetables) is a favorite among the vegetarians. And the warm crab dip has gotten a lot of facetime on social media. 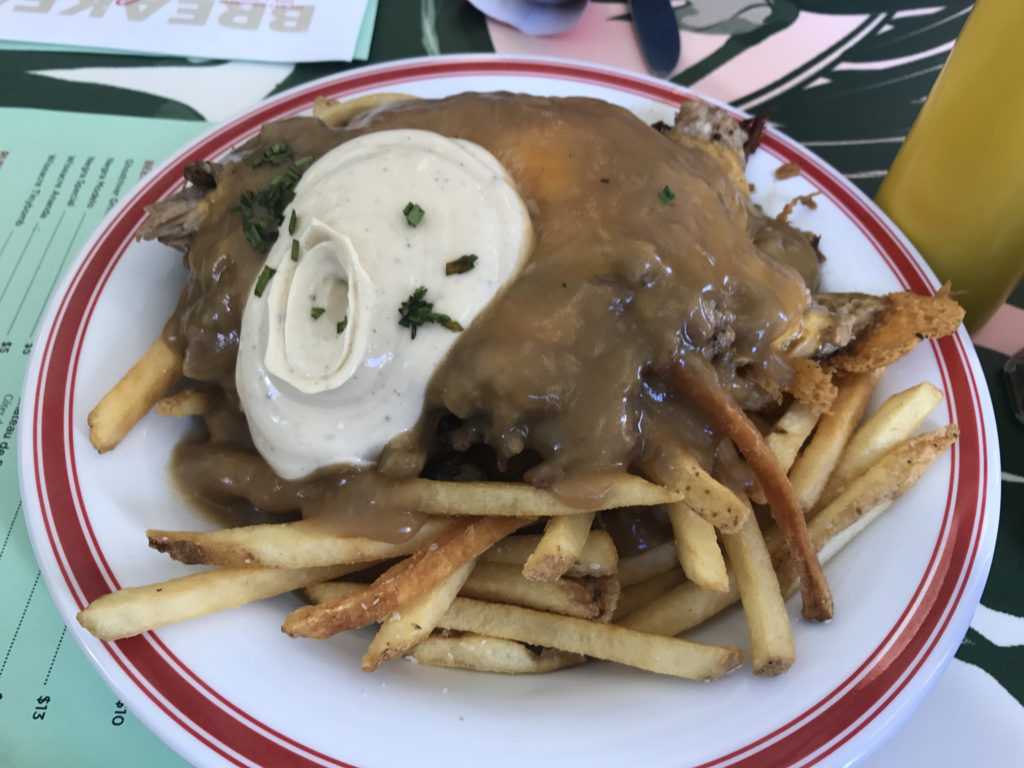 My number one go-to on the menu is the Loaded Fries, and I have found through tireless research that they are good any time of day. To start with, the fries at The Liquor Store are perfection. They’re thin, but not too thin, and perfectly crispy with just the right amount of salt.

When the fries are loaded up with cheese, the above-mentioned Cuban pork, brown gravy and –look, I’m just going to say it—an orgasmic aioli, they are everything. They’re big enough to share, and if you’re only going to try one thing, this is it. If you must have just a simple side of fries, at least request a side of brown gravy for dipping. 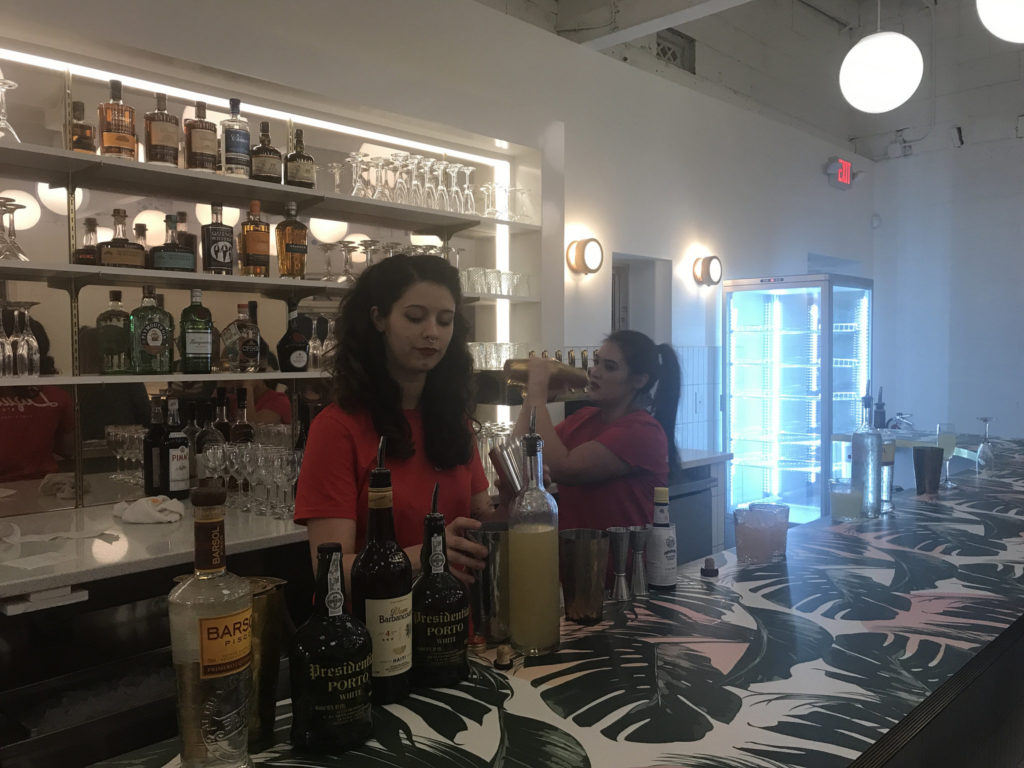 Another thing: The Liquor Store is so pretty. It’s basically a fantasy CK’s where everything is shiny and new, the food is amazing, and there’s a full bar. It feels very homey, and the chairs are all super comfy. The tables and bar top scream, “Instagram me!” And oh, how I puffy-heart all that neon. Now, if we can just convince them to stay open all night. As of now, the latest they are open is 10 p.m. on weekends. 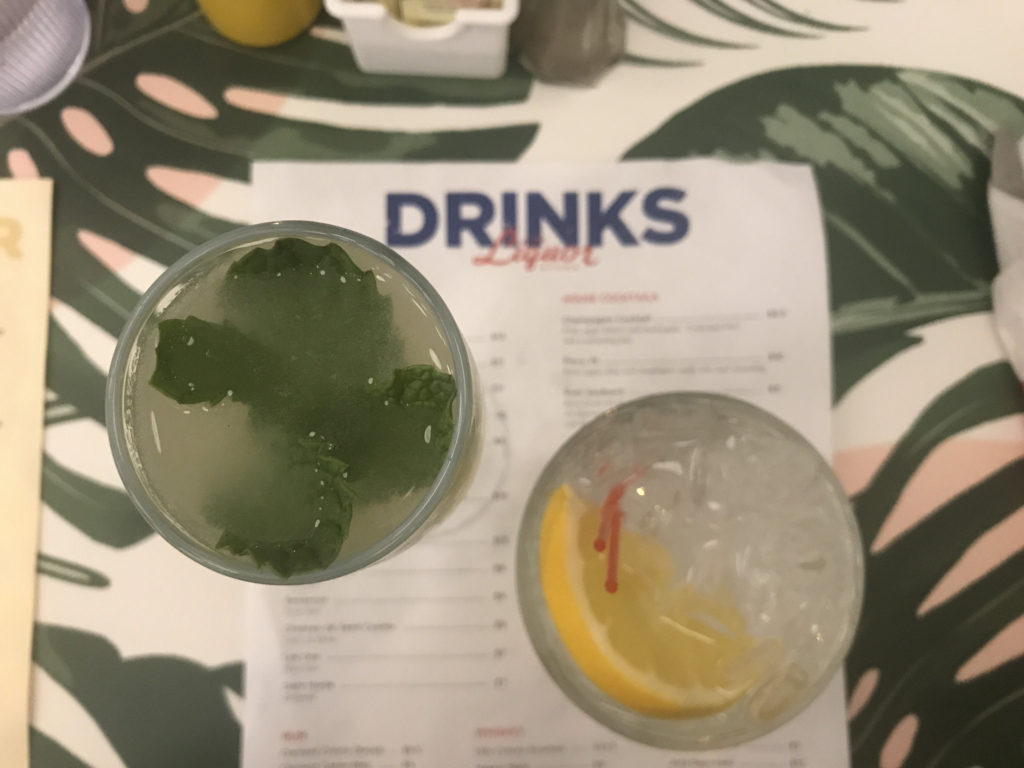 We’ve gotten this far and I haven’t even mentioned the alcohol. There are six house cocktails created by Vincent Hale and Josh Conley. Just start at the top and work your way down. However, if you must choose, try the champagne cocktail or Pisco 75. There’s also about a dozen wines, including Cooper Mountain Vineyards, and a nice crop of beers to choose from on tap and in bottles. (There’s even a selection of 40s for the budget minded.)

The best part about the bar? It’s going to be one of TWO bars come spring. If you peek outside you can see a killer patio in the making. Flanked on three sides by shipping containers, one of the containers will soon house a second full bar. Now picture Astroturf and string lights and more comfy chairs, and well, they’re basically going to have to call the cops to get me out of there once the warmer temps return. 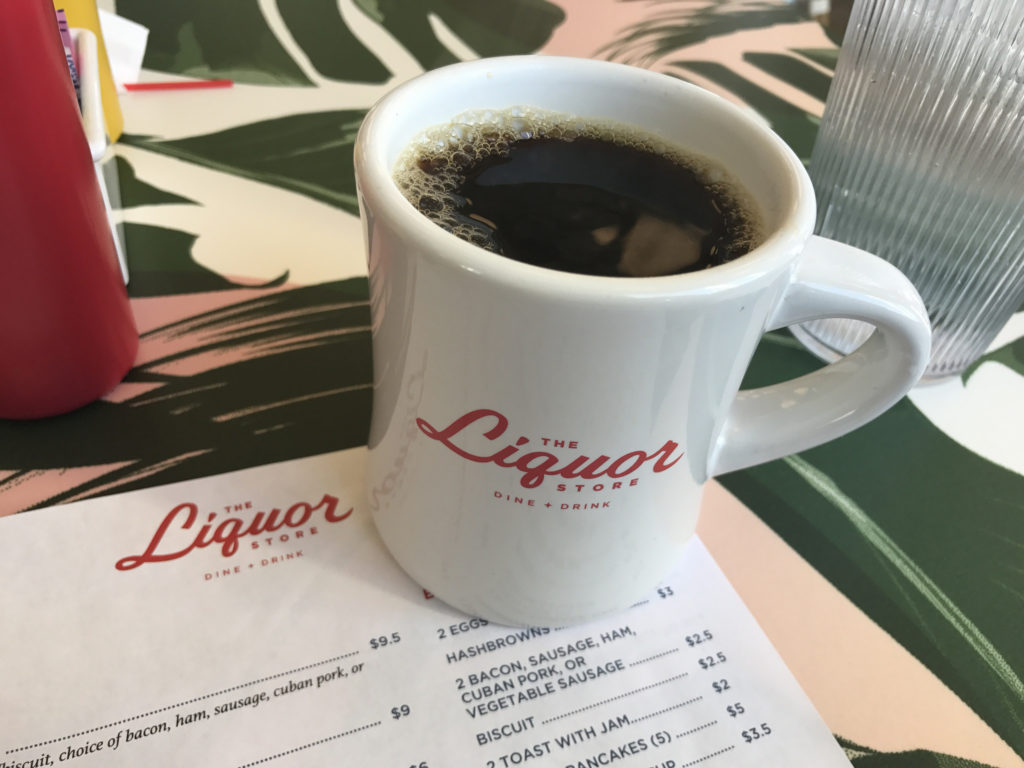 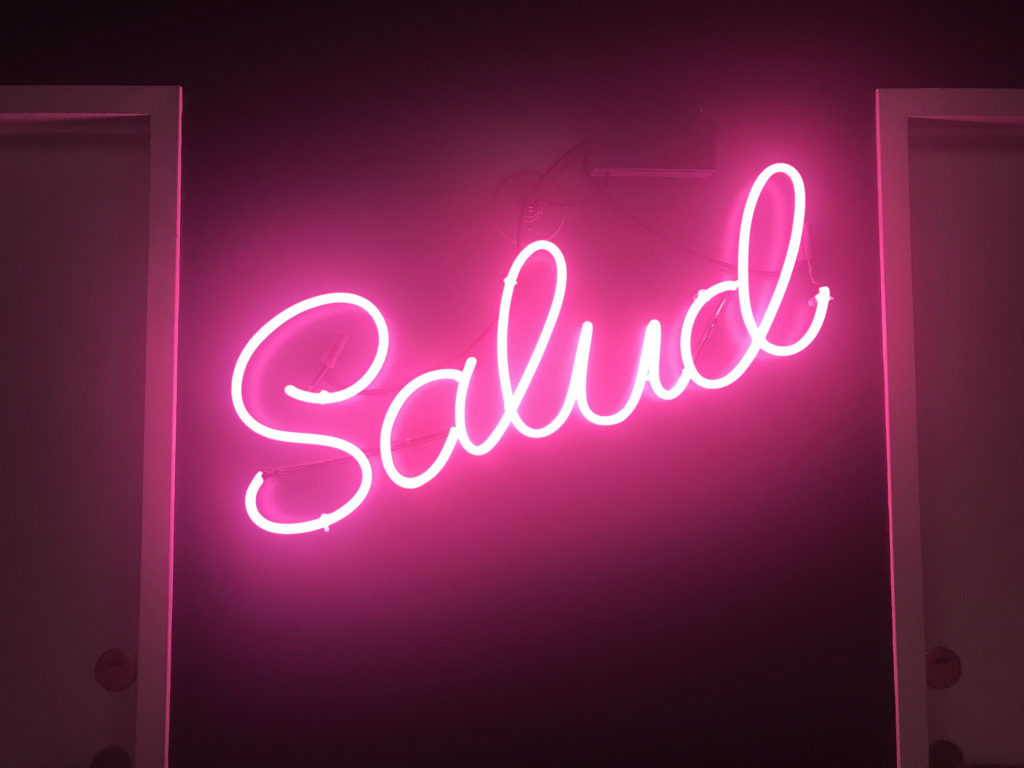 Hi! I love your review about the Liquor Store and would like to go Monday, New Year’s Day. There’s no phone number on their website and the one I got from Information isn’t working...strange. I sent an email but didn’t get a response...also strange. If you can find out if they’re open, and also if they take reservations (5 people) let me know. Thanks so much. Happy New Year!

Hi Laurel! I did see on their Facebook page that they would be open tomorrow, but I am not able to take or confirm reservations for the restaurants we write about. Maybe you'll be able to reach them then? I'm sorry about the trouble you've had and I hope you have a great meal and a lovely New year's Day in Memphis! https://www.facebook.com/thebroadliquorstore/posts/2015795148437233