Ever since taco/tapas joint Babalu opened in Overton Square a few years ago, I'd been hearing about their allegedly amazing Babalu burger. It's called the Baba Burger on the menu, and people are claiming that it's one of the best burgers in Memphis. 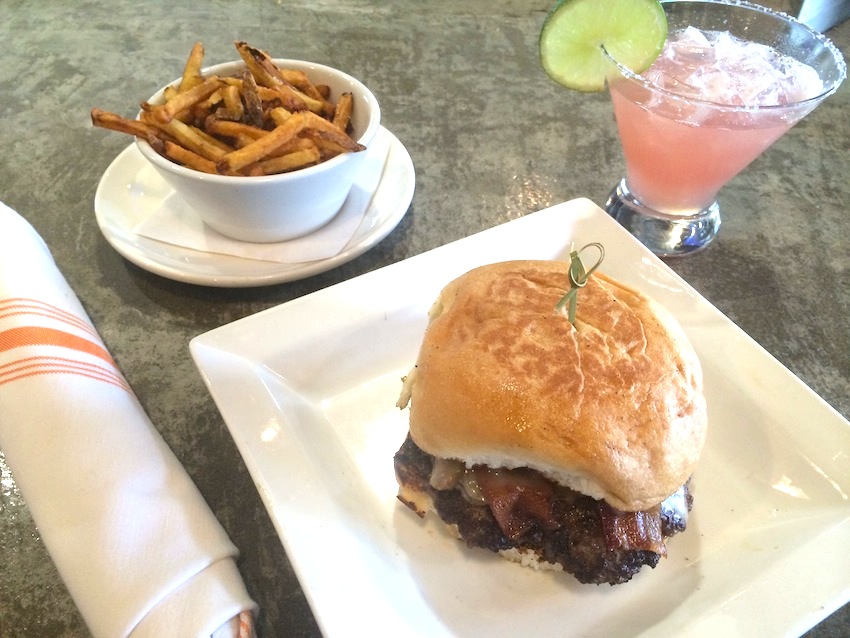 While I went after Babalu's opening to try tacos and tapas, there were several other new burger joints that opened in 2014 (see here, here, and here) that I didn't make it back around to try theirs right away.

"It's the best burger in the city."

"It's the best thing on their menu."

"The Babalu burger is the best thing I've ever tasted!"

And so, I finally went back to try it. I went at about 2 p.m. to avoid a crowd - it seems like Babalu always has a long line out the door at dinner time. The dining room was barely half-full this late in the afternoon, and I sat at the bar and ordered a Babarita, a Baba burger, and a side of fries. 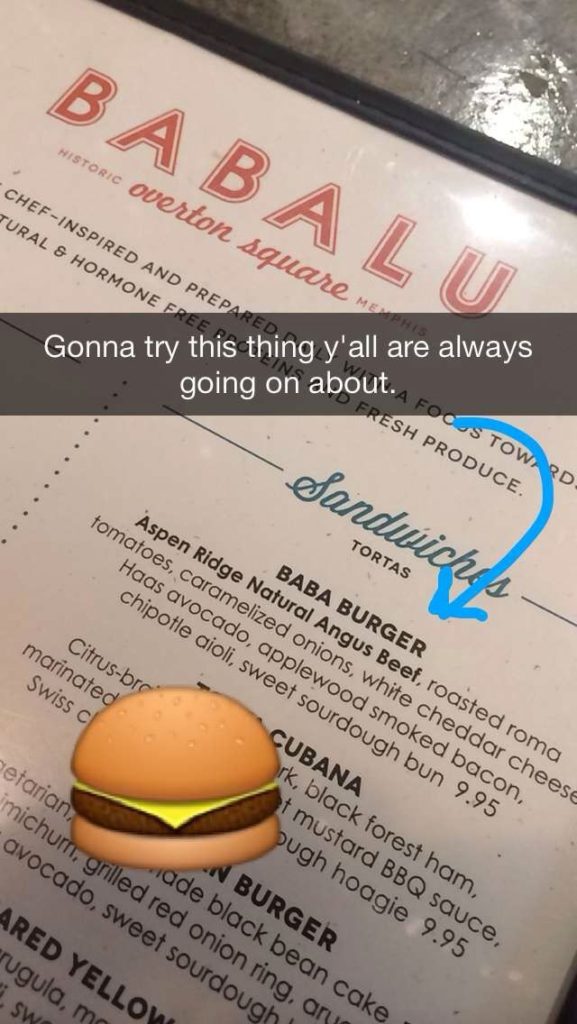 As you can see from the menu shot above, it has all the components of a trendy gourmet burger: a) a roasted vegetable, b) a cheese that isn't American, c) bacon, and d) some kind of aioli. At $9.95 + $2 for fries, this is on par or less than the price of other souped-up burgers in Overton Square.

In this case, you get roasted tomatoes, white cheddar, bacon, and chipotle aioli, plus caramelized onions and avocado. I wasn't surprised that the bartender reiterated what everyone else had said. "Good choice, the burger is my favorite," she cooed after I ordered. I was a little surprised, however, that she didn't ask what temperature to cook the meat.

I enjoyed my Babarita (a margarita with a splash of pomegranate juice) while I waited. It's big and strong. If you're going to pay $11.50 for a margarita, it ought to be just like this - I pretty much order it every time I go. Then, I only had to wait a few minutes before my food arrived. 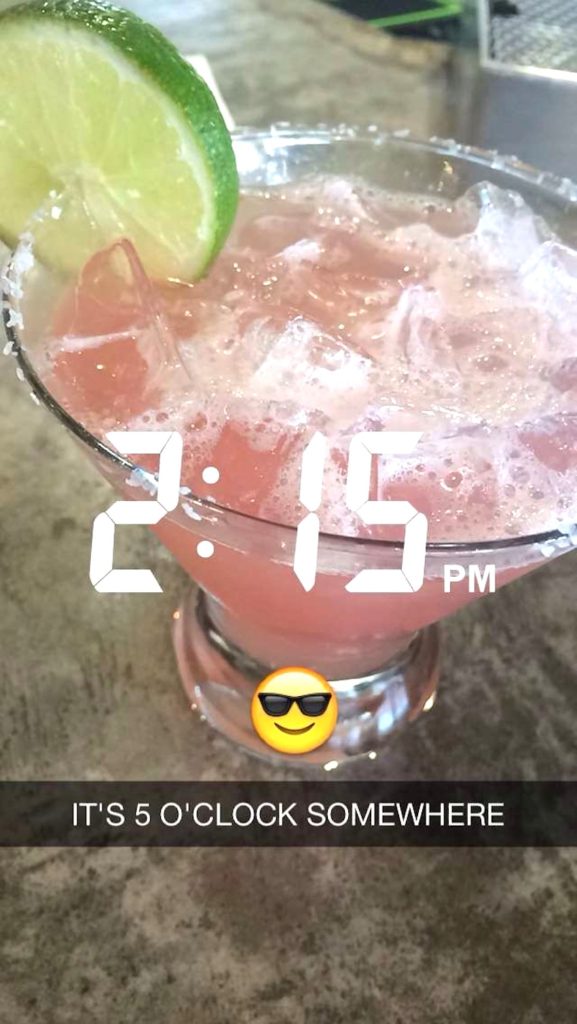 I'd heard from an unofficial source that the patty was comprised of beef mixed with ground lamb, which made it "so succulent", so I assumed this would be one of those thick, juicy patties you get at gastropubs. The actual dish looked very good, but it reminded me more of a greasy-in-a-good-way bar burger. It also explained why I wasn't asked for a temperature - it's not really that kind of burger. 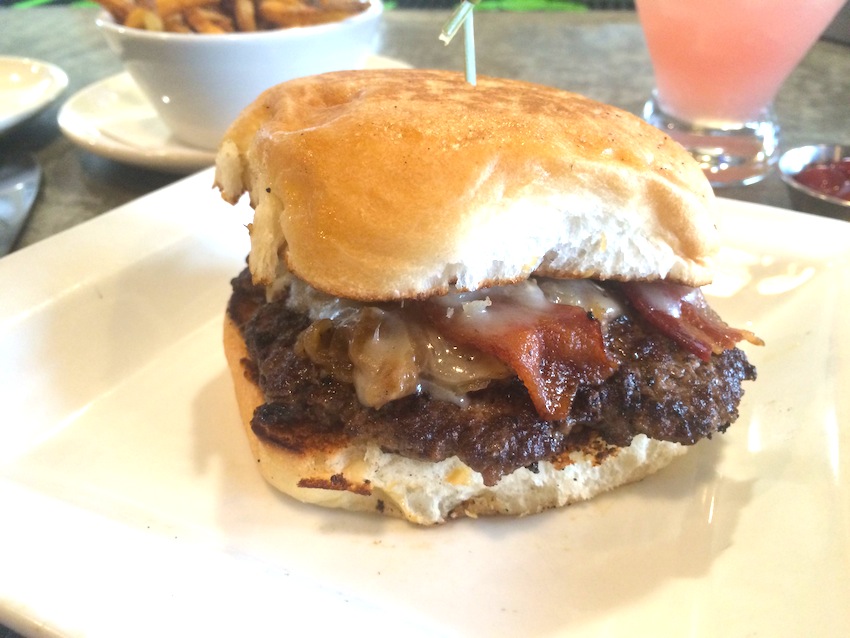 The two strongest flavors were the bread and the chipotle aioli. The sourdough bread is super sweet; it's basically Hawaiian bread. The generous portion of aioli gave the whole situation a strong, peppery kick. The meat - once I liberated it from the creamy conglomerate of other toppings - was tasty. I couldn't tell if there was lamb in it or not. If you like all of those things, you'll love this burger. 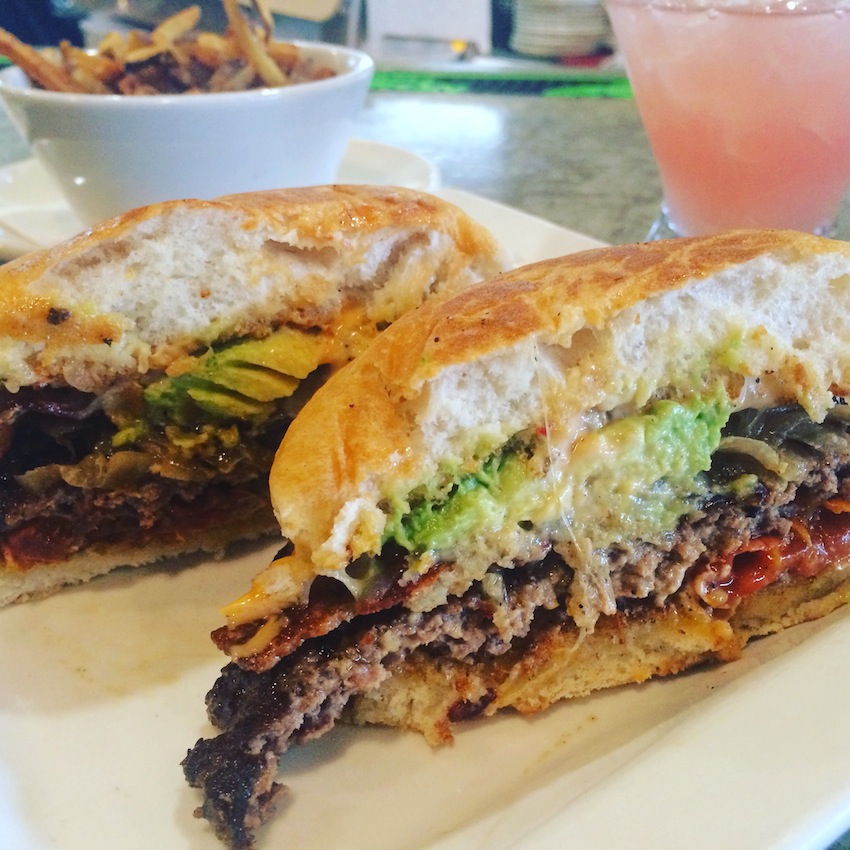 I could only finish half, but that Babarita had me feeling a little "treat yo'self" (I told you it was worth the money) and I remembered the chocolate cayenne truffles I'd had ages ago...so I decided to spring for dessert.

The bartender listed off the desserts, and while I didn't hear her mention the truffles, she did say that they had a sampler with cheesecake, spicy fudge, and bread budding. So guess what I picked. 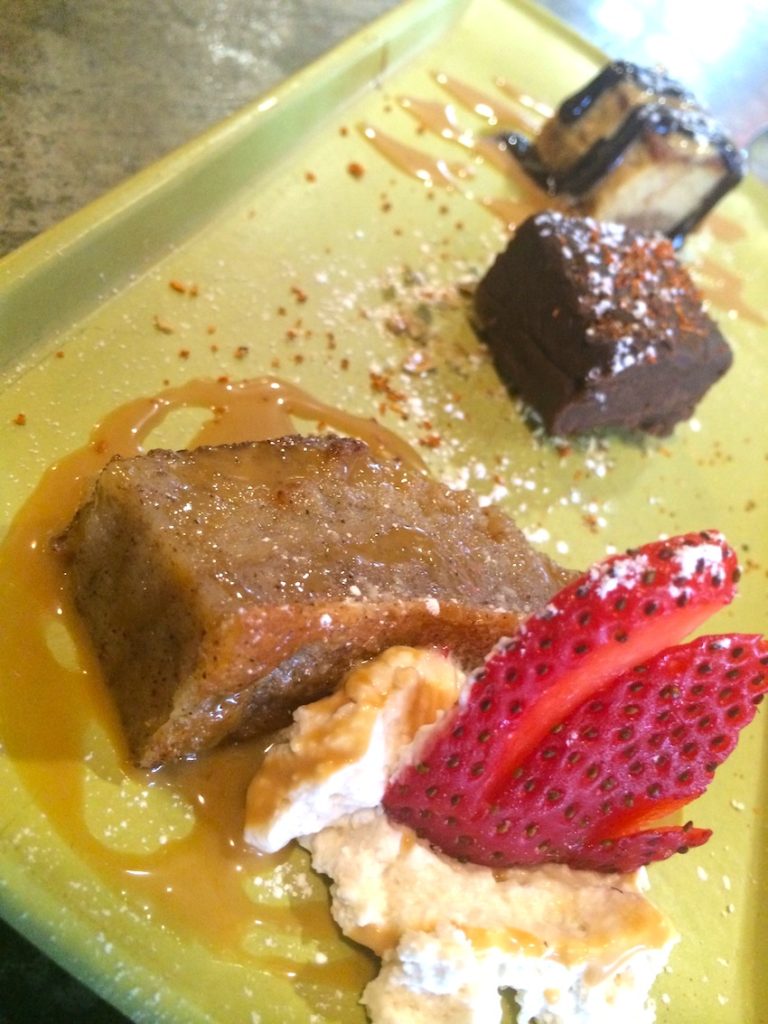 I liked how the spicy fudge was something different, and that it was garnished with pistachio crumbs, but the standout was the bread pudding. It's soft and sweet and the sauce was lovely. Would order again.

If you're one of the Baba burger evangelists, let me insist you try some burgers from Roxie's or Alex's Tavern, a stuffed turkey burger from Mot & Ed's, or a Soul Burger from Earnestine & Hazel's. Check out this burger post, too.

If you haven't yet tried this infamous Memphis burger, keep in mind that it's a lot of people's favorite thing ever, so it's worth a taste. I'd love to hear your opinion.

If you're looking for something lighter, I recommend the sesame encrusted tuna (in the "small plates" section). I had it a few months ago as a snack and I was impressed with its freshness and flavor. Click here to read more about Babalu.

Apparently, you weren't as impressed as many others have been. Could be attributable to over-hyped expectations! As for me, I've had many a burger around these parts, including 3 of the 4 you mention to try. In fact, I used to co-own a joint that whipped up (still does) unquestionably Memphis most famous, most awarded such offering! The Bababurger is certainly among the best I've tried in this city, and most others, and beats the ones you mention that I've sampled! Is it the absolute best? Maybe, but it would be too difficult and too presumptuous to be that definitive.

I was not impressed with the Baba burger. It looks amazing, and it is certainly decadent, but it's not very flavorful. I think your assessment of the creamy conglomerate of other toppings opaquing the meat flavor was very accurate. Right now my favorite burgers in Memphis are from Burger Joint, DKDC, and Next Door.

Flavor is the whole ballgame! What's interesting is that the Baba B's amazing meld of flavors is what elevates it to the heights for me, but you say it likes flavor! Hard to figure, except to say different strokes for different folks, and that we're lucky to have such an abundance of choices!

I enjoyed this piece though I've not tried the Babalu Burger yet. You mentioned that you weren't asked what temperature to cook your burger. Maybe they had it right? My reply is always "a safe temperature." Ground beef isn't sterile. It should be at least 160 degrees according to FDA because of the potential danger of E. coli. Some of Memphis' famous hamburger places don't understand this concept and routinely serve undercooked burgers even when asked not to, and even to kids who are most at risk for fatal illness. Judging from the puzzled looks I've gotten, I doubt the restaurants even stock a food thermometer. Because I work in food safety and read about this every day, I stick to the veggie burger because I don't trust them to get it right. Maybe Babalu does?

I am usually a bit hesitant when I see burgers with ingredients like veggies and flavored aiolis, but I have to say the Baba is one of my favorites because of the way the flavors meld. Another one to add to your list is the burger at Local Gastropub with gooey American cheese and grilled onions, so good!

It's an ok burger, certainly different but the overcooked beef leaves something to be desired. I'd recommend Rizzo's burger. It doesn't show up on many best of lists and I think it's one of the best in Memphis. Or drive to New Orleans and get the burger at Luke; my favorite.