This Sunday, the Commercial Appeal will release a special edition magazine to celebrate 175 years as Memphis' daily newspaper. Inside it are excerpts and photos from the pages of the paper from April 21, 1841 to present day.

I sat down with an advance copy this week, intending to flip through quickly and then read more later. I ended up reading the entire thing in one sitting. You can get yours on Sunday, and they'll have a website up starting then at 175moments.com. 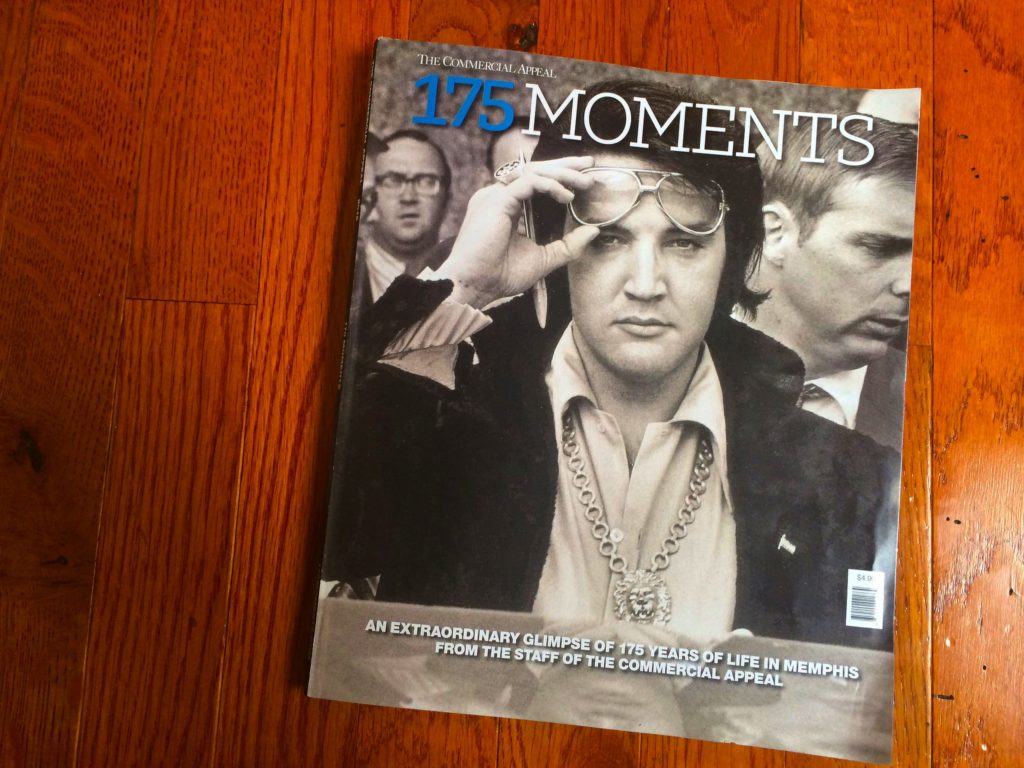 175 Moments has the good, the bad, the ugly, and the beautiful of the last 175 years in Memphis. The editors of this publication didn't pull any punches. Included are the absolute toughest moments our city has faced, plenty of controversy, and stomach-turning racism. But there are also triumphs, moments of great joy, humor, and plenty of be proud of. Also lots of fires. Things caught on fire a lot.

While I found all the topics I expected (Elvis, sports, the Civil War, FedEx, Martin Luther King, Jr., politicians, St. Jude) there are many unexpected, lighthearted ones. Out of those, here are my top five in no particular order. 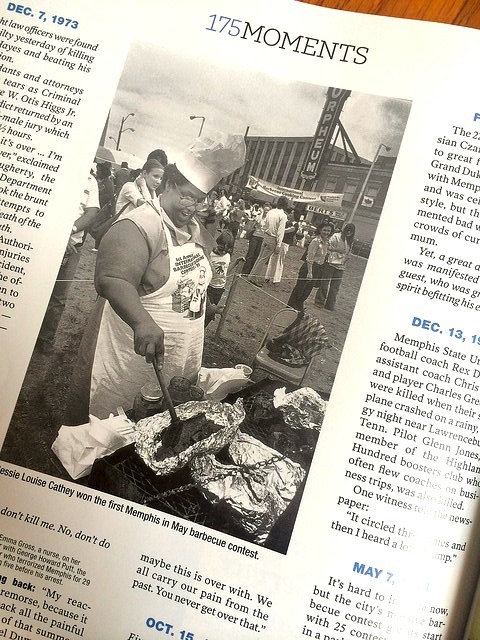 Oh my, how things have changed. There are no double-decker tents or team branded to-go cups to be found at the first Memphis In May, just one Bessie Louise Cathey with her table set up in front of the Orpheum. 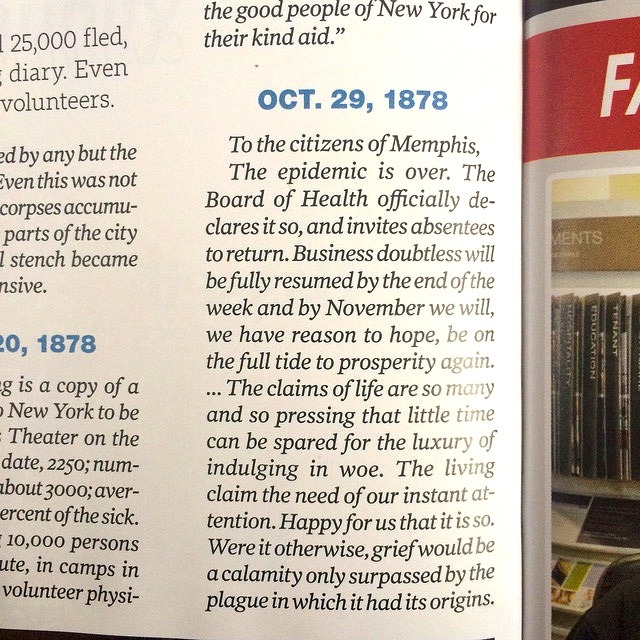 Inside 175 Moments, you'll find mayoral proclamations and editor's letters marking the end of wars and reacting to tragedies, but something about this notice that the yellow fever epidemic was over gave me - as we say on the internet - all the feels. 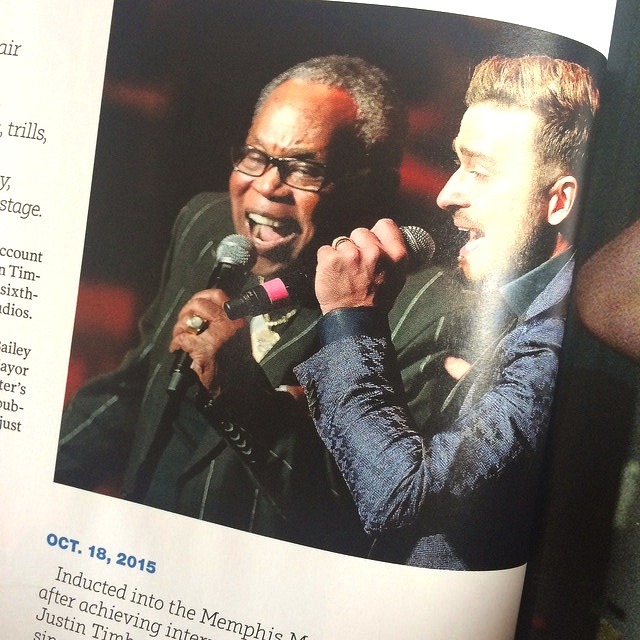 It might be the most recent moment in the magazine, but I was really happy about this one - mostly because I proclaimed it to be part of one of the Biggest Weekends In Memphis Ever last year. No mention of the Memphis Tigers football team beating Ole Miss on the same day, unfortunately. 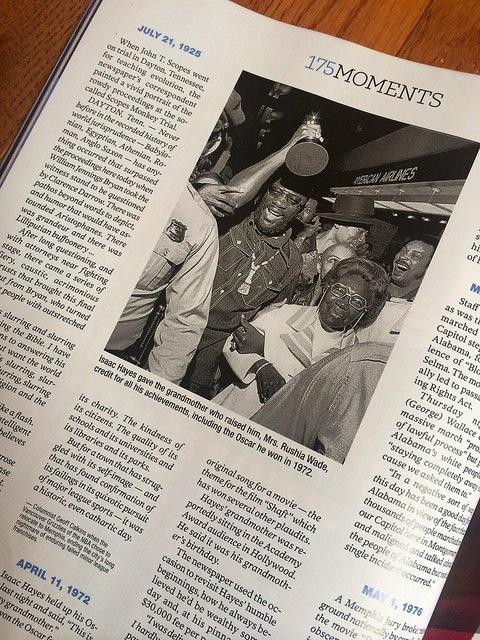 It was a victory for Isaac Hayes, for Memphis music, and apparently a lovely birthday present for Hayes' grandmother. This sweet picture of him and the woman who raised him secured this "moment" a spot in my top five. 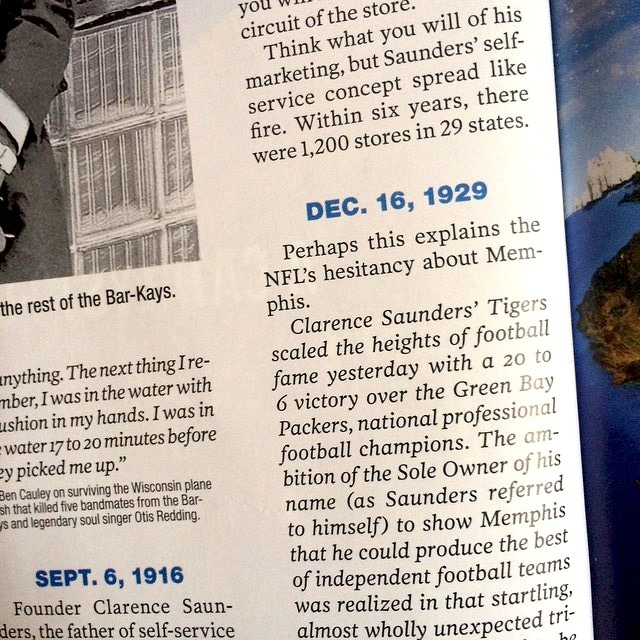 So this might not be the exact reason why we don't have pro football, but the account of Clarence Saunders' football team crushing the Packers was very grit 'n' grind for 1929.

- The time someone complained that there were too many horses hanging around on the streets downtown
- The day the Grizzlies announced they were moving here from Vancouver
- The day in 1948 that Memphis got television
- The time in 1940 that E.H. Crump was inducted as mayor, immediately resigned, then had a snowball fight at the train station

Above, I just took some quick snapshots of the physical magazine's pages so you could get an idea (and I didn't want to give away the whole articles) but like I said, it will be available starting Sunday.

The CA has also teamed up with Wiseacre for a special 175th anniversary commemorative beer called Men Not Machines. The label/poster art (by Memphis native Rachel Briggs) is cool as hell: 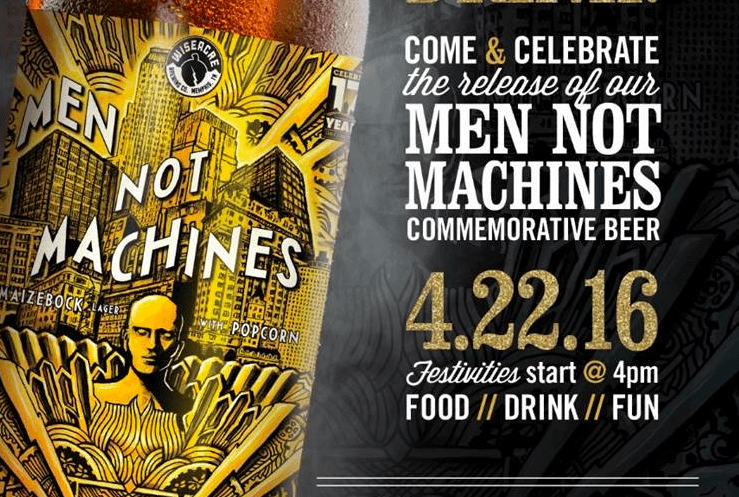 They're having a special release party for the beer on Friday, April 22 at Wiseacre, which just so happens to be the same day at the Broad Avenue Art Walk. It's free and open to the public, and they'll have fun giveaways. Read more here.

You can buy copies of the Commercial Appeal on Sunday, which will have 175 Moments inside it. Also, 175moments.com will be live Sunday with added content. After that, you can buy additional copies of 175 Moments beginning Monday at the CA (495 Union) as well as various retailers.