These Are The Tortas You're Looking For: Maciel's Tortas and Tacos

These Are The Tortas You're Looking For: Maciel's Tortas and Tacos

For a long time, downtowners (and folks who work in the downtown core) have wanted a simple, affordable taco joint. I'm happy to say that we have a contender*: an easy, tasty Mexican place that is decidedly the opposite of the high-concept or small plates menus currently saturating the restaurant scene in Memphis.

Maciel's Tortas and Tacos opened last week just south of Monroe and Main. By Thursday I saw a decent lunch crowd. After trying it…well, I expect a constant line out the door soon. They serve tacos, tortas (Mexcian sandwiches), salads, quesadillas, and more. 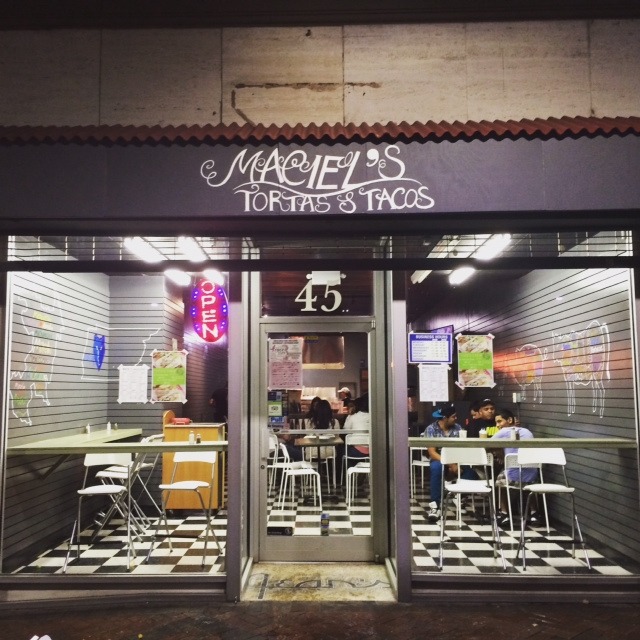 The small restaurant is tucked between Flight and a Family Dollar; the interior is casual and clean, with charming chalk-art-inspired paintings on the walls. You can order at the counter and sit at one of a few tables; while I was there, several folks also came in to pick up or make to-go orders. When I went for dinner, my friend and I sat at the counter so we could watch the magic.

The magic being, of course, the food, which is made to order in a small, open kitchen. It kind of looks like someone installed a restaurant-grade griddle and prep line inside of their (very clean) home kitchen. 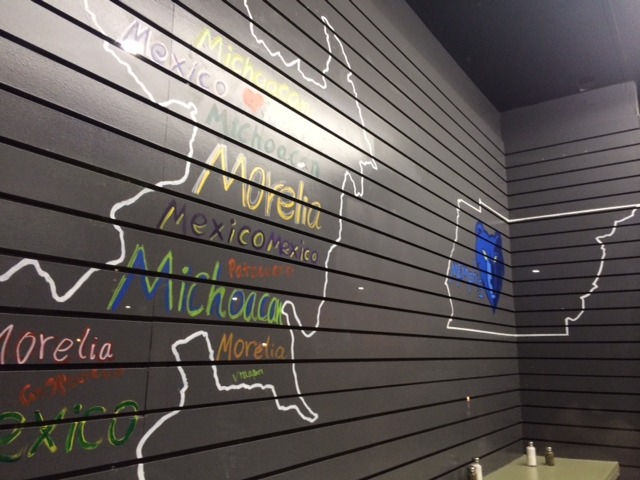 We ordered guacamole, three tacos, and the Cubana torta, which one of the chefs recommended. Right now, Maciel's doesn't have any alcohol licenses (they do have horchata and Jarritos) but it's on the way.

The food came out as it was ready - it was not quick, but not too slow - which was fine by us since we were observing the whole process. I'll happily chill for a while for food that is crazy fresh, plus the dance of the three chefs cooking and sounds and smells of meat sizzling kept me mesmerized as we waited. 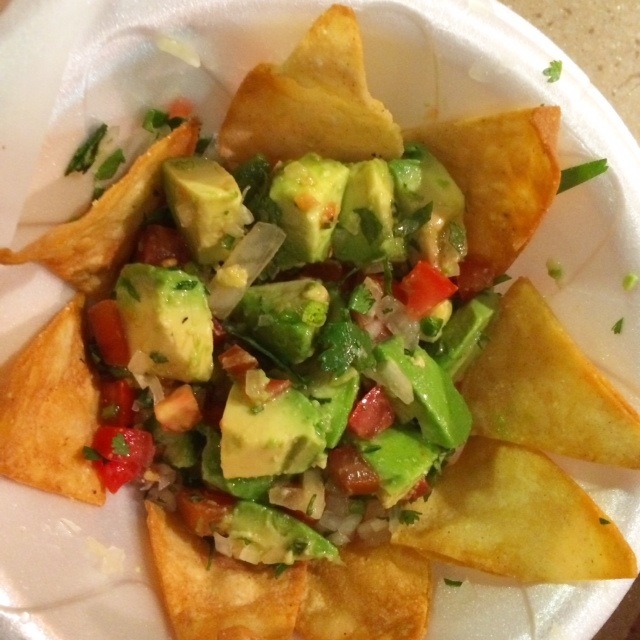 The guacamole is obviously chopped up to order. I could have used a few more chips, which were a little on the chewy side, but the guac itself was wonderful. 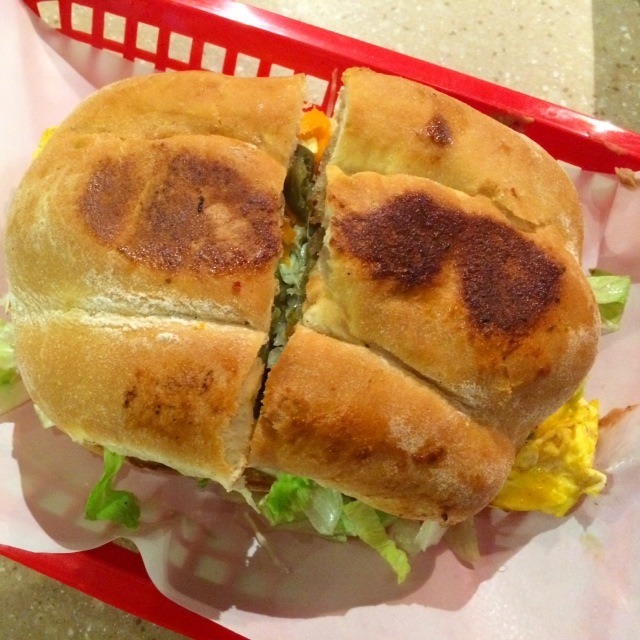 The Cubana Torta, which at $11.50 is the most expensive thing on the menu, came out in a one of those red plastic baskets, and it was monstrous. I'm not sure I've ever had a sandwich with so many ingredients. There was sliced ham, chorizo, and even bits of grilled chicken - which might have been the "milaneza", and a fried egg. A fried egg. 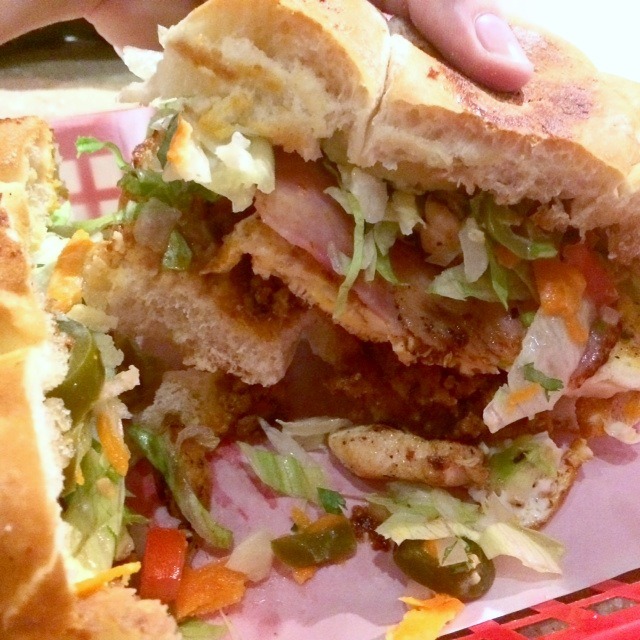 Shown with my hand for scale.

The sliced avocado, carrots, onions, jalapeños, lettuce, and peppers all sort of converged to create a slaw-like topping for the meats. According to the menu, there was also some form of cheese and mayo dressing the sandwich. I think we found a piece of pineapple, too. I'm not really sure. Whatever it was, it was working. Really working. This thing is flavorful, savory, and satisfying.

Let me just say one more thing about the Cubana torta before I am forced by my growling stomach to get up from my computer and drive directly to Maciel's to get another: I think this may be Memphis' new favorite hangover/post-marathon/I'm-starving-and-I-haven't-eaten-all-day food. It's memorable. 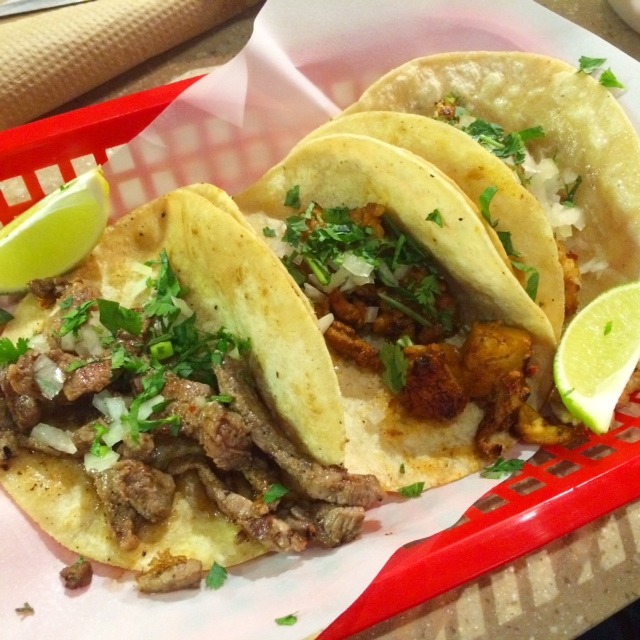 We also tried the tacos and went with the pollo, asada, and pastor. They're the traditional tacos, that is, with cilantro, chopped onions, no cheese, and served on a double corn tortilla.

They were all tasty, with the pastor - described on the menu as spicy pork, though it was tolerably spicy for a heat wimp like me - being our favorite. The pastor had some pineapple in it, and I liked that spicy plus sweet flavor. If for some reason you're not offered them, definitely ask for the mild, medium, and hot sauces they have - they really make the tacos.

I will be going back soon to order the fried tacos, which come with three tacos plus rice and beans ($7.25 and up). Maciel's also plans to have lunch specials every day. During their opening week, it was a torta and a soda for $8. 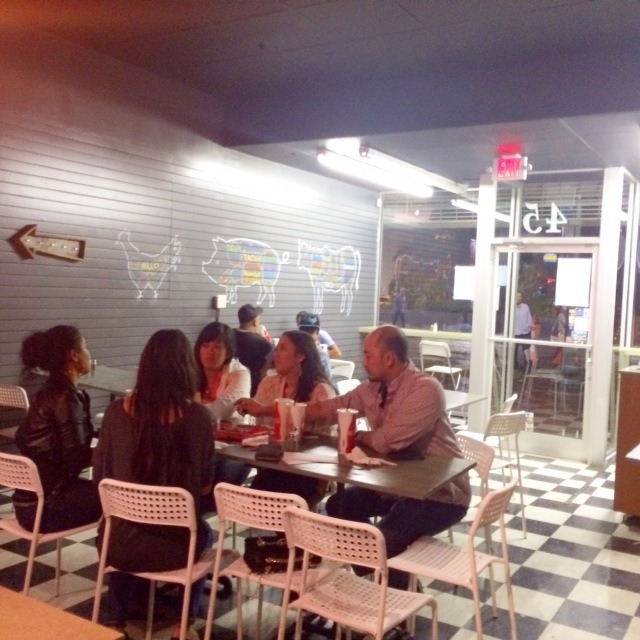 While we were there, we also saw a delicious-looking salad and some kind of bean dip. I'm also curious about the huaraches. OK, so basically I'll be working my way through the menu soon.

Maciel's is owned by Manuel Martinez, who throughout the evening was moving swiftly from the kitchen area to the dining area and back, cooking, plating and serving food along with the two others. During our brief interactions and answering our questions, I found his positive demeanor and enthusiasm to be infectious. I obviously don't know Manuel personally, but he seems like the type of individual who could turn your day around just with a brief interaction.

He told us that he named the place after his son, and that he'd been a little concerned to open such a restaurant in case there wasn't enough demand.

If he continues what he's doing, I don't think Manuel has anything to worry about.

*Ed. Note: I've heard good things about Sabrosura Mexican and Cuban Restaurant on Washington (which is a little far for a lunchtime walk from the Main and Union area) but haven't made it by yet.

I enjoyed the Tacos very much. Tushar

You will be mine, pastor torta!

Ate there this weekend and was very happy with it! The decor is simple but the food is amazing.

The prices are too damn high. Thats ridiculous, regardless of the quality of food. :)

This was the perfect description for this place! Food was simple, fresh, delicious and affordable! 4 stars for all that and for your well-written article which made me want to get back and work my way through the menu as well!

Gabe - I haven't tried the new taco place. Prices kinda reflect the neighborhood though. I'm sure this place is good, but authentic Mexican food can be had cheaper at Las Delicias. I usually go to the one on Park Ave.

It's true that Las Delicias tacos are $2 each and Maciel's are $3.25. I'll gladly pay the extra $1.25 for a little bit bigger taco with more meat, toppings, and flavor, but that's just me. I still love Las Delicias, though! I always get there Enchiladas Verdes and their guacamole is superior, in my opinion.