Ed. Note: Late this afternoon, I received word that Binghampton's arcade and gaming bar, the Rec Room, will have a big ol' party for Independence Day next weekend on July 3 and 4. I thought the Rec Room's dispatch spoke for itself, so here it is, followed by more info and my comments about the Rec Room. If you want to see the full guide to the Fourth of July in Memphis, click here.

There’s a reason they call us American, and not American’t.

We can do lots of things. These things we do are awesome.

In recognition of this, the following will happen on Friday, July 3 and Saturday July 4 at Rec Room, an awesome bar in perhaps the most American neighborhood of Memphis — Binghampton.

1. Grilling: We will cook meat directly on the coals of a hot, burning grill. You can eat said meat for a small fee.

2. Fireworks: In celebration of team USA’s impending victory over team China, we will not blow up anything this weekend. Instead we will periodically stream enormous displays of American-made gunpowder on our six giant screens inside the Rec Room all weekend.

3. Video Games: We have six of the largest screens in Memphis, and on these screens you can play video games - everything from Contra on Nintendo to Mortal Kombat on XBox One. With your friends. While drinking beer and taking shots of Jim Beam.

4. Yard Games: What is more American than throwing bean bags at holes cut through plywood? Maybe beer pong? Yes. We have both. We also have an Americanized version of Badminton involving shuttlecocks. That’s right. And bimini ring toss, table tennis, pop-a-shot basketball…I can keep going, but I won’t. Just come check it out.

5. Beer: Pitchers of craft beer named after tiny bombs and stuff Sam Adams himself couldn’t have dreamed up for $15. Industrial beer for $10/pitcher that’s great for beer pong.

7. Bathing suits: We invite you to wear your bathing suit. We might even get out the hose and kiddie pool. Cut-off jean shorts are also acceptable attire, whether or not they're worn ironically. 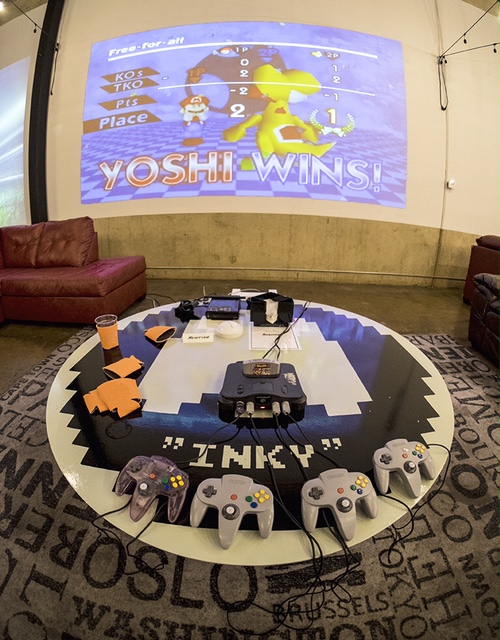 Photo provided by the Rec Room.

If you haven't been yet, the Rec Room is an arcade bar located in a former warehouse in Binghamton that opened this past spring. It's filled inside and out with old school video games, arcade games, and things like the table tennis, basketball shooting games, and cornhole mentioned above.

Keep in mind that since many of these games are old, their functionality can be hit-or-miss. There are enough options, though, that you probably won't mind that too much. There's a full bar stocked with local beer, plus a steady rotation of food trucks, so outside provisions aren't allowed. 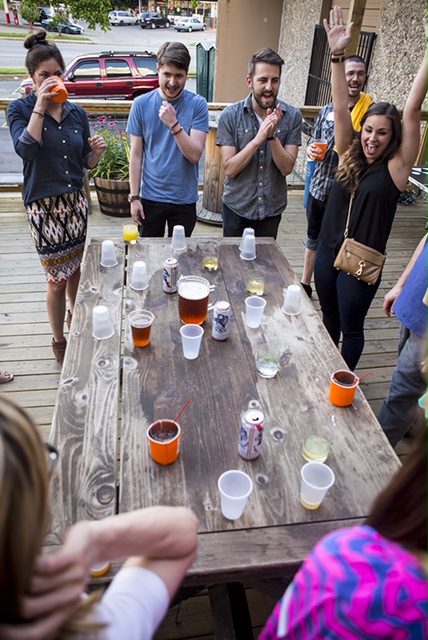 Photo provided by the Rec Room.

Also mentioned above, they have six projector screens, each once set up with couches and comfy chairs. The Rec Room calls these "living rooms" and while some of the screens will show sporting events, others are available for you and your friends to rent to play video games and hang out. You'll need to reserve your space ahead of time online. Living rooms are $10/hour Sunday through Thursday and $25/hour on Friday and Saturday. Yes, it's air-conditioned in there.

I'd follow Rec Room on Twitter and Facebook to keep up with specials, gaming tournaments, events, trivia with my podcast co-host Kevin Cerrito, and which food trucks will be providing that night's grub.

I went for the first time Saturday night with a large group of friends.  We all had a blast bc there were so many different options of things to do.