Memphis Made Brewing Company's Tap Room has been open since last fall, and while I've made several visits, I haven't written too much in detail about this great Cooper Young hangout. Until now. 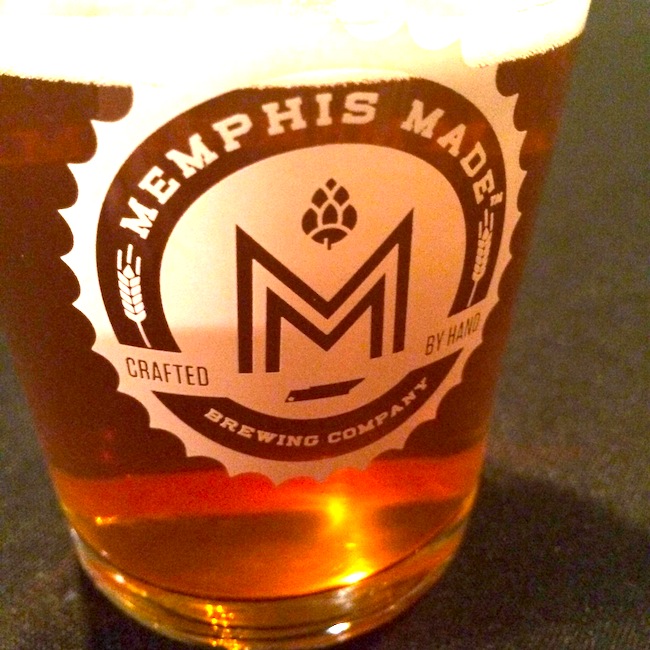 Memphis Made is a small production brewery in Midtown; co-owners Drew Barton and Andy Ashby have been brewing under the Memphis Made brand since 2013. They have one year-round beer, Lucid Kolsch, and a healthy selection of seasonal and rotating beers that you can buy at the tap room, or one of the many bars, restaurants, and growling filling stations that carry them. 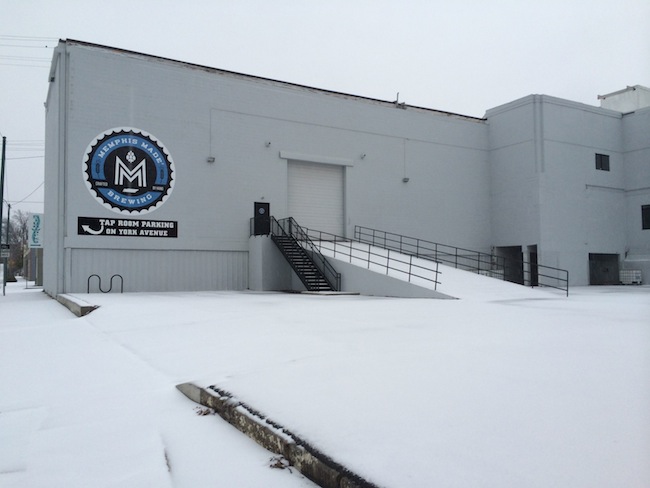 The tap room on a slightly colder day.

The tap room is in Cooper Young, just north of the train trestle and right next to the big red I Love Memphis mural. It's a large, white warehouse sort of building, and inside is a clearly a working brewery, with all manner of equipment and kegs stored on high shelves. 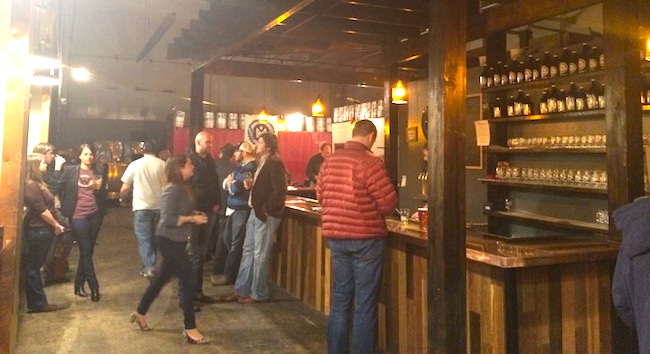 There's a bar with between three and seven beers on tap; you can get 10 ounce ($3) or 20 ounce ($6) beers to drink on the premises Fridays and Saturdays or fill up your growler. There's plenty of seating at tables, a few high tops and at the bar itself. I've seen couple of nail-biting games of giant Jenga go down in the tap room on occasion. 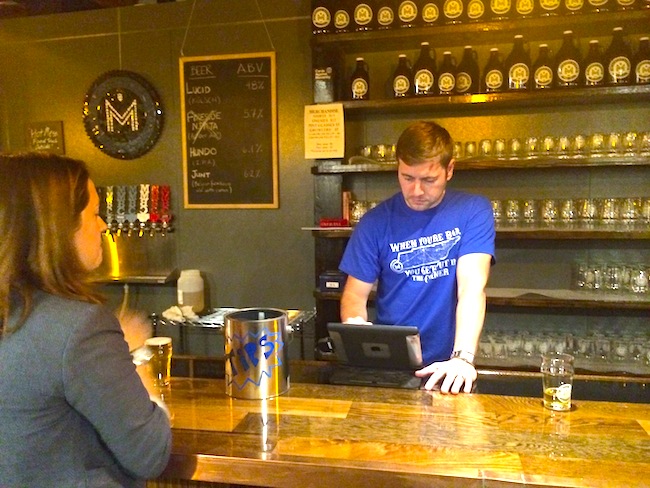 It's going to be warm (read: hot) inside the taproom this summer, but with the big bay door open, a few fans going, and a cold beer in your hand, you'll be OK. The thing I like about Memphis Made's tap room specifically is that if things get very crowded inside, folks can spill out down the ramp and into the lot next to the I Love Memphis mural and right outside the York Avenue entrance. They have live music sometimes, and it's a good place for a private event. 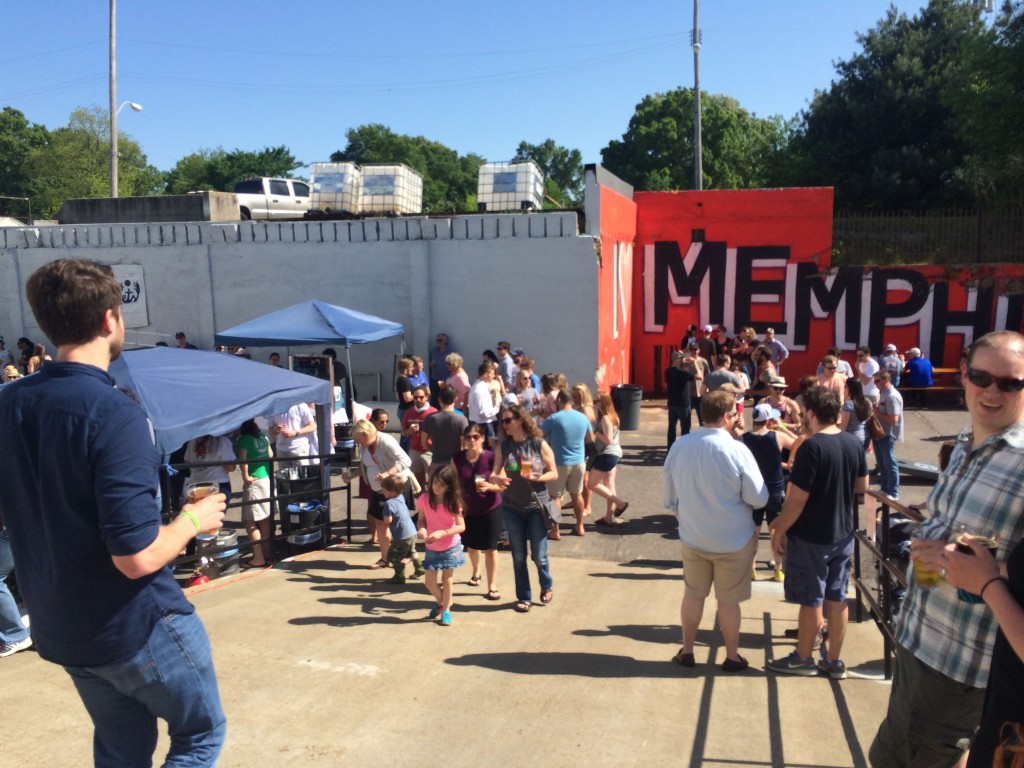 Outside Memphis Made during "Hopped" spring event back in April.

There is almost always a food truck parked outside on Friday and Saturday nights; very often it's Hot Mess Burritos and Food Geek, but they have a steady rotation. I've found it to be a good place to wander over to because I can usually count on seeing a few friends or neighbors there. Andy and Drew and their friends are some of the nicest people I've ever met (seriously) and I'm sure that helps the tap room feel like the welcoming neighborhood hangout that it's become. 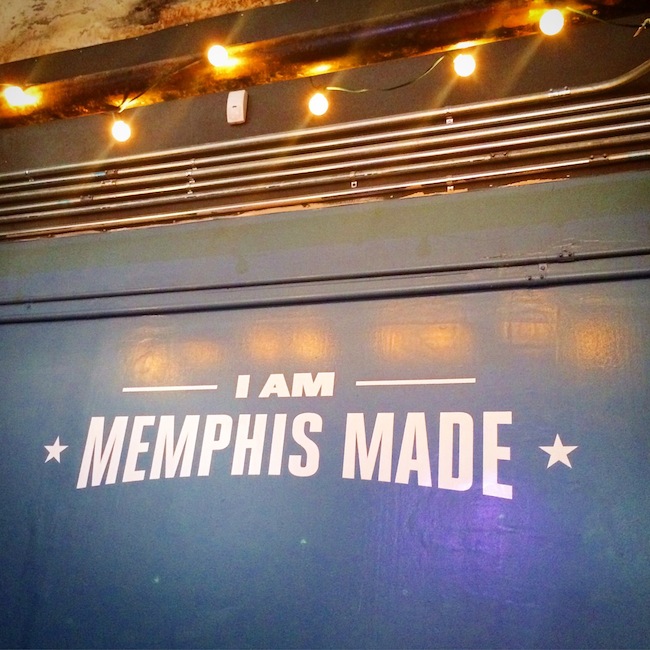 Let me talk about the beer for a bit. Memphis Made should get some kind of award for the enthusiasm with which they name their brews. A sampling: Fireside Ninja, Soulful Ginger, Plaid Attack, McFuggle, Junt, Business Time IPA, and, of course, the RockBone IPA. Do yourself a favor and read these descriptions. They'll give you a chuckle and make you thirsty all at the same time. 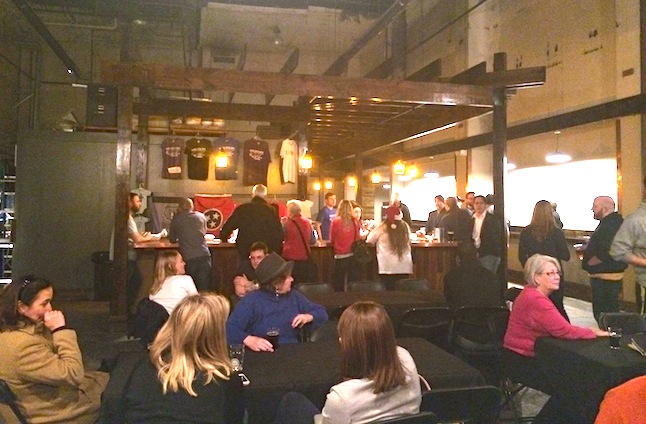 I know it's totally uncool these days, but I still love a ridiculously hoppy beer. For Memphis Made, that means the Waka Waka IPA. Folks love the Reverberation when it's available, made with locally-roasted coffee from Reverb Coffee Co. Andy and Drew make plenty of special brews exclusively for events, so if you're really into trying the limited edition stuff, follow them on social media. Important: many of these craft beers are going to be in the 5 - 6.2 percent ABV, so drink responsibly. 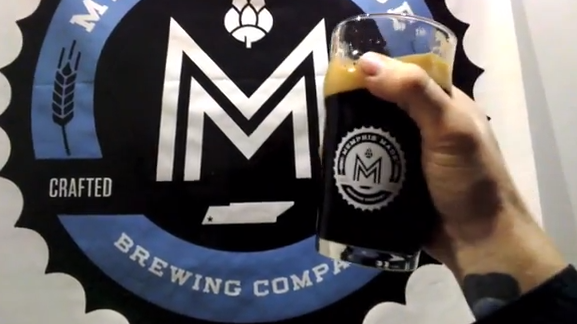 The tap room is open on Fridays from 4 p.m. to 9 p.m. and Saturdays from 1 p.m. to 9 p.m. They only give official tours on special occasions or if you ask really, really nicely when someone is available. There is some parking and an entrance on the York Avenue side (kind of behind Aldo's Pizza) or you can find nearby street parking. The huge ramp on the Cooper Street/mural side serves as a secondary entrance.

The space is ADA accessible via an elevator on the York Avenue side. Kids and families are welcome; in fact, you can pretty much expect a kid or two with their parents early on or during daytime special events. You must present ID and be 21 and up to drink, of course.

You can keep up with Memphis Made events on their Facebook, Twitter, and Instagram pages. I usually mention or include their events on this blog and the calendar as well.

If you want to hear more about Memphis Made and the craft beer scene in Memphis, you need to listen to the September 2014 episode of the I Love Memphis Podcast. Andy Ashby joins me, my co-host Kevin Cerrito, and local beer guru Taylor James for a very entertaining discussion. Click here to listen.

Side note: Memphis Made is brewing a special beer for the Cooper Young Festival 4-Miler on September 18, and they're holding a naming contest for the brew. To enter, just post your clever name to social media using the hashtag #4milerbrew. The deadline to enter is noon on June 25, 2015.