Zam Zamz Mediterranean Grill is Kind of a Miracle

Zam Zamz Mediterranean Grill is Kind of a Miracle 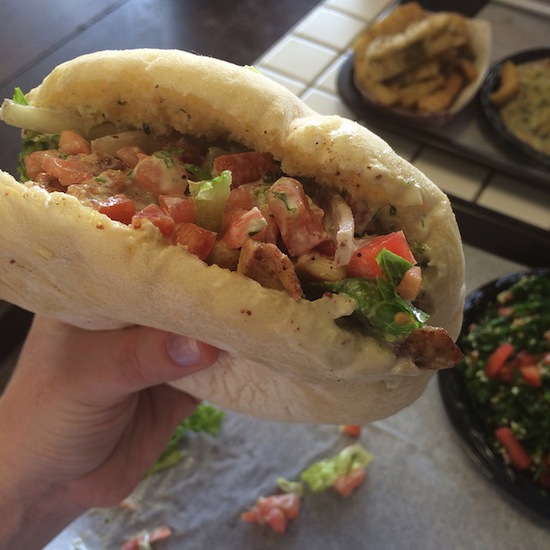 Why is it a miracle? First, it's unusual that a family-owned restaurant would be hidden amongst a Wingstop, Genghis Grill, Cheddar's, and an Olive Garden (the TGIFridays and Logan's Roadhouse are across the street). Second, the food is very tasty and authentic, most of it is healthy, and nearly everything on the menu is under $10. A few of the platters with kebobs and sides are about $15.

Finally, when I call Zam Zamz a miracle, I'm also referring to its name. "Zamzam" is the name of a well near Mecca in Saudi Arabia that's considered holy because it's never run out of water. So there's some trivia for you.

The restaurant's interior is clean and nice, but nothing fancy. There are plenty of tables, very appetizing photos of menu items (I know for a fact these are pictures of Zam Zams' actual food), and a counter where you place your order.

My boss Bob and I stopped by in late afternoon, between dinner and lunch, so for the most part, we had the place to ourselves.

Tabbouleh is a salad-like dish made of chopped parsely and mint, bulgar, tomatoes, and seasonings. It has strong, sort of bitter flavor that I liked - but I liked it even better when I put it in my chicken pita. I don't know if that's a blasphemous way to eat tabbouleh, but it worked for me.

The falafel was excellent.

This is the lamb pita. The portions were plentiful, and even though I was absolutely starving, I had to take part of my chicken pita home with me.

Baba ghanoush is an eggplant dip. At Zam Zamz they serve it with addicting pita crisps.

The food looks amazing! I can't wait to try it!

Had lunch today with friends at this place... Had Chicken Shawarma platter, Good taste & fast service.  Will recommend to everyone...especially for Baba ghanoush & Chicken Shawarama...