Last Friday, I went to the Crosstown neighborhood to meet up with Marco Pavé, an up-and-coming Memphis rapper, to talk about himself, his work, the Memphis rap/hip-hop scene, as well as Memphis in general.

Marco keeps the focus on the positive while not ignoring the issues Memphis faces. Most importantly, he got me excited about people like him who love Memphis and who are working to improve the city from the inside out. Marco is performing along with Chinese Connection Dub Embassy tomorrow night at The Hi-Tone at 9 p.m. and you should go. He's also part of the Memphis hip-hop delegation going to SXSW in March. 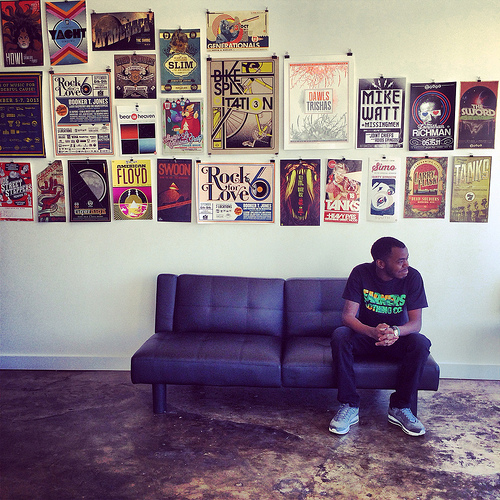 At Crosstown Arts. Special thanks to the folks there who let us use their space for interview and photos.

Tell me about yourself.
This is my neighborhood. I'm from Crosstown. Well, most people would consider it North Memphis. I'm North Memphis born and raised. I've been rapping for ten years, but professionally, one-and-a-half, going on two years now. My real name Tauheed Rahim II. It's my government name (laughs). It comes from my Islamic background. My parents are Muslim, and I was raised a Muslim child, and that influences a lot of my music because I saw two different sides [of life] growing up in North Memphis. I could go inside and maybe get in trouble for doing something bad because my dad always stayed on me. Or I could go outside and see crime. I wouldn't say it was great, but it really molded my future, because I could see both sides of the fence.

I went to elementary school at Vollintine. I went to middle school at Cypress right down the street. I went to high school at East High. I went to Southwest for a semester and a half, and then I was like, 'Music. I gotta do it.'

You say you've been rapping for 10 years, but have been professional for about two years. What does it mean to you to be a professional rapper, or, where's the line between amateur and pro?
For me, it was when I started doing real shows, opening for bigger artists like Skewby.  I've opened for Waka Flocka and Haystak and for MGK last summer. That really set the standard for me, because it let people know that this is the real thing. I started getting blog traffic, started Googling myself and there were images and press popping up.

I don't have a full album or mixtape; I haven't put out a project yet like that. I have singles on my Soundcloud; "Dividends" would be one. I just did a freestyle to "Devil is a Lie" and it was featured in the Memphis Flyer. I'm working on a new single with Nick Black from The Nick Black Band called "Trampolines" that's signed through my publishing company, Simply Grand Music. I have two more singles that they signed, "Fountain of Youth" and "Dividends". I have three singles with publishing deals that are gonna be released this year.

You got some news right before we met up today. Tell me.
Last night I got the email from DJ Space Age about performing at SXSW. It's official - Marco Pavé will be performing at SXSW along with others from Memphis! I'm don't know who all is gonna go, but we're gonna get a bus and go down there and put Memphis on the map. We're shooting a movie (laughs). From the time we leave for Austin, we're just gonna be filming everything.

How much has Memphis music - whether it's the blues, or rap and hip hop, or anything - influenced you and your music.
Growing up my dad listened to Earth, Wind, and Fire and The Barkays, what we'd now call old school music. But then we used to sneak and listen to like Three 6 Mafia, all their albums. It just gave you so much energy! You could still see that they were influenced by the older generations, too, with the music and all, because it was so well put together. So I was influenced by the older school and the mid-90s crowd like Three 6 Mafia, Project Pat, Yo Gotti when he first came out. Then you fast forward to 2013 when Gotti put out the I AM album…you can hear the soulfulness in the album. From start to finish, that's one of the best put together albums of all time, honestly. Because you can see the influence of actual music.

That's a lot of Memphis artists.
Yes, of course. But for artists outside of Memphis who really inspired me…Kanye West. When he dropped The College Dropout, I said 'I'm gonna rap too. I gotta do it' because it really changed how people see rappers. They had the term "backpack rapper" and now that term is really irrelevant because all the "backpack rappers" are really the stars: Kendrick Lamar, Drake, the list goes on.

What's a backpack rapper?
A backpack rapper is one that doesn't rap about the normal bling-bling, you know, the things most people associate with rap--gangster rap, mostly. Someone like Lupe, Kanye, Kendrick, that have more substance with their rhymes. They call them a backpack rapper because there's this idea that they're studying, that they have book-smarts.

If people want to listen to Memphis rap artists, who do you recommend?
To start, the national artists that I listen to: Kendrick Lamar, Drake, all of Rick Ross' old albums. A lot of people didn't like Yeezus [Kanye West's most recent album] but the substance is there. It's the same story lines all the way from College Dropout to Yeezus and in-between.

As far as the Memphis scene, artists like Preauxx, he just dropped his mixtape "Die Winning", and a young up-and-coming group called Soul; they just dropped their EP called "The Itis". You also got Virghost. He just won The Next Big Thing Contest for K97 and he opened up for French Montana at the Dub Show. Also Sincere Da Misfit.

What are some Memphis venues where you've performed, or where people can catch shows in general? (TLDR: scroll down to the bottom of the post for a concise list of upcoming shows.)
Last year I performed at the old Hi-Tone on Poplar. It was the last hip-hop show ever at the old Hi-Tone. It was me, Skewby, and Preauxx, and that was so epic for me because it was the last hip hop show. Once Hi-Tone moved to right down the street, I haven't had a chance to perform yet, but I am really soon on February 28. Then I'm performing at Hi-Tone with the Chinese Dub Connection Embassy, and Tyler a.k.a. DooZra - he's in like ten bands.

Also Minglewood Hall, we have a lot of shows there. On April 11 I'm opening there for Haystak. Also Newby's. My production crew Crop Circle Productions with Jody Land and ENT do a lot of free shows…We did a show on the 15th at Newby's and they made a [big investment] in the production of a free show. I mean, it was free--they let everybody in.

Another free thing we do, HypeLife, which I'm a part of, is every Thursday night at Brinson's at 341 Madison. We do The Melting Pot. It's an open mic night where new artists can come in and perform. Before 9 p.m., it's free, and after 9 p.m, it's $5.

In May at Purple Haze for the Beale Street Music Festival, Jody Land, ENT, and Crop Circle are sponsoring free after parties. I'll be performing at that at Purple Haze. There will be all kind of tourists coming through; it's gonna be crazy. On May 9-12 I'm performing for BristerFest, and that's gonna be at The Sanctuary on Cooper Stree. In September we'll  have MEMFest, the Memphis Electronic Music Festival. We had the first one last year at the Levitt Shell, we had like 2,000 people in 2 days to come out.

Ed Note: During our interview, Marco and I also talked about the changes in the Crosstown neighborhood. He was insistent that as long as those organizing redevelopment efforts make efforts to reach out (personally, even) to people in the neighborhood, that the longtime residents will take ownership of the new things happening there, especially the Sears Crosstown project. He has a sense of personal responbility for his neighborhood that I found inspiring.

While we were in the neighborhood, he took me next door to Storybooth, a youth arts and writing program. Last year, Marco found out about Storybooth and hosted a benefit show, Books on Beale, to help get the program up and running. He explained that many of the shows he's participated in are benefits for Memphis organizations like the Mid-South Food Bank, St. Jude, or other non-profits.

Where to see Marco (and lots of other Memphis musicians) this year:
February 28: with Chinese Dub Connection Embassy and DooZra at The Hi-Tone ($10 cover, $8 if you bring a canned good for the Mid-South Food Bank)
April 11: opening for Haystak at Minglewood Hall
May 2 - 4: performing at Beale Street Music Fest after parties at Purple Haze
May 9 - 12: performing at Brister Fest at The Sanctuary ( )
September: performing at MEMFest Memphis Electronic Music Fest at Levitt Shell
Every Thursday: part of HypeLife's The Melting Pot open mic night at Brinson's

What do you think about this type of long read interview with a Memphian? Let me know your thoughts, if I should do more posts like this from time to time, or if you prefer the shorter reads only. - HW

I love reading more extensive interviews and would love to see more in the future!

Marco Pave' is a great artist! Puts all his heart and soul into the music and the journey. #HYPELIFE

Great Article! I've Been Following Marco Pavé Since He First Performed At The First Music Megafest Hosted By Myself And Others. He Was 17 Then, An He Continues To Inspire Me With His Works And Efforts To Be A Better Person, Artist, And Example. Nothing Wrong With This Post. When They're Interesting, We Love To READ ON!

Hello Holly, My name is David Mosley aka "Thugmo" a member of the othe group "3MK . My group and I saw your blog and wanted to reach out to you. Our music is pop/hip-hop that doesn't cater to a specific demographic of people. We make make fun clean music that's for everyone. You can go to YouTube and type in "3MK Movement " to hear some of our music that you will love ..Trust me! So if you may you can contact us either by phone or via email at the aforementioned contact information listed below. We basically want to know what do we have to do or perhaps what are the steps to get you on board to be a blogger for us. Well we look forward to speaking to you as time permits. Thank you for your time...and have an awesome day.. #ITSNOTMUSICITSAMOVEMENT David E Mosley (901)600-5088 [email protected] Kevin Bowie (901)406-9233 [email protected]