Holly and I stopped by last week to give it a try. 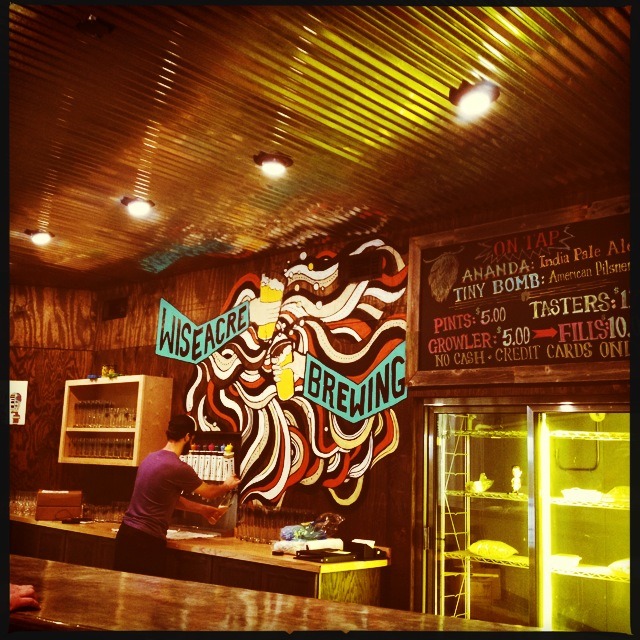 Kerry: Wiseacre's new taproom opened a few weeks ago, but judging by the crowd there at 4:30 p.m. on a Thursday afternoon, it's going to become a local favroite. I was surprised to see almost all of the seats taken by 5:30 p.m. Granted, that was only inside - they hadn't put any tables or chairs outside yet.

Holly: When I walked in, Kerry was already sitting at one of few empty high-top tables with a Pilsner. Folks were standing up at the long bar, and I squeezed in to order a pint.

Their row of colorful taps was a bit of a tease, since there were just two beers available, the Tiny Bomb American Pilsner and the Ananda IPA; I tried the latter. They also offered tasters and growlers.

Kerry: I agree on the huge row of taps being a bit of a tease, but it's promising for the future. The bar is credit card only (a first for Memphis, I think) - they don't accept any cash, at all, ever.

I tried the Pilsner, having had the IPA earlier in the week. It was good - smooth, but a little more advanced than Ghost River, which I liked.

Holly: I fully endorse the IPA if you are an IPA sort of person, which I am. It had enough of a hoppy bite to keep the taste interesting without being overwhelming. The citrus flavor made for good summer refreshment.

All the beer is brewed onsite, and we could see the shiny brewery contraptions through a glass wall, which added to the cool, industrial feel of the taproom. I'm looking forward to getting a closer look at the behind-the-scenes part (the website says that tours are coming soon). 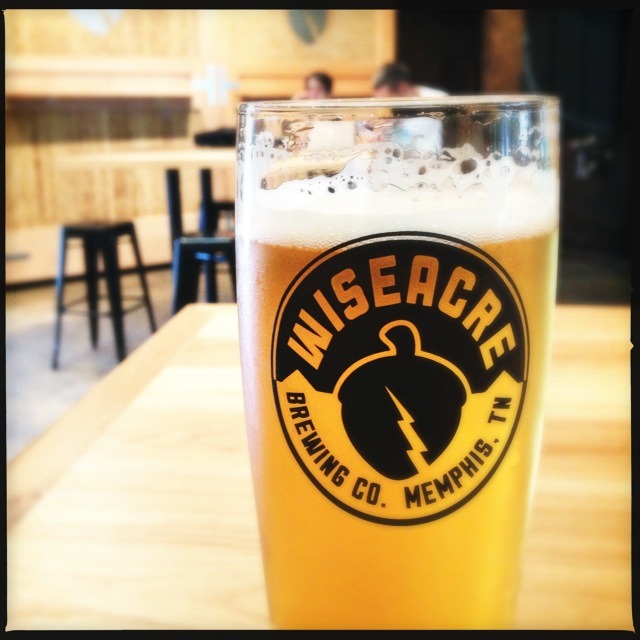 Kerry: Overall, though, I was impressed with the tap room. It's a great space, it's got a killer patio, and the beer is good. There's enough room out back for a food truck to park, which is something they've been doing on the weekends.

Parking is located around back (and there's a ton of it), so don't get discouraged if the building looks a little closed from the outside.

The Wiseacre Taproom is open Thursday and Friday evenings from 4 p.m. until 8 p.m. and on Saturdays from 1 p.m. until 8 p.m. There's no smoking, so I assume it's legally all ages, but it's a taproom, so let's just assume that it's 21 and up.

We went last Friday and it was packed by 5:00! Love the patio.

Too bad for them they don't accept cash.