If the concept of a live burger sounds a little weird, take comfort in the fact that this version, from Balewa's Vegan Gourmet, is completely meat-free.

"Live" just means that thevegan burger patty is full of plant enzymes which are still living because the burger isn't cooked. 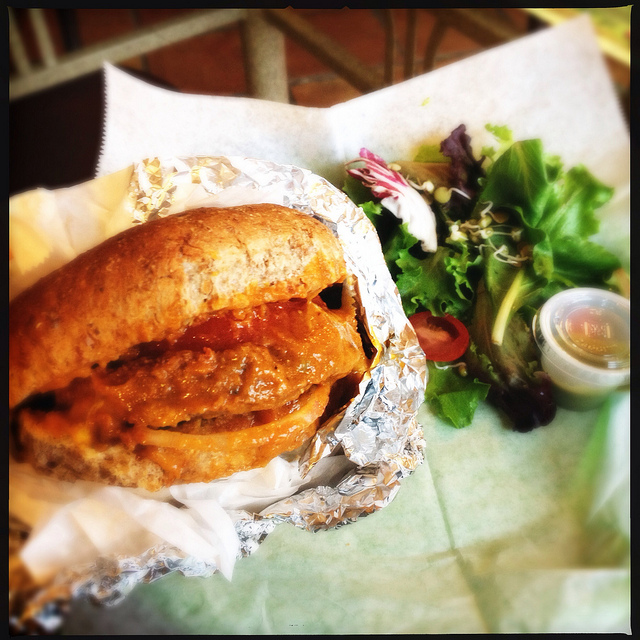 If you're an omnivore, though, you're probably wondering how it compares to a real beef burger. The truth is, it's not better or worse - it's just different.

The texture is a little paste-y, sort of like mashed-up beans. It's savory and earthy, and it's got just a little bit of spice. It's served warm and drenched in tangy organge homemade sauced on a big, fluffy whole wheat Ezekiel bun. I had never had Ezekiel bread prior to my trip to Balewa's, and I was amazed at how dense and chewy something that healthy could be.

The live burger is comes with a small mixed greens salad.

If you're feeling adventurous, try the key lime pie. Like the burger, it's also raw and vegan. It's a little runnier than regular key lime pie, and the texture is different, but the lime filling is bitingly tart and the avocados that are used to thicken it add a little bit of creamy sweetness. I have no idea what the crust was made of, but it was gingery and chewy. I would definitely eat it again.

Balewa's Vegan Gourmet has grown from a counter in Sean's Cafe on Union and Belvedere into it's new, full-sized location in the old Edge Coffee House space at the corner of Watkins and Overton Park. The entire menu is vegan. If you're an omnivore going for the first time, start with the items at the left side of the menu (mostly sandwiches and burgers), and as you feel more adventurous, move to the right.