Kooky Canuck is throwing an early New Year's party for everyone who has to work to make sure the rest of us have a good time on the 31st. If you're a server, bartender, cook, busperson or other service industry type, bring your pay stub, work ID, uniform or nametag and get into the party free. They'll have $3 you-call-its, a champagne toast, party favors and music from DJ Mark Anderson.

For those hard partiers that aren't allowed to stay up until midnight (aka, children), CMOM is hosting their annual New Year's at Noon party on Saturday, December 29th. Mother Goose and her friends will be on hand to ring in the new year with a parade through the museum, a goodie toss and a 12 p.m. balloon drop.

Join 60,000 football fans in Midtown for the annual AutoZone Liberty Bowl. This year, Iowa State Cyclones will take on Tulsa's Golden Hurricane in a meeting of two great football teams (that also happen to be named after weather events). Make a weekend of it - there are tons of events (like a parade) happening around the bowl game.

The Junior League knows a thing or two about fancy throwdowns, and their New Year's Eve party at the Pink Palace should be one of their best. The 1920s-themed party will have food, drinks, midnight snacks, live music, an auction and and an open bar that's flowing with all of the strength allowed by the 21st amendment.

Folk rocker Todd Snider is playing an all-ages New Year's Eve show with compatriots Cory Branan and Will Kimbrough. Expect tons of good stories, some low-key music and a good time. If you want to go crazy after, you'll already be on Beale.

On New Year's Eve, Beale Street becomes the local version of Times Square. The city's biggest NYE party starts at 7 p.m. and includes live music, fireworks and a guitar drop at Hard Rock Cafe. If mass revelry is your thing, this is the place to be. If not leaving the house is your thing, you can watch it live on WKNO. 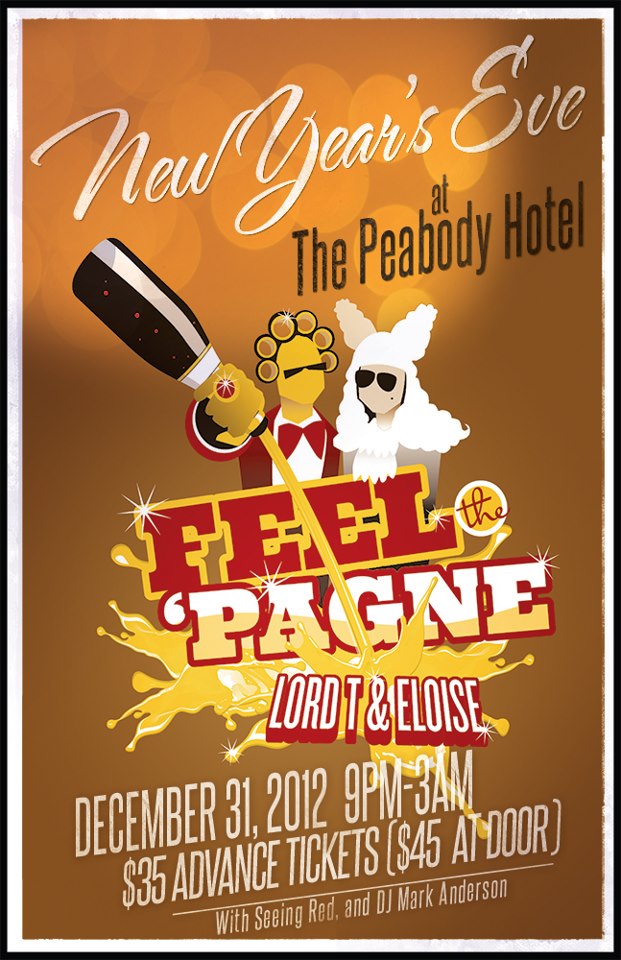 The Peabody always goes all out for New Year's Eve, and this year is no exception. On the 31st, they'll have a massive party with music from Lord T. and Eloise and DJ Mark Anderson. If you spring for the VIP lounge tickets ($150), you'll have access to a buffet and unlimited champagne and Stella Artois.

Support a local music documentary ("Meanwhile in Memphis") and get a ticket to see Star and Micey and Kait Lawson play a NYE concert at Le Chardonnay. In addition to good music, they'll have a champagne toast and midnight buffet.

Ring in the new year at the Hi-Tone (for the last time) with the Dirty Streets, Heavy Eyes and Electric Gringo Orchestra. Cover is a measly $5, the show is 18 and up, the beer will be cold and the music will be great.

Just like last year, Celtic Crossing's New Year's Masqurade party will benefit the Humane Society of Memphis and Shelby County. They'll have live music from DJ Tree, a champagne toast, and plenty of masks if you forget to bring your own. You can get in and get standard bar service for $5, but for $40 per couple, you can get a reserved table, bottle of champagne and an appetizer. For $45 per person, you get a reserved table, champagne and a three-course dinner.

New Year's Eve is the only night when Hog and Hominy takes reservations. The $75 cover includes keg beer (no idea what kind), a champagne toast, and a 1 a.m. breakfast buffet. They'll also have a DJ, photo booth, party favors and all kinds of other shenanigans.

Richard James shows are fun. The P&H is fun (and huge). Bring your own bottle of champagne, or just drop the $3 for the Champagne of Beers and spend the last night of 2012 at a rock'n'roll party.

If you know of any NYE events that aren't on this list, please leave them in the comments and I'll add them.

So how is Mark Anderson going to dj the Peabody and Kookies? oops?

The party at Kooky's is on the 27th and the one at the Peabody on the 31st.

Hi Kerry, We just posted our event on facebook for Blind Bear.  Wondered if you could add to list?  Cover $13, starts at 8pm, DJ BCON & MLW start at 9pm, pool table pulled back to allow for dance floor, $20 bottle of  Yellow Tail Bubbly.  Reservations made on www.blindbearmemphis.com reservations tab.  If you are able to we thank you very much!  Happy New Year!!

Anyone know of any good Vegetarian options for NYE? So far I haven't seen any vegetarian friendly menus for NYE dinners.