I wasn't sure what I was going to order when I stopped at Pho Saigon for lunch today. It was probably going to be pho, because at least half of my meals lately are. And then, I saw this diagram sitting on my table: 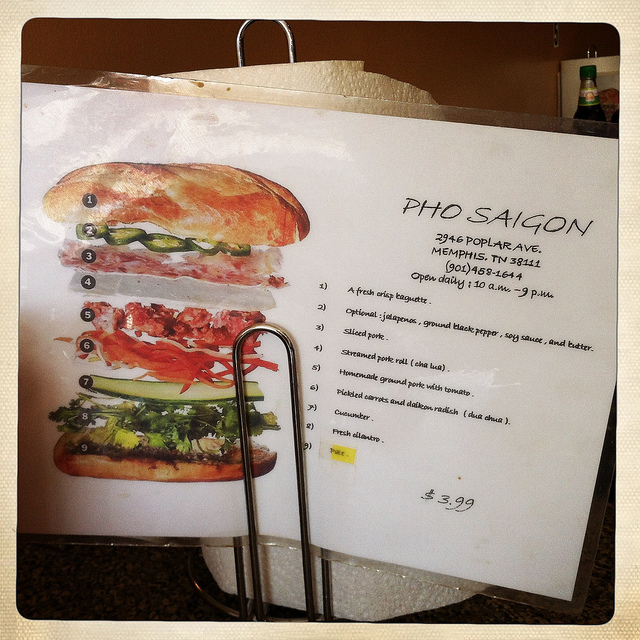 Where some restaurants just have little laminated postcards mentioning the specials, Pho Saigon has a complete, eight and a half by eleven diagram of their banh mi sandwich. It had four different kinds of pork on it and was less than five dollars, so I ordered it.

In an age where everything seems to be photoshopped and airbrushed to perfection, I was genuinely and pleasantly surprised when my banh mi came out looking exactly like the picture. 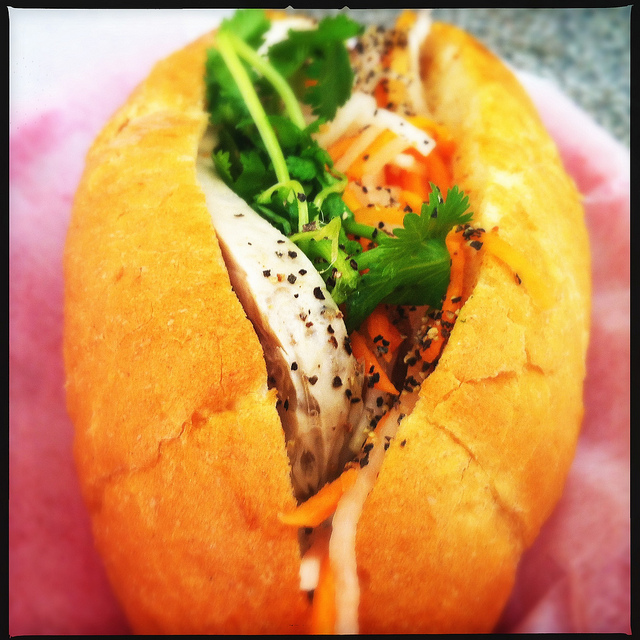 Even though the sandwich was halved, there was so much stuff on it that my first attempt at biting it resulted in a mouth full of deliciously buttery crusty French bread (and nothing else). Subsequent bites were more complete, but as I ate, I was conflicted.

I liked it. At least, I'm pretty sure I liked it. It was super fresh, and it had a nice sharp, almost citrusy, taste (a combination of black pepper, soy sauce and cilantro). The meats were all very different, and each added its own unique flavor to every bite. However - and I say this as someone who loves pork -  four different varieties is a lot for one sandwich. It was like all of Cochon between two pieces of bread.

There is this, though: Pho Saigon's bahn mi is probably the best, most-filling sandwich you can find in Memphis for four bucks. I took half of mine home, too, so that's like two large snacks.

The lamiated photo of this sandwich caught my friend's eye on our second trip to Pho Saigon. I ordered my usual sour soup off of the specialty part of the menu, he ordered a few more "munchy" type things. Once we got in the car, ready to leave with our food, he broke open the sandwich and took a bite, sat and chewed for a couple of seconds, swallowed and then looked at me with an almost blank stare of disbelief. "Dude, take a bite.." As I crunched into the sandwich and sat back in my seat I was in awe. The sandwich was so pleasing to the palate, that I too, had not known what just hit me. Still to this day, I can not describe that sandwich. If you are in the mood for something that will taste amazing, bring on a good mood, and truly satisfy your hunger, show up at Pho Saigon and ask for a Sandwich (it's the only one they have). Inexpensive, Indescribably deicious. Since that day, every visit I make to Pho Saigon includes a sandwich no matter what I order. Yes, you must now try it.