Give Venezuelan food a try at Arepa and Salsa, Memphis' newest (only?) Venezuelan restaurant. 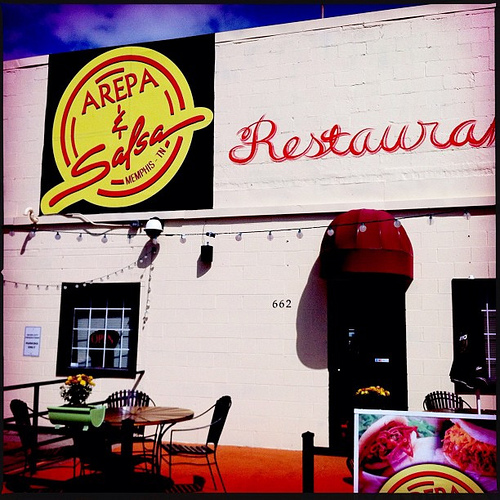 Before lunch today, I had never had Venezuelan food. Based on my very limited (read: Wikipedia) research I was expecting something approximating Mexican food, but with more sandwiches. That is, at it's core, what an arepa is. It's a cornmeal (or sometimes flour) patty slit like a pita and stuffed with meats, cheese and toppings.

We started our lunch with the UFOs from the appetizer menu. They're billed as mini-arepas with sour cream for dipping. 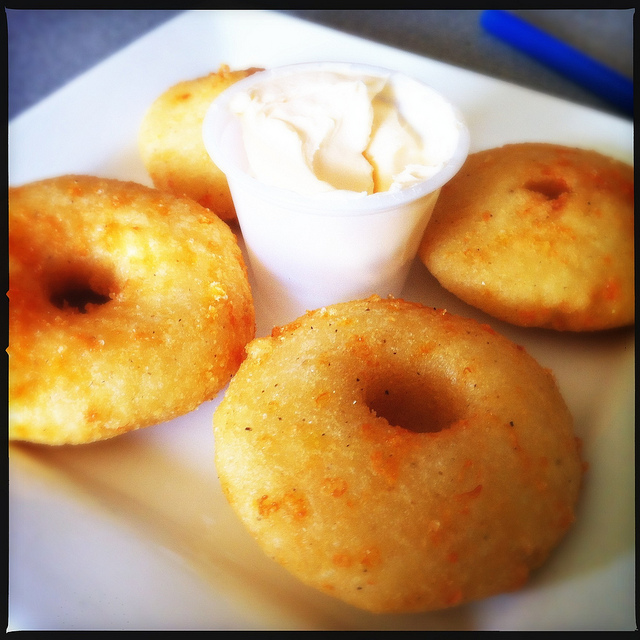 They're cute, and they taste like delicious cheesy cornbread mini-donuts.

For lunch, I had the chicken salad arepa. The arepa was stuffed with a Venezuelan take on chicken salad that was good, but not quite what I was expecting. It had a slightly sweet, coleslaw-ish tang, and came with chopped peppers, peas, shredded chicken and apples. I think I may have tasted a potato in there, but I'm not certain. 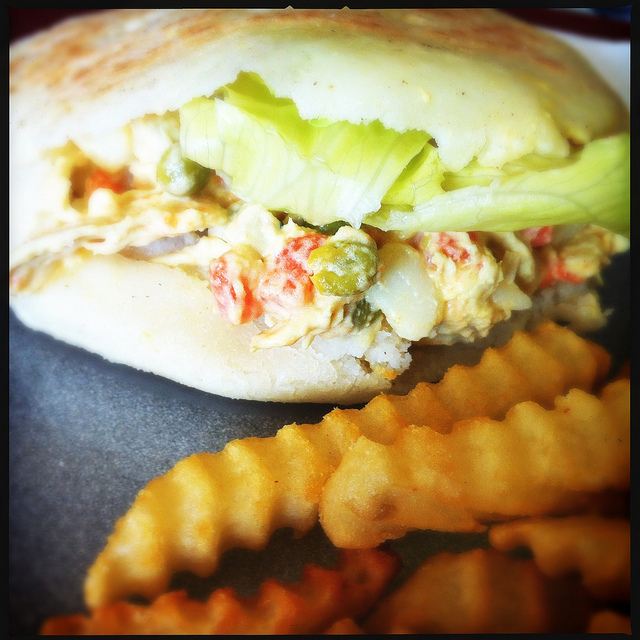 Next time, though, I'm going to follow my friend John's example and get one of the fried plantain sandwiches. It came with shredded pork, lettuce, tomatoes and the same slaw that my arepa had sandwiched hoagie-style between two fried plantains. 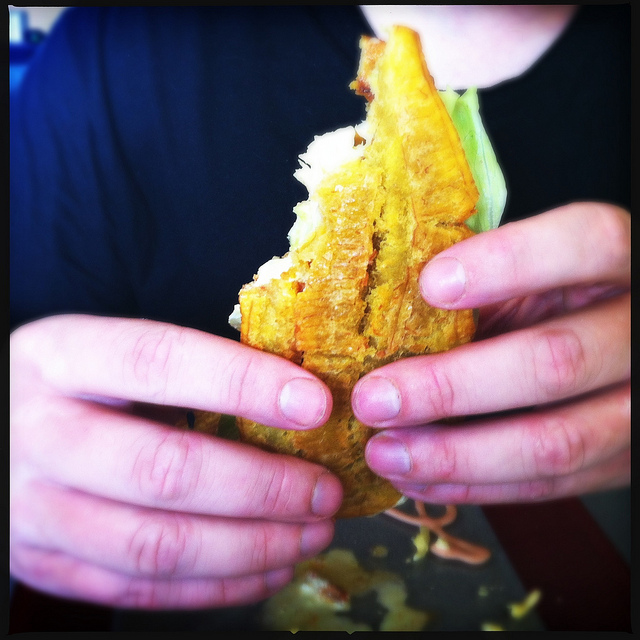 For those who remember Burly's (the buildings former tenant), the space looks totally different than it did when it was a bright red burger joint. The outside of the building is now gleaming white with a cute little patio, and the inside has been classed up a little bit so that it feels more like a casual restaurant than a diner.

The food at Arepa and Salsa is inexpensive - most of the dishes come in under $10. They're open for lunch and dinner, and when I was there, the service was friendly and efficient. As a bonus, their Facebook page says that they're offering salsa lessons in the restaurant on Fridays so that you can learn some sweet moves.

Try the beef/cheddar arepa next time. I asked the lady to sub in the 'salty mexican cheese' (what it says on the menu, I swear) and add the cilantro cream sauce. Pure heaven.

What?!?!?!? I just moved out of Memphis back to FL and I was always saying "There should be a Venezuelan place around here!! Everybody thinks us Venezuelans (I am Venezuelan) eat the same as Mexicans!! I'll show them!" so I always made arepas for any guest at my place AND NOW YOU OPEN?!?!?!? Good luck! I really hope it goes great and spread the Venezuelan's delicious food. PS: Make empanadas de pabellon, I bet they'll love it.

I went for the first time Friday at lunch...and went back with friends on Saturday! LOVED it! My favorites are the Pertil, the pork arepa, and the Naked arepas (an appetizer). Arepas are messy but worth it. I tried eating mine with a knife & fork and it just doesn't taste the same! BTW, they have taken the chicken salad arepa off the menu.