Reader Shane suggested that I give Emilio's Grocery on Getwell a try, so I stopped in for lunch. 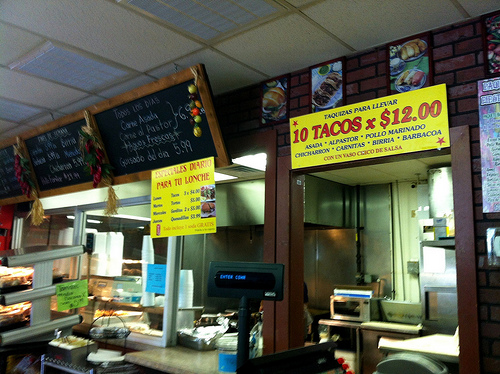 As soon as I walked in, I was sold. Emilio's is a small grocery store that carries Hispanic staples and has a hot food counter in the back. The menu is fairly basic - tacos, tortas, quesadillas, burritos. They've got daily lunch specials, and I was barely able to stop myself from ordering the 12 tacos for $10.

I decided to go with two tacos - one chicken and one asada.

Normally, when you order a taco at a taqueria, there's some kind of meat topped with shredded cilantro and diced white onion on a corn tortilla. Simple, but good. Emilio's tacos, though, were like regular tacos that had levelled up.

The chicken taco had huge chunks of spicy marinated chicken (I think it was in a tomatillo-based sauce). The asada had tender slices of beef that had been cooked with bell peppers. The tortillas were small, but they were thick and sturdy.

I picked up a canned iced tea from the cooler (they also have a ton of Mexican and American sodas), and my total bill came out to $4.50.

As a bonus, they sell their prepared meats by the pound, there are tables if you want to eat in the store, and the staff is small, but very friendly.

Please update your review of Emilio's, they've expanded their space and have a whole restaurant/dining area, and they have literally the BEST carne asada in the city! Worth an update!!!!!!

Sounds awesome! Can't wait to get back there and check it out!