Before the Game, Try Dinner at Bleu

Before the Game, Try Dinner at Bleu

Maybe it's its location attached to the Westin Hotel or it's fusion menu and trendy lounge, but Bleu seems more Manhattan than Memphis.

The space operated for years as a high-end seafood restaurant called Sole. Last October, the hotel hired Chef Robert Nam Cirillo and reopened the restaurant as Bleu, a sleek, polished restaurant and lounge. The menu is still heavy on the seafood, but the dishes are influenced by Chef Cirillo's Korean heritage and first generation Irish and Italian adoptive parents.

When I stopped by the restaurant on a non-Grizzlies game night, we had our pick of tables in the sleek blue and dark wood dining room. Before FedExForum events, though, Bleu's lounge and patio are packed with people having a drink before the game.

To start, I almost went with the charcuterie plate, but our friendly waitress suggested either the spicy lobster tempura or the lobster bisque ($6), which I ordered. It was creamy and bright orange, and tasted like it had tons of lobster in it, even though my bowl didn't have any chunks of meat. 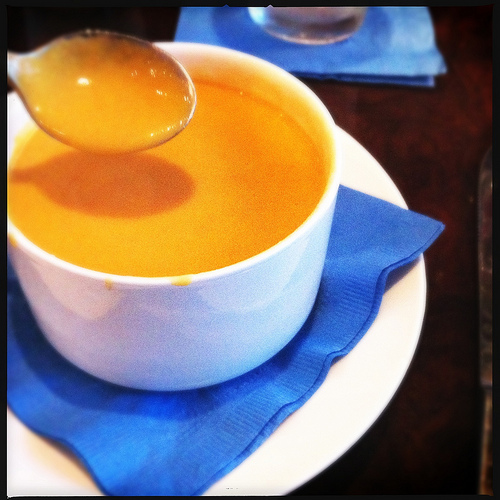 Several friends had recommended the Striped Bass en Papillote (citrus and curry bass cooked in paper with asparagus, tomatoes and coconut green tea rice), but our server told me that since Bleu is in the process of changing their menu, they didn't have it. It was totally fine, though, because what they did have was a grilled bass filet served with rice and citrus salsa on special ($25). 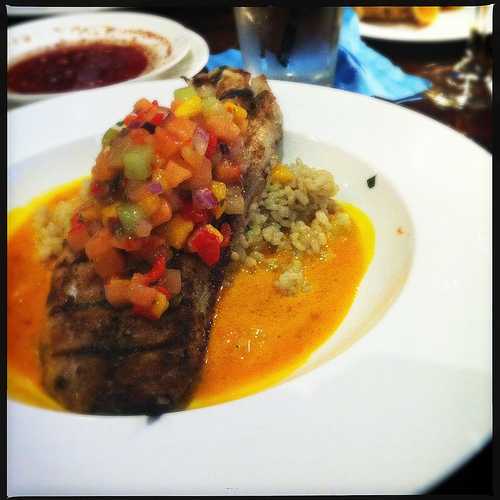 The portion was huge, and it the sweet, spicy salsa was a perfect compliment for the smoky grilled fish.

I got lucky in that my friend / dinner date John ordered the the Salmon Roulade ($27). It's one of the prettiest things I've ever seen on a plate. 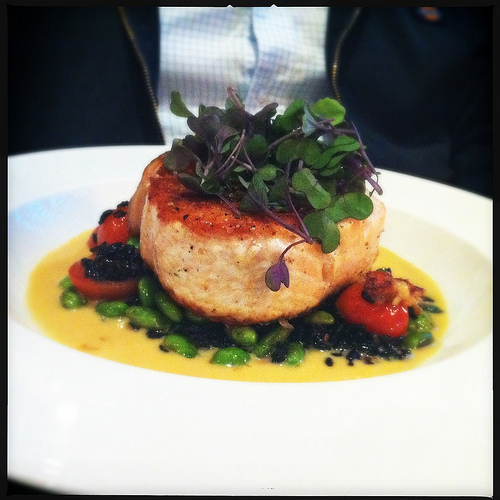 It's a piece of roasted salmon stuffed with shrimp, scallops and crab on a pile of edamame, black rice and cherry tomatoes. While my bass was delicious, if I could go back and order all over again, I would get the salmon.

I liked that the menu had wine recommendations for each dish - very helpful if you're like me and want a glass of wine, but aren't super knowledgeable.

Bleu is open daily for breakfast, lunch and dinner, and they accept all major credit cards. They offer complimentary valet parking.