7 Pieces of Public Art Every Memphian Should Know

7 Pieces of Public Art Every Memphian Should Know

Editor's note: Local public arts guru John Weeden was kind enough to write this guest post for I Love Memphis. He's the former director of the Urban Arts Commission and the current director of Vita Brevis Arts Bureau. Here are the seven pieces of public art that every Memphian should know (and a few that you'll be able to get to know soon): 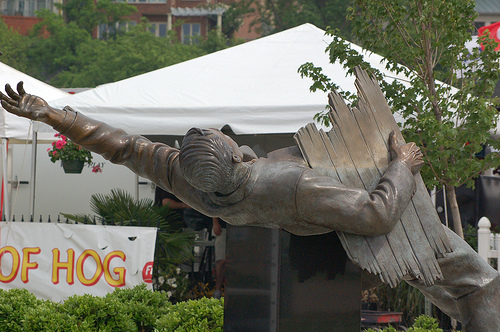 In 1925, a lumber worker named Tom Lee saved 33 people from drowning in the Mississippi just south of town when the steamship M.E. Norman capsized. Despite the fact that Lee could not swim himself, he plucked the survivors from the water one by one and ferried them ashore to safety in his trusty skiff the 'Zev'.

President Calvin Coolidge called him a hero, the City of Memphis gave him a job for life with the sanitation department and delivered Thanksgiving and Christmas dinner to his family until the end of his life. The monument in Tom Lee Park by David Allan captures all the drama of the precise moment when Lee, calm and steadfast under pressure, is just about to clasp the hand of a drowning man, pulling him back to life. This story is one for the ages, and so is this sculpture.

2. 'A Note for Hope' at AutoZone Park - mural by Jeff Zimmerman 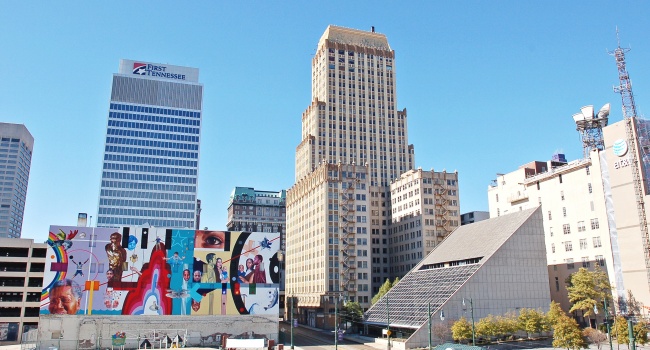 This was project coordinated by a group of Rhodes College students as a summer public art apprenticeship during my transition from the leader of the CODA program at Rhodes to Executive Director at the UrbanArt Commission. The largest exterior mural in Memphis, it was designated a cultural landmark by the State of Tennessee, and was featured in the New York Times and on the "Today Show".

It depicts images of real Memphians who posed for the artist to create an iconic work of art that seeks to provoke new ideas from its audience, inspiring the community to dream of its best self. 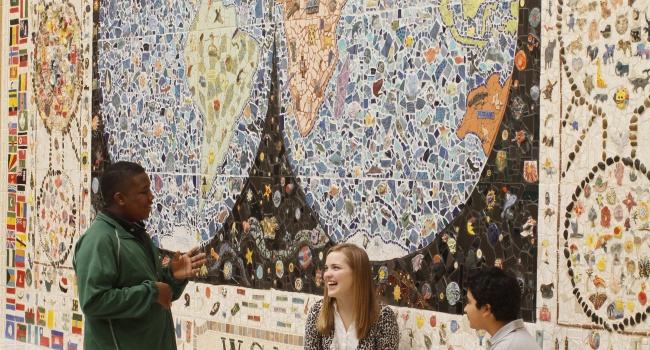 This piece, measuring approximately 30 ft tall by 65 ft wide, is composed of over 250,000 individual pieces of tile. Every student, parent, teacher, and staff member at the East Memphis school helped to produce the work, which was appropriately called a "masterpiece" by the Commercial Appeal when it debuted in 2008. Photo by Justin Fox Burks.

4.Mosaic in the Lemoyne-Owen College library -  by Ben Shahn 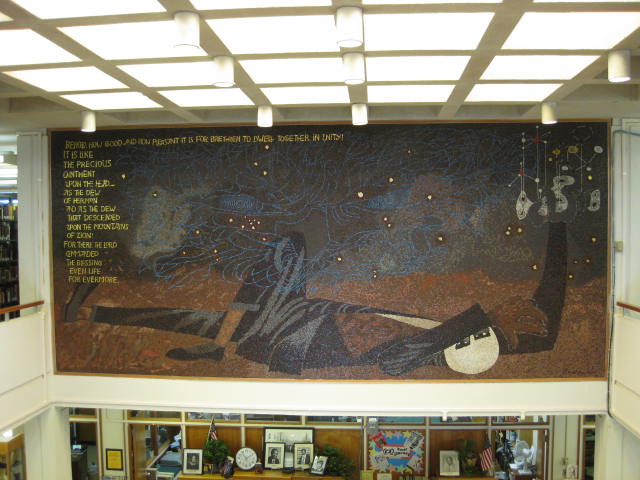 Installed in 1962, nationally renowned artist Ben Shahn dedicated the mural to poets, writers, artists, and musicians "who through word, image, and sound point to things of the spirit and man's nobler aspirations toward goodness, beauty, and truth." The inscription included is from the Old Testament, and reads: "Behold how good and how pleasant it is for brethren to dwell together in unity..." This is truly one of the jewels in the crown of our city's cultural heritage of which we should all be proud. Photo by John Weeden. 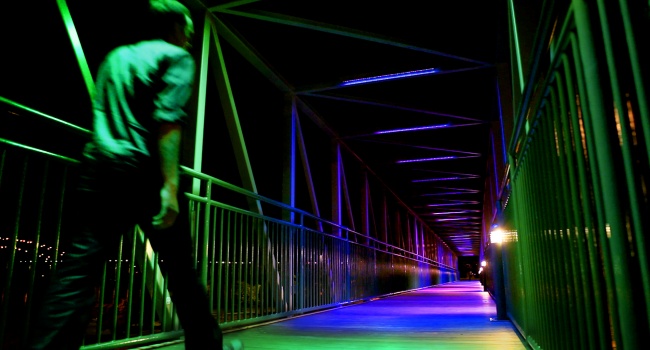 Designed to trigger a different unique series of color patterns and effects with every movement made by a walker across the bridge Downtown spanning Court Avenue at Riverside Drive, this is Memphis' first permanent piece of 'new media' public art. Visible only after dark, it has become a destination for families whose children love running across the bridge enveloped in colored light. Photo by Damon Seeley.

6. History of Raleigh and Frayser at James Road and Scenic Highway - mural by Jeffery Unthank (*to be installed later in 2012). 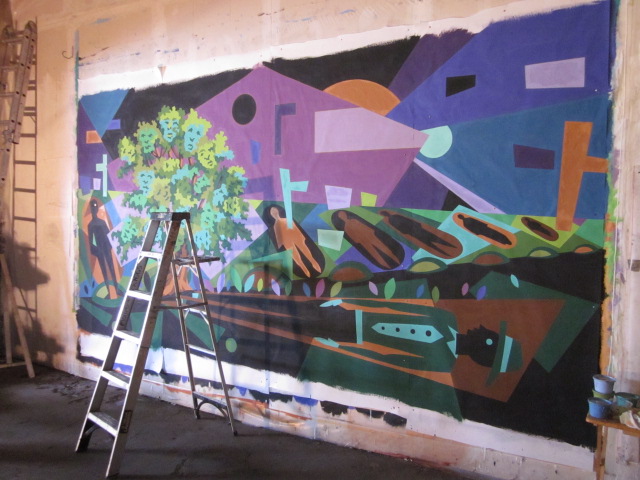 Local artist Jeff Unthank's depiction of area history across 100 different panels in all different styles will no doubt be one of the most culturally significant public art sites in the city when completed after September this year. Working indoors on a material known as 'parachute' cloth, the sections will be installed like wall paper on retaining walls on both sides of the road that crosses the border of these two communities. Photo by John Weeden. 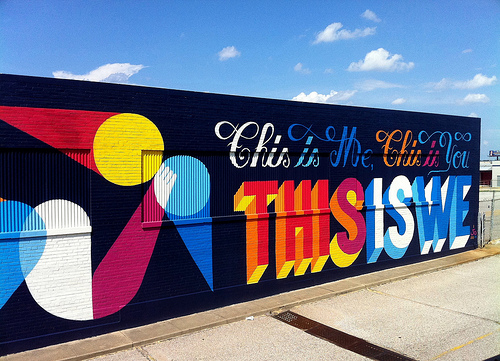 Property developer Bob Loeb saw REMED's colorful mural works in the Wynwood district of Miami and had to have one for his warehouse on Broad. Working with local mural maestro Siphne Sylve he soaked up the spirit of the city over a few weeks and produced this amazing testament to his experience here.

And a Few Upcoming Projects to Watch:

- The Gateway Arch at the Levitt Shell by Chris Fennell - your threshold of wonderment is about to be smashed.

- When I left the UrbanArt Commission, there were a total of 53 projects in the pipeline with production budgets secured, which means Memphis is going to be swimming in public art with new works debuting over the next several years.

This post was written by John Weeden, former director of the Urban Arts Commission. He blogs at Weeden Arts Watch and runs the Vita Brevis Arts Bureau. 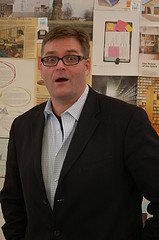 "your threshold of wonderment is about to be smashed." I love this guy!

Public art is worth shouting about! Yay!

First, was unaware of some of these mosaics. Amazing. Second, Tom Lee was a bootlegger, not a lumber worker. That's why he was crossing the river at night. 3rd: Who did the bridge of lights? Proper props, please. 4th: the French spraypaint artist who did the Broad Ave mural has a real name. What is it?

OK, I see the names for Bridge of Lights.

I am ashamed to say that I have a daughter at LeMoyne Owen and I had no idea this beautiful mosaic was housed there.  Great, eye-opening post!

For entry #2, the muralist's name is Jeff Zimmermann with two 'n's. http://www.jazim.com/

Ha! Awesome! I haven't gone to a gig alone but I think I would as long as it was a concert I'm a bit afraid to go to bars/pubs alone though. I'm also afraid of eating at restaurants alone! It's a bit weird, I know.

Great Blog! We are building a website to promote public art in Memphis and would be thrilled to have your permission to use the photo from 'A Note for Hope' as the main photo of the section. If you want to see it on our site here is the link: <a href="http://www.art-city.org/memphis-art-s/1877.htm">Memphis Public Art</a> We can remove it immediately if we do not have your permission. Thanks.

Hi Ronald - it's not my photo. Check with John Weeden.

John Weeden: delivered best monologue from Oedipus Rex ever. I'll never forget that. Thanks for continuing with arts and helping the community!