The Russian Cultural Center Bridges the Gap Between Memphis and St. Petersburg

The Russian Cultural Center Bridges the Gap Between Memphis and St. Petersburg

According to my internet-based calculations distance from Memphis to Moscow, Russia is 5456 miles. It would take about 11 hours to fly there, and when you got there, the time would be nine hours ahead of the time in Memphis.

It's a much shorter distance from Memphis to the city's new Russian Cultural Center. 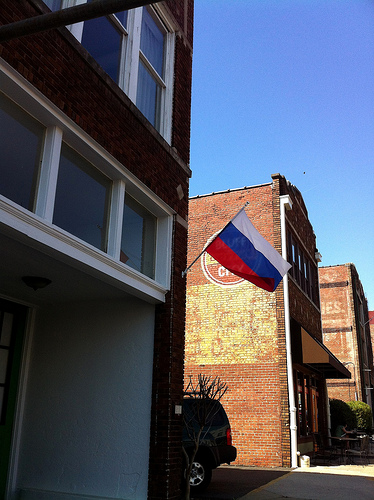 The center, which opened on South Main St. in January wants to shorten the cultural distance between the American south and Russia through its programming. The center offers special events (a recent one was a lecture on Russia's World War II veterans), Russian language and ESL classes and musical performances (like a Russian pianist who plays early Memphis rockabilly).

Anna Terry, who is the president of the Center's non-profit, the New World Connection, sees the Center as a way to form important and lasting connections between the young people of Memphis and Moscow. The center hosts Russian exchange students (and helps send local students abroad). When the Russian students get to Memphis, the Center helps them find internships in their chosen fields, helps them with their English and organizes group social outings.

Right now, there's no way to tell how many Russian speakers are living in Memphis, but the Center is working on it. They've partnered with Rhodes College students to track down Memphis' Russian-speaking community.

O fraptuous day, calloo, callay, she chortled in her joy upon reading this piece,!!  How about translating Alice in Wonderland to Alice in Russia? Mom & Dad