After a Grizzlies game got out a few nights ago, I found myself wandering downtown in search of dinner. I didn't want anything too fancy, and I wasn't feeling a bar. After a few attempts, And there, in the middle of Second St., was Flying Fish, glowing like a bright white beacon of semi-late night dining.

After staring at the giant overhead menu for a few minutes, we settled on a poud of snow crab legs($14)  and a Protein Platter ($16) , a meal that includes your choice of two various kinds of fish (we got a dozen oysters and a grilled catfish filet). It seemed like a reasonable amount of food for two people. 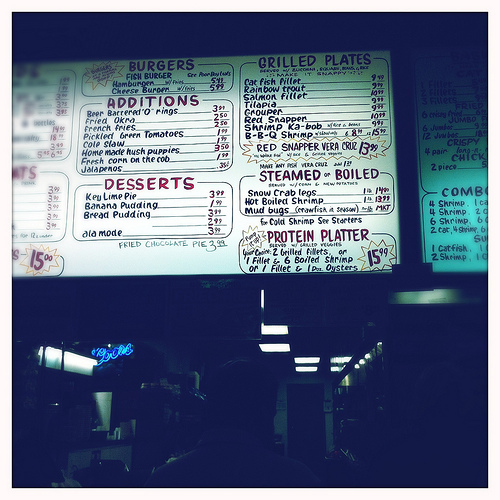 The guy at the counter gave us a buzzer and our drink cups and we went and sat down on the enclosed porch, beneath a wall of mounted plastic Billy Bass. Apparently, if your bring your retired Billy Bass (or wood-mounted shark) to the Flying Fish, they'll trade you a catfish platter for it. We tried pressing the buttons on a few of them, but the staff had removed all of the batteries. 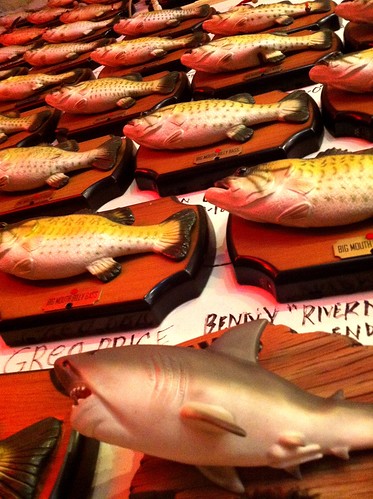 When our buzzer went off and I went to pick our food up from the counter, I realized that we had ordered way too much food. While one person can easily take down a pound of crab legs, I'm pretty sure that the protein platter is meant to be shared between two people. 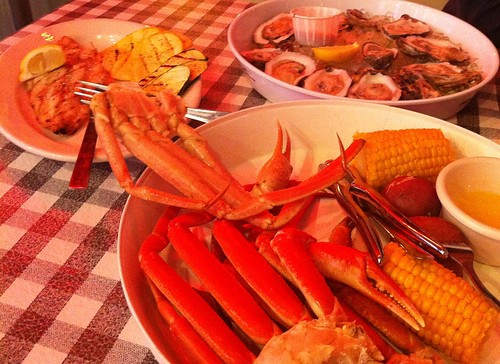 I started with the catfish, which is quite possibly the best piece of grilled fish I've ever had. It was perfect - super fresh with that almost too-good-to-be-real smoky taste. Oysters aren't really my thing, but my dinner buddy assured me that they were good.

A pound of crab legs winds up being about three full claws with two pieces of corn on the cob and two whole boiled potatoes. There was a cracker on the plate, but most of the legs were flexible enough to break with my hands.

Flying Fish is open daily for lunch and dinner. The dining room is huge, and it's perfectly family friendly. They've also got  beer and giant margaritas, if you're into that sort of thing.

Had no idea they had crab legs. Been looking for a place close by since Zinnie's closed! Thanks for the suggestion!!

They also have the best fried zucchini I've ever had. I crave it at least once a week.