There are a lot of reasons to love Tony Allen, the Memphis Grizzlies' resident utility player / enthusiasm generator. In the last year, he's gone from an unknown into something of a local folk hero for his mid-game antics, enthusiastic bench warming and involvement in the community. 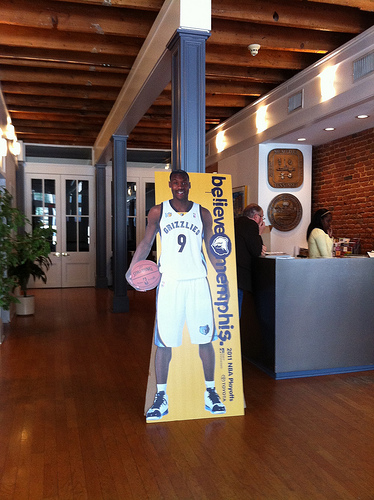 And while I appreciate all that Tony Allen has done on (and off) the court, his Twitter account is by far my favorite reason to love him. He's a prolific poster, posting dozens of times every day about whatever's going on in his head. Nothing is off limits - he shares his thoughts on airport security, live tweets car wrecks and gives play-by-play of NFL games.

He does all of this with an enthusiastic (and a little spastic) approach to syntax, grammar and punctuation. I've never seen anyone have as passionate a love affair as the one that Tony Allen has with the exclamation point.

When the Flyer's annual Best of Memphis issue came out, reporter Chris Herrington christened him "Best New Memphis Culture Hero", ending the piece with "Tony Allen is happiness. End the lock out."

Well, friends, the lockout is over. And in celebration, I've collected video of Memphians reading some of Tony Allen's greatest tweets from the past few months:

Fav TA tweet of all time: "If ifs were fifths,,,we'd all be drunk."

And also his epic response when he had a tragic spelling error (Re: Where the pot at? when he meant to type "Where the Spot at?") Next tweet: "Can't grit and grind unless you drug free tweeps."

Halloween Tweet  "Sorry kids it's a lockout, no candy. Got chicken and beef ramen instead!"

glad u love memhis. I am Mayo's former housekeeper. But I would like to know where u will be so I can get u to sign picture fory grandson.