A Rare Trip Inside the Sears Crosstown Building

A Rare Trip Inside the Sears Crosstown Building

For two years, I've been staring at the Sears Crosstown building's art deco facade from my home office window. The building, which has been empty since 1989, looms large and mysterious over my house. Like many Memphians, I've stared at it for years, wondering what it's like inside. 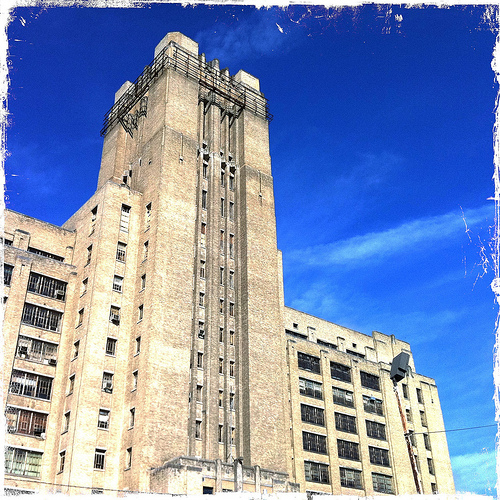 Artist Robin Salant invited me to come with her while she checked up on the colored light project she's installing in the building (through a Crosstown Arts grant). The project is a series of moving, colored lights that go flicker nightly from 7 p.m. until 11 p.m. 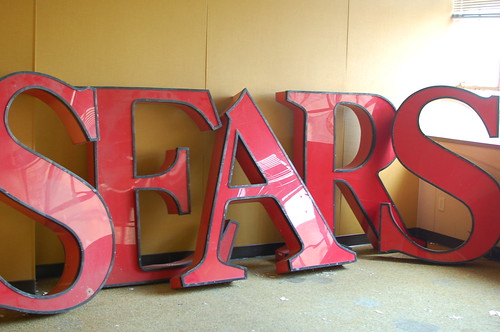 The building, which was completed in 1928, housed a Sears store, warehouse, offices and distribution center. After the building closed in 1989, it sat empty for years. Recently, several local organizations and developers have started trying to figure out how to revitalize the iconic building (and its surrounding neighborhood). There's no solid plan yet, but I have very high hopes for the building's eventual restoration and use. 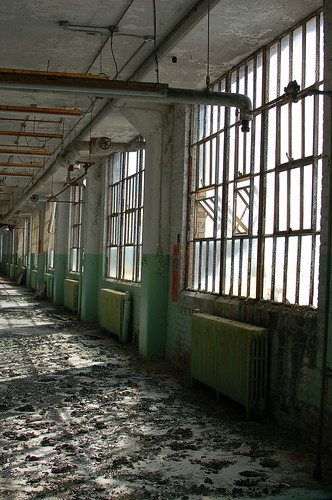 Here are some photos I took on my trip inside:

There's a room in the tower that houses all of the elevator controls. 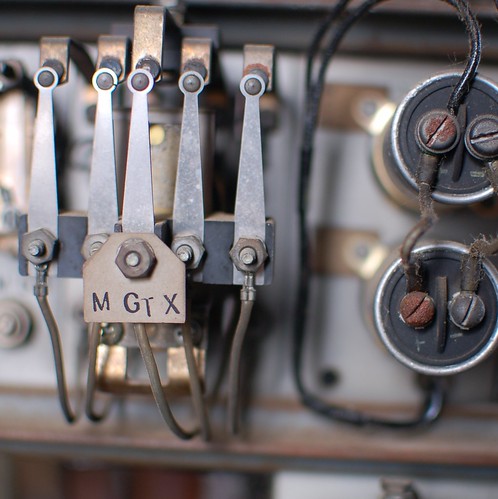 Because there are so many broken windows and cracks in the building, nature has found its way inside. 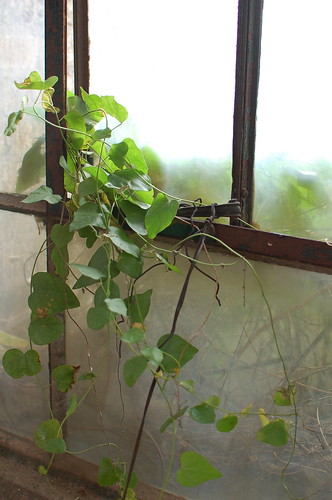 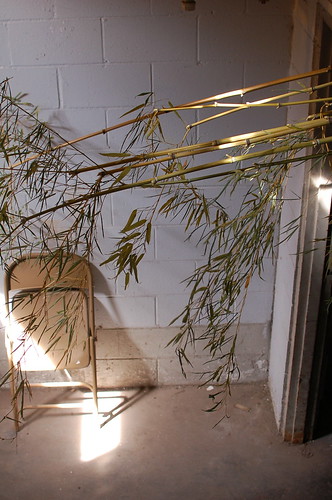 Part of Robin's installation includes covering the south-facing windows in theater-grade light gels so that the illuminated windows are colored. Here's what it looks like from the inside: 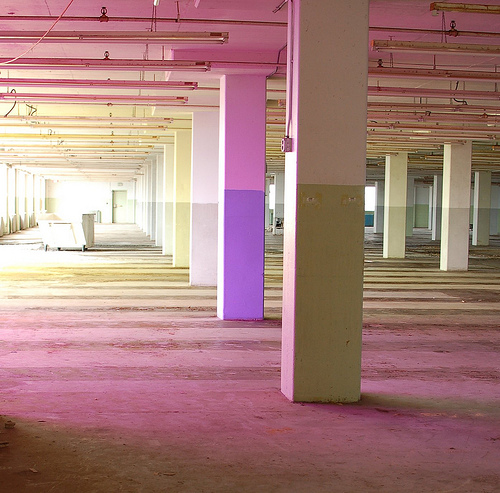 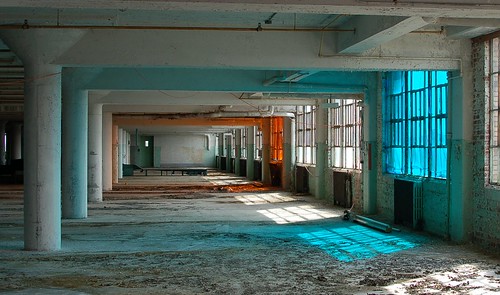 All of the lights are fluorescents or LEDs that are powered by batteries which are charged by solar panels on the roof. 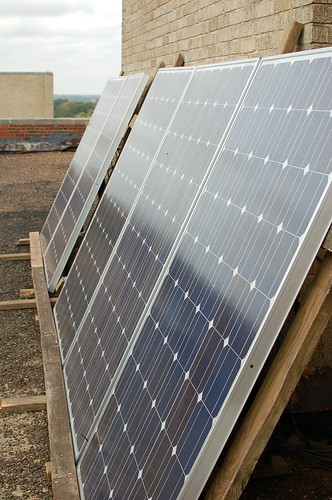 In order to get to the solar panels, though, you have to climb through a window.

But once you're on the roof, the view is pretty awesome. 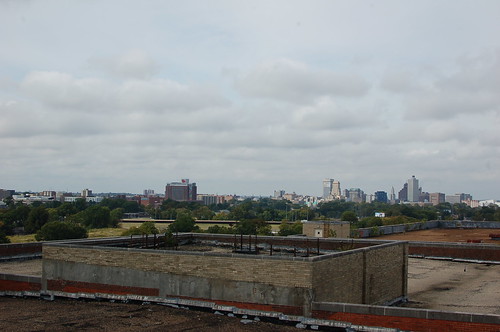 Here are a few more pictures of the inside of the building:

The coolest part of the building is the top room of the tower (of course). It's not because it's the tower - it's because of what's inside. I don't know what I was expecting - maybe some sort of penthouse office - but here's what lives there: a giant red water tank. 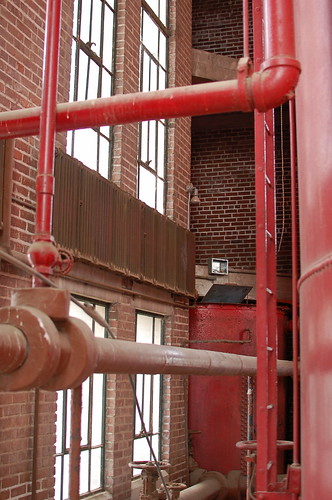 You can't tell from the picture, but the tank (that's it on the right) is at least four stories high and 30 feet wide. It held the water for the building's sprinkler system. 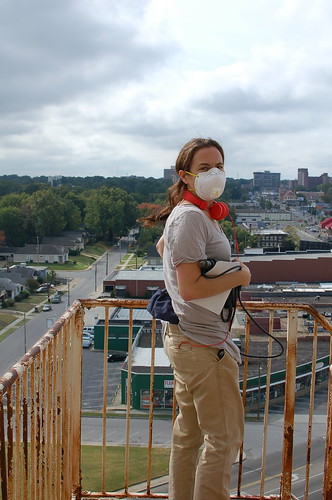 Thanks again to Robin Salant for taking me in the building today. You can see her lights nightly on the south side of the building and - sometime next week - in the east-facing tower.

There are more photos from the building on my Flickr stream.

Thanks for the pictures and report. My grandmother worked there in the 30s. Love that place.

I just wonder, why? this is such a fascinating building and to have life in it would be a "greatnes to the beautiful city of Memphis. what could be done to restore life to it? thanks for allowing us to view what's inside.

Thanks for sharing. I have always been fascinated with that building.

Thanks!! I remember going there in the 70s. It's such a shame that it's empty now. Flashing colored lights are a lot better than a dead building though.

Thanks for coming out today, enjoyed your company, and your photos! :) facebook.com/crosstownlights

We used to go there sometimes when I was a kid, in the basement they’d have these giant clearance sales. The rest of the building was already closed off and seemed very creepy. I read in the Memphis Flyer in the past that people have wanted to buy it and turn it into apts but that would be a great undertaking b/c it is in such a state of disrepair and also asbestos issues. Thanks for these great photos. I'm surprised by all of the sunlight and that it appears rather clean, considering how long its been sitting there without any maintenance.

Glad to see something awesome is starting to happen with that amazing building!

WOW!!! Now that the Atlanta plant is seeing a renaissance, we hope and pray that this architectural masterpiece can get some much needed TLC as well! Thanks so much for sharing!

This is random, but some of these pictures could pass as art.

Thank you so much for sharing this! For years I have wanted to know what was inside that building. I am glad it may be brought back to life in the near future!

Thanks for sharing these amazing photos.  My dad retired from Sears in 1980 after 35 years of service.  I remember having lunch with Pop in the "executive" lunchroom when I was a child in the early 60s.  It was very different then.  My dad was a buyer for the catalog division, which does not exist any more.

[...] like a good plan to me.  It was an absolutely gorgeous day to perch on a lawn chair and ponder the historic Sears Building. My grandmother used to work there and I can’t drive by it without thinking of her.  I hope to [...]

I wish I could get inside this place for photos.   Dreamland for a photoshoot.  Thanks for sharing!

We Shopped there in the late 40's and 50's. We live on Tulley, then Dempster.  Since pharmacy school I've lived in: Bluefield, WVA; Nashville; Ft.Baker; CA, Korea; and Texas. Thank you,   Maurice

We Shopped there in the late 40's and 50's. We lived on Tulley, then Dempster.  Since pharmacy school I've lived in: Bluefield, WVA; Nashville; Ft.Baker; CA, Korea; and Texas. Thank you,   Maurice

I worked for sears for alot of young life and i have       great memories of working those years in the crosstown store.It was the best place to work back then the company took great care of all its people.I am moving back that area i can see the from my home i am just so happy to see people are taking an intrest  in that great old building.

Holly, Could you ask Rebecca Wigand if she would be willing to share her Dad's name? Having worked many years with Sears Catalog and most of those years were there at the Crosstown location (495 North Watkins). Hey! We may have been good friends as well as co-workers. Sincerely, Bates Crabb

Sprightly article, Holly. Are you covering the opening tomorrow, 2/21/15?   HS

Yes I'm really interested in a tour of the Sears building I've been coming to Memphis for the last 6 years taking care of my mom she grew up here in Memphis and used to shop at the Sears building it wld be a great gift to my mom if she cld take a tour. Love Memphis❤