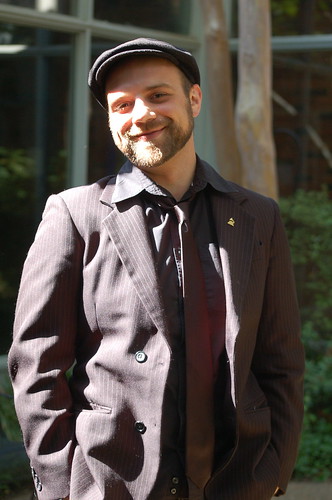 Meet Memphian #103, Daniel John Russo. He was kind enough to share his thoughts about his favorite watering hole, his hopes for the future, and what it's like to work at a legendary Memphis recording studio.

Hometown: Outside of Philadelphia, PA

The most fun I’ve ever had at work: was possibly recording on Maynard James Keenan's Puscifer project. They did a song called "Cuntry Boner," which called for a bunch of hoots and hollers and claps and stomps. So we piled in the studio and acted like idiots for 3 or 4 takes. We all made it onto the record. We're credited as "The Ardent Rabble."

My favorite local band is: recently, Tiger High. Their new release has been blowing my mind for a few weeks.

My favorite local watering hole is: the Hi Tone. Best wings/pizza/entertainment/staff you could ask for. They have PBR in 3 formats!

In the future, I hope that: I am alive, part man and part machine, and that I am sent back in time to save some babes from some totally heinous mustached villains who have them tied and bound to the tracks, awaiting their locomotive fate. And it's in black and white.

The best thing about working at a legendary recording studio is: meeting great people all the time, famous or not, who are excited about becoming part of the more than 45 year legacy that we are so very proud of here. I'm so fortunate to be a part of it myself. Oh, and the stories.

I want: my dog to live forever, to ride my bicycle across the country one day, to return to Southeast Asia, world peace, an end to suffering, etc etc. Oh, and a new guitar built to order by Joel Gradinger.

The last meal I ate was: leftover Tuckers. Sundays are made for being lazy.

My favorite local secret is: the new taqueria called El Diablo in Cooper Young. It's Ben Vaughn's newest venture. There's no sign on the outside, so you might miss it if you're not looking too closely. I'm sure it won't be a secret for long though.

The first record I bought was: I think it was a cassette tape of the soundtrack to Wayne's World 2. Which included Dinosaur Jr's "Out There." Man.. I used to rewind it over and over again. You know... back when you had to actually rewind things.

I love Memphis because: it's a city on the rise. It's easy to move to an Austin/Denver/Portland type city and become part of a scene that's already established and green and pretty and polished. It's not to say that Memphis isn't all of those things in some way, but it's just another thing all together to be able to help a city find it's progressive footing and be able to be a part of it's motion into the future. People are making great changes here every day and it's just cool to see it happening in front of your eyes.

Sounds like a cool dude. And if you replace 'John' with 'La', he's the Karate Kid. I need to check out this El Diablo and Tiger High.

I love his "I love Memphis because" response. Totally on the money.

i can confirm that dan has a bike.

I can confirm that Adam is a Memphis Hottie.

Dan is my idol

The ROOSE is my hero!

Love it. Miss ya, bro. You are Memphis to me. You're the reason I get homesick for a place that isn't technically my home. What is it about this damned city that you just can't shake?