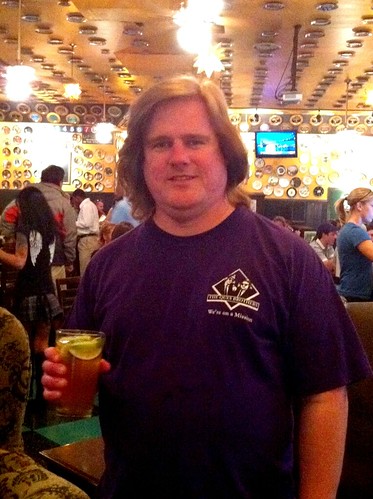 When they're in need of things to do, downtowners turn to Paul Ryburn and his popular blog, which is loaded with information on downtown events and news. Paul is downtown to the core - he lives downtown, goes out downtown, and magically seems to be able to make appearances at just about every major Memphis event.

Here, he answers my questions about downtown secrets, tube top month and the questions he's sick of being asked:

Occupation: I'm the Webmaster for the American Contract Bridge League in Horn Lake, and I do some affiliate marketing websites on the side. I'm known for my blog, but don't make any money directly from it.

Hometown: Little Rock, AR (But I've been a Memphian for 24 years.)

I love downtown because: of the strong sense of community. I can walk into nearly any business down here - be it a grocery store, bar, restaurant, or whatever - and people recognize me and know me by name.

My favorite annual event is: Memphis in May BBQ Fest, because I get to hang out with my teammates the Ques Brothers.

I would love it if South of Beale delivered.

Tell me something I don’t know about downtown: There's a street called Hadden Street in the South of Forum area. It splits off from Third and runs south to G.E. Patterson Avenue. Many people know it was named for Memphis mayor John Hadden. What most people don't know is that Hadden was also the inventor of the "Hadden Horn," a device to guarantee a fair roll in dice games.

I want: to be independent. I enjoy my job, but if I could figure out a way to blog, do social media stuff and do affiliate marketing on my own for a full-time income, that would be ideal.

I’m sick of being asked: "Why do you have so many limes in your beer?" The bartenders at the Flying Saucer give me extra limes in my Dos Equis Lager. Sometimes they take it to extremes.

So, what’s the deal with Tube Top Month?: Well, the first rule of blogging is to write about what you love, right? I started it in 2005 and it caught on.

My perfect evening involves: a filet with garlic mashed potatoes cooked by Chef Patrick Reilly at the Majestic Grille, followed by beer and conversation with good friends at the Flying Saucer or maybe Bardog Tavern. Wrap up the evening with a little dancing at Paula & Raiford's Disco, then late-night breakfast at Cockadoos.

Memphis is special because: compared to other cities, it's easy to find like-minded people and get connected within the community.

I’m excited about: the Grizzlies! No matter how far we go this year, it's clear we're about to enter a long period as one of the dominant teams in the NBA.

I love Memphis because: my friends are here.

I love this story