Whose House? Griz House!: a Night With the Grizzlies' Super Fans

Whose House? Griz House!: a Night With the Grizzlies' Super Fans

They meet in the FedExForum lobby 15 minutes before the start of the 7 p.m. game against the Milwaukee Bucks. There are about 20 of them, all dressed in blue. There is a man who looks like a Grizzlies-themed hobo with his blazer, dyed-blue beard, blue wig and fedora. There's a man wearing blue-tinted sunglasses and dangly Grizzlies earrings. There are headbands, autographed jerseys and giant strands of Mardi Gras beads.

These are the Super Fans, and they're about to begin their pre-game "swagger", a lap around the Plaza level of the arena.

Each one of the super fans, from the 9 year-old girl to the middle aged guys, had to audition for their spot. In exchange for club-level season tickets, these mega-supporters have to commit themselves and their vocal chords to attending every game of the season (they're allowed to miss two). 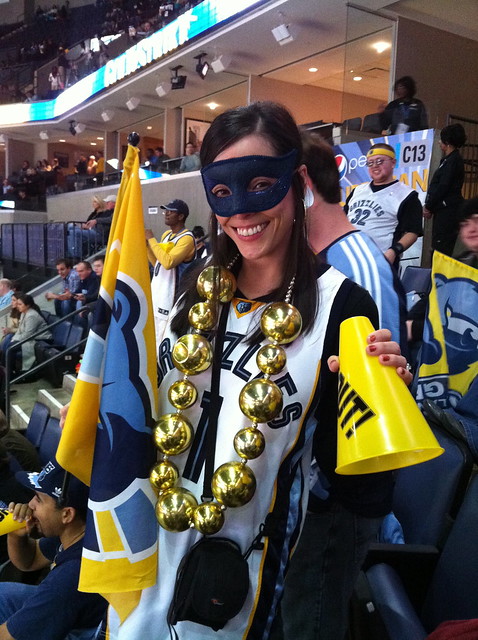 At Friday night's game, the chanting started during the swagger and didn't stop. They cheered the starting line-ups. They cheered the National Anthem ("USA! USA!"). They cheered for the time-out entertainment. They cheer for the Griz Girls. Every time Marc Gasol makes a shot, they sing a song that consists of the repeated word "Ole!". 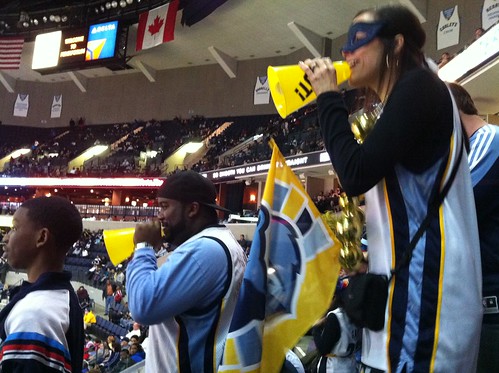 But the super fans seem happiest when the cheers rhyme, and a lot of things rhyme with "buck". A guy named Mario Latilleon starts a chant of "What the buck?" when one of the refs makes a questionable call. There's also a healthy dose of "Buck's suck!"

Head cheerleader duties seem to be shared between a middle aged guy in an autographed jersey who loves Hasheem Thabeet and Debby, a grandmother  with frosted hair, blue painted nails and incredible lung capacity.

What's so nice about the Super Fans is their extreme amount of hometown pride. They love it when the Grizz win, but they're still there, cheering, if they lose. They know their basketball, too - bad calls don't go unnoticed and when I was there, there were some impressive stats discussions.

If you think you've got what it takes to be a Grizzlies super fan, prove it on Saturday Feb. 26th. They have 10 more slots open for those who win the auditions. The winners will win tickets to all of the remaining games this season. To try out, show up at 5 p.m. on Saturday the 26th. Stretch your vocal chords and wear your blue.