Set down your pork sandwiches and ribs -  it's time for the Wild Card Bracket. This round is all about the unique, not-quite-barbecue items on the menus at local barbecue joints. In the first round, judging is based on the wild card item, service, atmosphere and price. 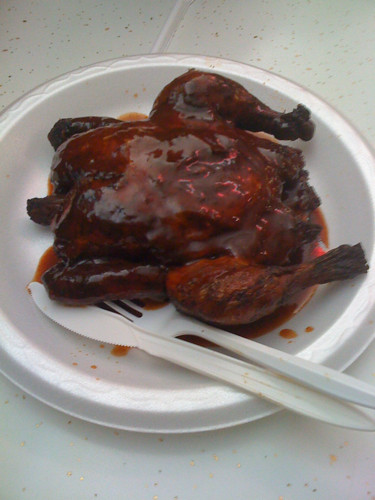 And in this corner, the barbecue nachos from that Midtown house of efficiency, Central Barbecue: 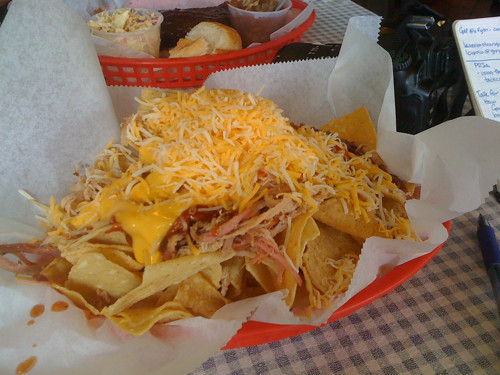 The Cornish game hen is a mostly-whole (it's headless) chicken covered in barbecue sauce, served spread-eagle on a styrofoam plate. It's kind of cute. Most of the flavor comes from the sauce, which pools underneath the chicken. I got the hot sauce, which was really good (and so hot that it made my lips all tingly). The chicken is good, but it gets a little bland deep under the skin. I wound up cutting pieces off, then dipping them in the excess sauce. The easiest way to eat it is carefully, with a knife and fork. (7 points)

Central's barbecue nachos are fairly simple: piles of pulled pork on tortilla chips, topped with barbecue sauce, melted cheese, shredded cheese and (optional) jalepeno peppers. I got a half order, and it was huge. I would only recommend a whole order if you're sharing with at least one other person. The nachos are really good - there's something magical in the combination of barbecue sauce and cheese sauce. They're surprisingly easy to eat (and completely addictive). (8.5 points)

At Cozy Corner, you place your order at a counter, take a number and have a seat. Everyone was friendly, and the food came out in about 10 minutes. (7 points)

I always feel like I'm in trouble when I eat at Central Barbecue during lunch rush. You'd better know what you want when you get in line, and servers weave their way around the packed dining room, barking numbers. But it's fast. My nachos came out about four minutes after I placed my order. (8 points)

Cozy Corner has a really distinct (and unique) vibe. There are bibles on the counter, colored fluorescent tube lights and wood paneling. It's what would happen if a skating rink, a Sunday school classroom and Wiles Smith Drugstore were located in the same building. It's dark and blue and quiet. (8.5 for the bizarreness of it all)

The atmosphere at Central is exactly the opposite. It's bright and crowded and loud. Tables in the dining room are so close together that people are constantly bumping into chairs. I'll never get used to the collection of smiling pig figurines on the counter, though. (7 points)

A half order of Central's nachos is about $8, which is completely fair for the amount and quality of the food. (7.5)

The Winner: Central's barbecue nachos, with 31 points. The Cornish game hen was a close second with 29 points.

I like the nachos from Central but not as much as Corky's. If you're gonna have nachos, you need nacho cheese on them.

Just some food for thought...central bbg, corkys and all the other bbq joints in tow that have sold out and started cooking there meat in a gas powered cooker should be disqualified from the contest. They have forsaken everything that made Memphis bbq great! When cooked over gas it should simply be called pork roast. Don't get me wrong pork roast is good but it simply is not Memphis style bbq!

Yum. I had some for lunch today

Cozy Corner hands down! Why? Because Cozy Corner did not sell out like most other BBQ joints. Besides, John H is right. Get it together folks. Any pork cooked over gas is pork roast and is not true BBQ. To call gas cooked pork "Memphis Style BBQ" is blasphemous.

know your cooking techniques guys, all the gas cookers do is use a small spark and gas flame to ignite wood. ALL the heat AND smoke comes from burning wood that is loaded into a side chamber. there is absolutely no cooking being done with gas. (at least not at Central)this is very different from cooking with gas as you fellas are suggesting. these are some of the same cookers that are used in championship bbq competitions around the world. I will give you that the gas starter may be cheating a little, but it sure beats having to sit up all night 365 nights a year to load wood on the pit every 3 hours. it's called inovation. I would love to see everyone cook with an open fire spit or bury a whole hog in the ground but that just isn't feasible. any suggestion that....."central bbg, corkys and all the other bbq joints in tow(n) that have sold out and started cooking there meat in a gas powered cooker should be disqualified from the contest. They have forsaken everything that made Memphis bbq great! When cooked over gas it should simply be called pork roast. Don’t get me wrong pork roast is good but it simply is not Memphis style bbq!" is absurd. mabye this blog should be posted by carrier pigeon?

I've worked at Corky's for 21 years & I can tell you that the grill is gas, but all pits where shoulders & ribs are smoked are strictly charcoal & hickory.

[...] Shop, with 29 points. Tops came in second with 25.5 points. The barbecue spaghetti will face Central’s barbecue nachos in the second [...]