It's the last game of Round 2 in the Pork Sandwich category of the Barbecue Brackets, and today's contestants are battling for a coveted spot in the championship round.

Let's meet them, shall we?

In this corner, a sandwich and sides from Millbranch's favorite mostly-glass barbecue shack, Coleman's: 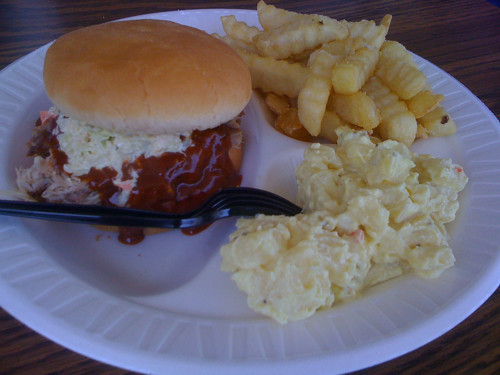 And in this corner, Payne's, a midtown / South Memphis staple: 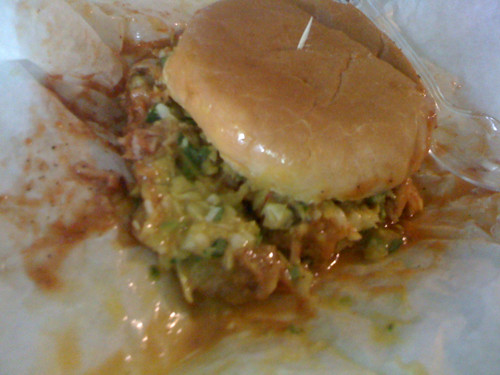 I'm all for adding slaw to a sandwich when it does something to enhance the sandwich. If the slaw doesn't add any sort of texture, flavor or crunch, it's arbitrary. Sadly, the slaw on my sandwich from Coleman's didn't make much of an impact. It just lazily hung out, buried under a ladleful of hot sauce. That said, the sandwich was good - the meat was tender and the hot and spicy sauce was awesome. (7.5 points)

The last time I ate Payne's slaw, I had it on the side. This, as it turns out, is the exact wrong way to eat it. On the side, the slaw is a scary radiation yellow mess. On the sandwich, however, it adds a sweet, relishy crunch. The slaw and the medium sauce have some kind of amazing reaction to each other. The meat on my Payne's sandwich wasn't as tender as that from Coleman's (there were a few straight-up crunchy pieces), but the sandwich was better as a whole.  (8.5 points)

It took a some maneuvering to pick up the Coleman's sandwich. There were approximately three inches of sauce-free bread. I didn't have to resort to a knife and fork, but the quantity of tiny, tissue-thin napkins I used was utterly wasteful. Barbecue shops, take heed: paper towels.  (8 napkins)

I didn't even try to pick up my sandwich from Payne's. I got it to-go, and when I pulled it out of its paper bag, its contents were almost leaking through the 2 pieces of paper it was wrapped in. There's no shame in using a knife and fork when you need a napkin just from unwrapping the sandwich. (4 napkins)

The fries at Coleman's are nothing to write home about, and the potato salad is of the sweet yellow church picnic variety. The fried okra, however, is delicately breaded and perfect with a little bit of hot sauce.  (6.5 points)

At Payne's my side options were chips or beans. I went with beans. Vegetarians, you can't eat these beans. They've definitely got some sort of meat parts in them. They taste good, but the weird bits of meat make the texture a little unsettling. (6 points )

One of the things I like about Coleman's is that it always smells like cooking. Yesterday, it was downright smoky inside. I could also hear the sound of meat being chopped. It wasn't super crowded around lunch, either. (8 points).

Payne's still has a weird churchy vibe. I went there today for a late lunch, and the place was completely empty. It's perpetually dark inside, and not terribly well ventilated. It's a good thing it smelled like barbecue.  (6.5 points)

The service at Coleman's was stupid fast. I had barely sat down before my number was called. The women behind the counter were friendly, courteous and precise. (8 points)

The same was true of Payne's. I placed my order and sat down for about two seconds before it was ready. The man working the counter was smiley and personable. (8 points)

A regular pork sandwich plate (a sandwich and two sides) and a drink will run you about $8. It's a little high, but it's a ton of food. (7 points).

At Paynes, you can get a giant sloppy sandwich and a small styrofoam cup of beans for $4.50, perfect for the hungry and the broke.  (8.5)

Winner: Payne's barely squeaks by with the win with 37.5 points to Coleman's 37 points.

Payne's will face Central in the Pork Sandwich Championship.

I've heard that the crunchy parts are actually what people love about Payne's sandwich.

i hate this blog

The first bbq I ate when I moved to Memphis some 26 plus years ago was Payne's. You know how you compare eveything else to that first love? Your first boyfriend, your first car, your first job. Well for me, my first tates of Memphis bbq could not have been a better choice. If I had to choose a bbq shop to gage Memphis bbq by Paynes would be the one I would use. No one else has come close to that first taste of sweet slaw with crunchy bits of meat with just the right amount of sauce. I like my bbq sloppy wet, I hate a dry sandwich. For this reason I have learned a painful lesson .... you don't eat bbq outside of Memphis.