Welcome to Round 2 of the pork sandwich bracket. Four sandwiches have made the cut and now they'll be judged on the sandwich with slaw, service, atmosphere, price, a side item, and the number of napkins needed.

Let's meet the contestants for the first round two match up.

Holding it down for Midtown, we've got Central Barbecue: 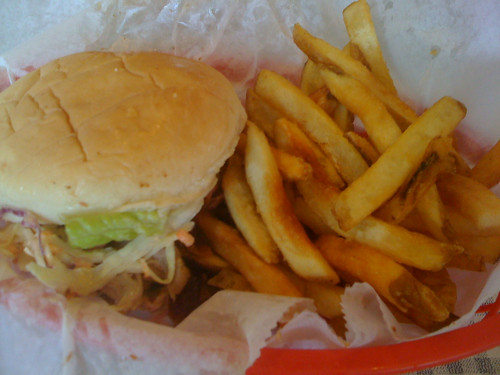 And in this corner, representing for extreme East Memphis, behold Captain John's: 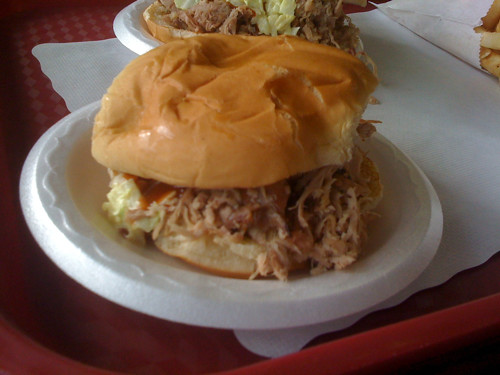 I'm not usually the sort of person who orders slaw on my sandwiches, but Central's sandwich may have made me a convert. Their super fresh homemade slaw added a nice crunch to the sandwich. The vinegary slaw mixed well with the slightly sweet, spicy sauce. The meat was crazy tender. The pulled pieces were big and light in color. So tasty. (8.5 points)

The slaw on the Captain John's sandwich added a nice kick. The meat was chopped rather than pulled. It was tender, and there weren't any gamy bits. The texture of the slaw was a little bit weird. While Central's slaw was more like adding lettuce to the sandwich, the slaw at Captain John's was more like relish. Tasty, but a little distracting.  (7 points)

I tried to pick up my sandwich from Central. After moving the fries out of the way and digging around a little with my fork, I couldn't find the bottom for all of the sauce, meat and slaw. I gave up and pulled the top of the bun off and made a little open-faced sandwich and ate the rest with a fork. Even with the fork, there was all sorts of sandwich all over the place. (3 napkins)

Captain John's sandwich was comparatively easy to pick up. However, I didn't get a very good grip and half of my meat and slaw fell off of the bun. The sandwich had a good sauce to meat to bun ratio. Though, bearded men beware - when my dinner companion looked up from his plate, his lumberjack beard was covered in sauce and slaw. (2 napkins)

I had fries and mac and cheese with my Central sandwich. The fries were damn near perfect, as always. The mac and cheese was super, ridiculously cheesey. Like nacho cheesy. It may give you a heart attack, but it's really yummy in small doses. (7.5 points)

At Captain John's, I tried the fries and the potato salad. The fries were good, but nothing to write home about. The potato salad was the nuclear yellow kind that's most often found at church picnics and funerals. It was cold and relishy and kind of undercooked. (5.5)

Central is undergoing some construction on their patio right now, which makes the restaurant look like it might not be open. It definitely is. The lunchtime crowd wasn't as insane as it was the last time I was there. There was no enormous line, and there were a few available tables. It was still loud and friendly and full of Memphians of all kinds. (7.5 points).

Captain John's was almost empty around dinner time the night that I was there. It's a very utilitarian place, and one get the sense that even if it was completely packed, the vibe would be one of concentrated quiet. I'm still not sure where exactly John got his captain credentials. (6.5 points)

At Central, you order at the counter and a waiter delivers your sandwich to your table after yelling your number at top volume. It's still crazy efficient, and the line (and the guy at the register) appreciate it when you know what you want. It took about 5 minutes to get the food after I ordered. (7.5 points)

Captain John's also has counter service. It's friendly and quick, but a little less efficient. They give you a slip of paper with a number on it, but they never called mine. The women behind the counter just kind of yelled that my order was ready. (7 points)

My sandwich, side and drink at Captain John's was $6.80. A little less expensive than Central, but some quality is sacrificed. Whatever. I'd eat it again. (7.5)

Thanks for the kind words about the store and food. I manage the Central location and am very much enjoying reading your BBQ Bracket. We strive to serve a consistently great product. Say hello when you come in if you like and may the best sandwich win.