It's the final match up of the first round of the pork bracket and two beloved and more-than-slightly sketchy barbecue joints are ready to battle it out to see which sandwich goes on to the second round. Let's meet the contestants:

Over here, we've got a sandwich from Payne's on Lamar: 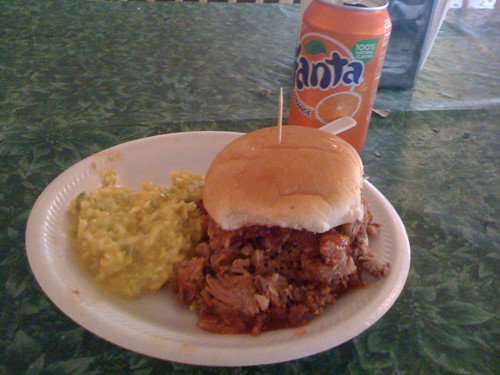 And over there, representing for extreme South Getwell, a sandwich from Tom's: 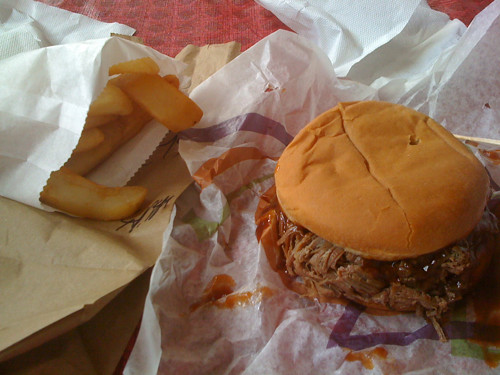 These were two of the messiest sandwiches yet. The meat quantity of meat way exceeded the carrying capacity of the bun, and the sauce seeped from the sides of the sandwich like little rust-colored rivers. Both made me regret wearing anything nicer than shorts and a t-shirt to lunch.

The meat on the Payne's sandwich was chopped and liberally doused with sauce. The meat was super tender. Texture-wise, I hit a few more fatty bits than I'm really into, but when I was able to avoid them, the sandwich was completely, insanely amazing. (8.5 points)

The meat at Tom's was more uniform in texture. It was good - tender chopped and pulled pork piled high on a bun. The only problem is that it just wasn't as good as the one from Payne's. (7 points)

Part of the reason I though the Payne's sandwich was superior was the sauce. It tasted like it was made in a heavenly vat by a team of angels. I had the medium sauce - any milder, and I don't think it would have gotten the job done. The sauce was sweet at first but had this awesome, slow-burn spiciness to it. In other words, it was a total foodgasm. Now I'm daydreaming about barbecue sauce. (9.5 points)

The sauce at Tom's was again, technically good. The application was a little sloppy - most of it was concentrated on one side of the sandwich.  It was thick and sweetly spicy, but it didn't make me write "OMG, OMG, OMG" in my notebook. (6 points)

Payne's didn't have much in the way of side items, so I wound up getting a side of slaw. Alas, it was not the best decision I've ever made. Their slaw is runny, neon yellow and loaded with relish. It tasted ok, but the texture and visual effect were, on the whole, unpleasant.  (3.5 points)

At Tom's, I had a side of fries. They were big steak fries. While tasty, they were a little mushy. They were very nicely salted, though. (5.5 points)

The counter at Payne's is staffed by a crew of super friendly women who fix your sandwich while you wait. It took about 3 minutes from the time I placed my order to get my food.  (8 points)

After doing the breakfast brackets, I tend to compare all restaurants with a scary level of efficiency to Bryant's. That's how the service at Tom's is. You're herded through a line to place your order, the woman taking the order picks up a paper bag that's pre-marked with the price of your meal. Then, someone stuffs your order into the bag, yells your number, and you pay at the end of the line. It's intense, but deadly efficient. (8.5 points)

Payne's isn't located in a former church, but there was something about the decor that made me feel like I was at a low budget fellowship hall. It could have been the one mauve wall, the pew-like benches at the tables, or the bouquets of fake flowers sitting forlornly on tables in the corners. The space is huge and open, but it's dark. Also, I'm pretty sure there's no AC. (6 points)

Where Payne's is cavernous, Tom's is borderline claustrophobic. The room where you place your order is galley-like. There's separate room and a porch where you can sit and eat. The space was cozy and loud and full of industrial workers on their lunch breaks. (7 points)

Before you go, Be aware that Payne's is cash only.  My sandwich, slaw and a drink at cost a grand total of $4.60. That's not bad for some serious quality. (8 points)

The Winner: Payne's. Their slaw may be scary, but that sauce is what dreams are made of.

Stay tuned for the second round of the sandwich bracket. Payne's will go against Coleman's, and Central with face off with Captain John's.

You're 'sposed to eat the Payne's sandwich with the slaw ON it. I bet that slaw wasn't too tasty all by itself. Either way - you are right in saying it is the superior sandwich!

payne's vs. tom's in the first round?! crazings.

i reviewed payne's on my blog a few weeks back. i definitely agree that there's some angelic quality about that sauce. the whole thing was pretty magical. http://thecaitlyncosm.blogspot.com/2010/06/there-might-have-been-angel-choir.html

omg headed to Payne's now cause of this!

Been going to Mrs. Payne's for years. IF you want "ambiance" or "a dining experience" go elsewhere. If you want he best pulled/chopped pork anywhere, go to Mrs Payne's..... put the slaw on the sandwich ..

Your BBQ pork sandwich reviews are too cruel. I lived in Memphis in the 80s and now am in Tokyo but am still going through cold BBQ (the equivalent of cold turkey) after nearly 30 years. The only place I've found here that makes a mean white pulled is Hard Rock Cafe. Not coincidentally the first Hard Rock was started in London by a former resident of Jackson Tn. and he's the one that put it on the menu. Hard Rock's success is almost certainly because of the BBQ sandwich plate, which seems similar to the Coleman's version as you describe it. (Anyway, I think the music is way too loud.) I will try to go soon, an hour one way on the subway, and pay the king's ransom of at least $30 including a beer. But at least that's cheaper than a ticket to Memphis!