It's 9 a.m. on Thursday, and Tad Pierson hasn't had any coffee yet, and he wants to know if I mind if he stops for some. He also wants to know if it's cool with me if he tries to track down one a juke joint in North Memphis that a friend told him about.

Tad's offered to take me on one of his American Dream Safari tours around Memphis. The private tours last about three hours and are given in his tan 1955 Cadillac. We're barely five minutes into our cruise through downtown when uses a remote control to turn on "Walking in Memphis". "I can make people cry," he says, grinning. 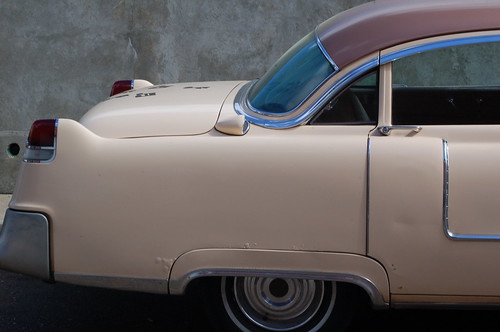 Tad's been showing people around Memphis since 1995. His tours are a mixture of familiar landmarks (Lauderdale Courts, Beale St., Sun Studios) and parts of Memphis that visitors don't often get to see. Our tour winds up Beale, to Lauderdale Courts, through Victorian Village, then deep into North Memphis. The whole time, Tad points out interesting painted signs, amazing clubs that look little scary, and, much to my delight, a tamale truck at a B.P. station that has "DJ Jock Cool Breeze" painted on it. (Apparently, DJ Jock Cool Breeze serves tamales on the weekends, but leaves his truck parked during the week.) 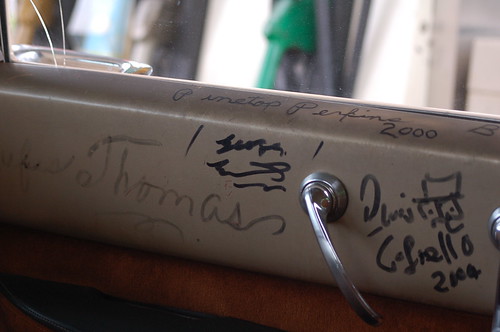 We stop to gas up the Cadillac, a cup of coffee is secured and positioned on the dashboard of the Caddy, and the Juke Joint in question turns out to be a tiny green building with a barbecue grill out front. Tad spends the ride talking about his fondness for hand painted signs, where his favorite soul food buffets are, and how much he likes showing visitors a more complete picture of Memphis.

At the end of the tour, he offers to show me around the Indoor Trailer Park, his office / home / studio (he recycles car tires into works of art) / venue on the edge of downtown. 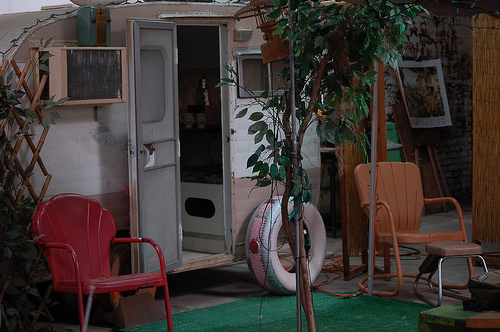 It's a thing of absolute Southern beauty. Tad's collected four trailers and positioned them around a big piece of Astroturf in a giant, sky-lit warehouse. Plastic swans, old TVs, lawn chairs, and homemade "bucket lamps" surround the trailers. A rubber duckie frolics in a small pond. When he turns the twinkle lights on at night, the place takes on a glow so heavenly, you'll probably forget you're inside. 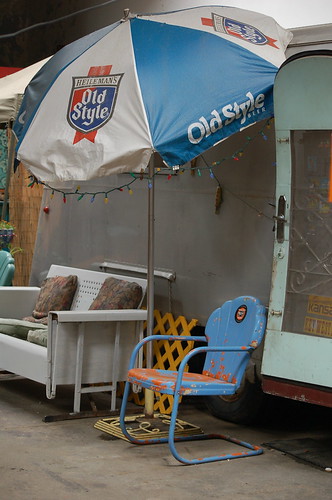 Tad gives tours of Memphis daily. On weekend nights, he gives juke joint tours - he'll take you to his favorite authentic juke joints around town. Each tour can take up to five people, and they're the same price ($200) no matter how many people are in the car. If you'd like to go, you can book through his Web site or by phone. He prefers that you make a reservation in advance, though.

Oh, thanks for the reminder of this very cool enterprise. I've always wanted to do this tour yet think of it only on random occasions. Will have to add to my actual to-do list for a future visit to town!

There are so many wonderful things to see in Memphis!

Taddy is o so most awesome. Had some adventures, yes we did!

His juke-joint tours are the best!  A great way to celebrate birthdays for blues and soul music lovers!

Holly!  The link is broken and I'm having a heckuva time connecting with Tad.  I'd love to send some very special people to me on one of his juke joint tours.  Is he still doing them??  ANy help is greatly appreciated!  Thank you!

Did a three hour tour on sat 28th March 2015, looking at the elvis sites of memphis. Turned into a four and a half homage to the king - No extra charge. Being driven down beale st. in a 55 cadillac with people taking photos totally awesome. Parking outside of graceland to sign the wall one last time, amazing. Tad is easy going, full of local and elvis knowledge. Can't recommend highly enough. If u do one tour of memphis, then this is it.