It takes a surprising amount of people, objects and coordination to make it sound like someone is walking up a flight of creaky old stairs. It works like this: one guy lightly drops one foot on an upturned wooden drawer, quickly, so it sounds like two feet. A woman stands next to him, twisting a water-soaked cork into the neck of a wine bottle as he steps. The director, a guy with a folded copy of the script and big headphones, adjusts a mic on the floor and asks for a little less squeaking. The whole process takes about ten minutes.

That's normal, though. Or, at least it is when you're rehearsing a radio drama. 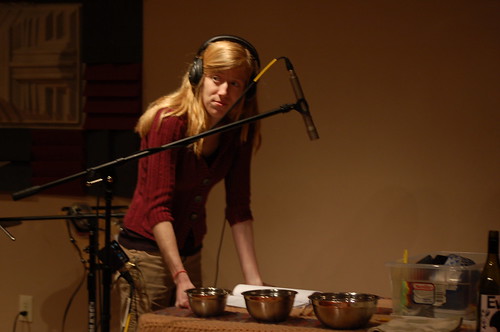 I spent some time Monday night hanging out in the (extremely well-appointed) recording studio at Memphis University School, watching the Chatterbox Audio Theater group rehearse for their next recording.

Chatterbox was founded in Memphis about three years ago. They create radio dramas, much like the ones my grandparents probably listened to before the advent of television.

They adapt short stories into dramas that are read by a rotating cast (since the group's founding, they've used more than 100 actors, a veritable Who's Who of the Memphis theater community). This week, they're taping "Markheim" by Robert Louis Stevenson. 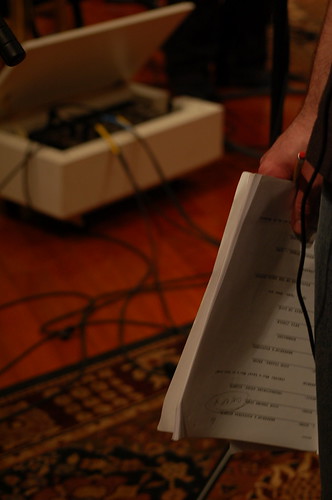 I'm not entirely sure what the plot of "Markheim" is, but I can tell you this much based on the sound effects run through - there's a lot of running, doors get opened, and someone gets stabbed.

"Markheim" only had a cast and crew of five, but I doubt you'll be able to tell when you listen to the final product. But when you listen, know that every sound effect, every breath, and every opened door has been carefully rehearsed. There's no way to fake quality.

All of the Chatterbox Audio Theater shows are available for download via their Web site or iTunes.

Thanks for the visit and the great writeup! We enjoyed having you there.

[...] - Elizabeth from MemphisConnect has some details on the 2010 Memphis Children’s Theater Festival that’s happening at the McCoy Theatre at Rhodes College this weekend. The festival includes kid-friendly performances from Project:Motion, Germantown Community Theatre and Chatterbox Audio Theater. [...]