One of my favorite places to pick up to-go sushi is at the BP station at the corner of Poplar and Ridgeway in East Memphis. 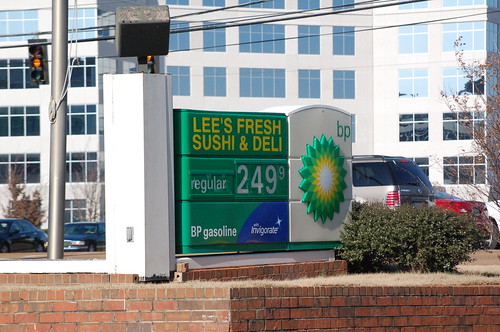 Yes  - you read that right. There's a gas station in East Memphis that sells sushi. Technically, the food operation at this particular gas station is called Lee's Fresh Sushi and Deli, but Memphians know it better as the "sushi gas station".

Before you start worrying about the safety and quality of any sushi purchased from a gas station, know that there's no reason to. The goods are made fresh daily in the store by a sushi chef. 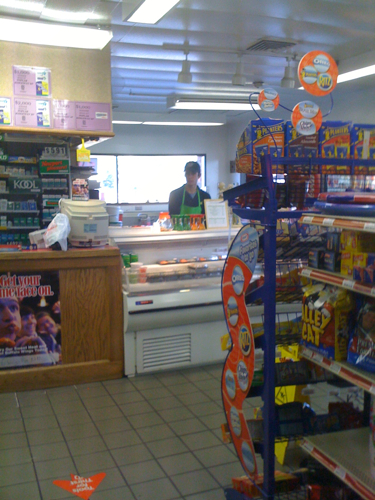 The sushi chef at Memphis's only sushi gas station

I picked up a package of California rolls, a pair of paper-wrapped chopsticks and a bottle of lemonade Vitamin water and headed home for a taste test.

Lee's had several other kinds of sushi - Philadelphia rolls, spicy tuna rolls, nigiri and eel rolls were all for sale (and all under $10).

I've always wondered about the sushi there. Thanks for the review, I'll be sure try it for sure now.

Hey Kerry, I laughed when I saw your tweet cause I don't know how many people have found that hard to believe. My office was within a block & I'd go by now & then and pick some up. My fave was the spicy tuna but the crispy shrimp would good too! Far better than fast food from a chain! jp PS -- it used to be called Citgo sushi before it changed alliances...

I grew up right near that place and frequented it all the time. I never really gave the gas station thing a second thought until I told friends at college. Great, cheap sushi fix.

The words "fresh daily" do not apply to sushi.  Fresh sushi means it was made after you ordered it, and minutes (or seconds) before you eat it.  Try some sushi at Edo or Sakura (Germantown), then compare what you got at the gas station. Yes, I've tried it.  I asked the guy for a California roll.  He pointed to some that were already made, and I asked for a fresh one.  He glared at me and made one.  Even though it was made in front of me, he apparently keeps his rice extra gooey so it will have a longer shelf life without drying out. If you LIKE the rice gooey and with indiscernable grains, this is the place for you.