Backbeat's Got Mojo to Spare

Backbeat's Got Mojo to Spare 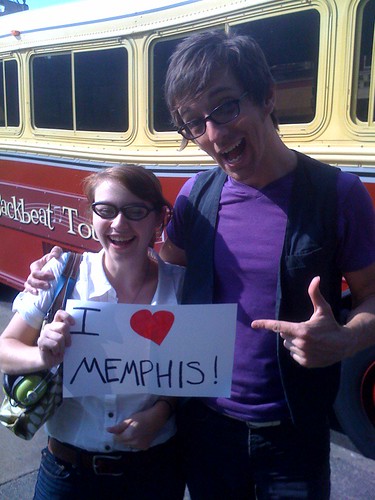 I was going to take a picture of my friend Memphis Jones holding my I Love Memphis sign, but he felt a little weird holding a sign with his name on it. So I held it for him (which was totally fine - I love people named Memphis, too).

Memphis Jones was kind enough to pose with the sign and I after he gave one of his Memphis Mojo Tours for Backbeat Tours. Backbeat tours leave from Beale Street on a somewhat moody retro bus named Miss Clawdy.

The Memphis Mojo tour is half bus tour, half tent revival. All of the guides are local musicians who play the guitar and lead the entire bus in Memphis music sing-a-longs. If you're not the singing kind, everyone is armed with an egg-shaped shaker or a tambourine. 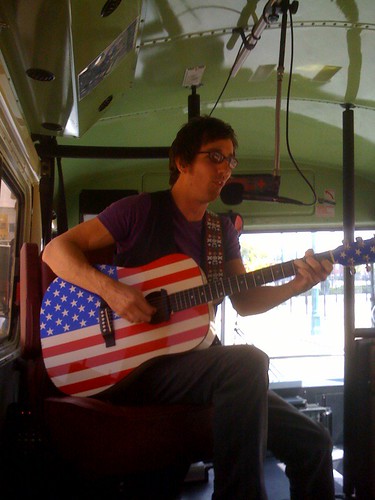 So, if you're the sort of person that doesn't like audience participation (you know who you are), this might not be the tour for you.

The bus winds through downtown Memphis to Lauderdale Courts (where Elvis lived as a boy), to Sun Studios, Soulsville and other great Memphis landmarks (like the Wonderbread bakery - breathe deep).

The Mojo tours leave daily at 2:30. Backbeat also has historical tours, ghost tours and Graceland tours. You have to purchase tickets in advance because the tours fill up quickly.

[...] (the former site of Elvis’ karate dojo, now a club). You can also take one of the excellent Backbeat tours – they ride you around town in vintage style while they tell you (and sing about) [...]

[…] yet, and like musical entertainment, this tour might be good for you. If you haven’t taken a Backbeat Tour, know that you’ll be riding a vintage bus with a talented musician as your singing tour […]