Despite having been a lot of things over the years (empty, storage, inexplicably a scuba gear shop), the actual studio at Sun Studio is still in its original condition.

For some reason, it's normal in Memphis to tear down the original landmark and build a replica in its place. Because of that, we're very lucky that Sun Studios is still all original.

The angular ceiling and light fixtures are the same ones that Sam Phillips installed in the 1950's. There's a small, perfectly circular gouge in the floor from years of upright basses.  Tape on the floor marks the spots where Elvis and his band stood to record.

I went on the Sun Studio tour last Friday, and the place was full. Tour buses were parked outside, Miss Lisa was busy making milkshakes and the local musicians that work the counter were up to their elbows in ticket stubs.

That's one of the best things about Sun - most of the people that work there as tour guides are part of the local music scene. Everyone that I met was just so completely excited about Memphis and Memphis music.

If you're from Memphis, there's still plenty to learn. I had no idea that a dollar folded between the strings and the frets made the brushed snare sound on Johnny Cash's "Walk the Line". 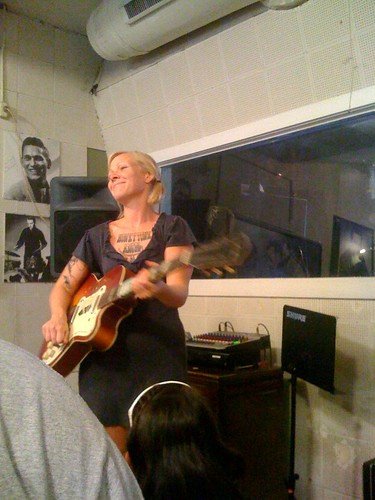 Also, you should know that this isn't your mama's rock'n'roll tour. Visitors are encouraged to sing along, dance, play air guitar, etc. whenever the mood strikes them. I managed  to keep it in check, but several people on my tour couldn't resist singing along to "That's Alright Mama".

That seems to be a common theme at Memphis museums - there's a lot of encouragement for singing and dancing.

There needs to be RHYTHM ACES photos on the wall as well.

I'm still around and still reading and commenting on I LOVE MEMPHIS. SUN STUDIO is Heart of Medical District and All must come to see.