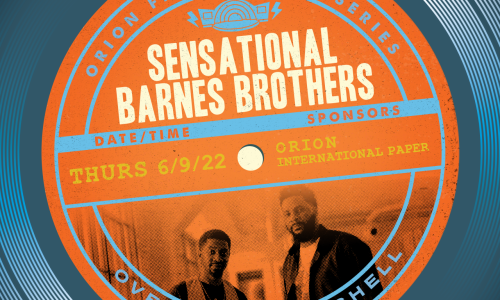 The Sensational Barnes Brothers are a melting pot of the old and the new. As Pop Matters states, “The brothers run through a spectrum of moods and modes in their gospel soul, often bridging the gap between, say, the Soul Stirrers and Stax, all the while keeping a local flavor.” The brothers are able to dive deep into their roots, creating a sound that reflects the music of their history, all the while drawing in a modern-day audience.

Family was and is a huge part of the creation of The Sensational Barnes Brothers. Their father Calvin “Duke” Barnes made his way through the world with his beloved wife Deborah who was the daughter of Rev. James L. Gleese, who founded the Beale Street Mission for Blacks/Negroes. Before love, marriage and children demanded that she leave the touring life behind, Deborah was a Raelette, one of the background singers for the genius of soul, Ray Charles.

“We performed a lot,” recalls Courtney. “In our performances, my mom and dad would do the first section. They would sing, and we would be the background. Then in the next set it flipped over to where the children would do our thing, and that would be the Barnes Family concert.”

The family carried on as musical collaborators for years and still play and sing together, even with their father gone. In 2015, the family released an album, Family Tree before Chris and Courtney began The Sensational Barnes Brothers as a duo.

The Sensational Barnes Brothers are featured on vocalists Don Bryant’s Grammy nominated album Don't Give Up on Love, lead singer of The Black Keys, Dan Auerbach, on his newest solo album, and you can expect to hear them on the soon to be released album from Latin Grammy nominated Making Movies.