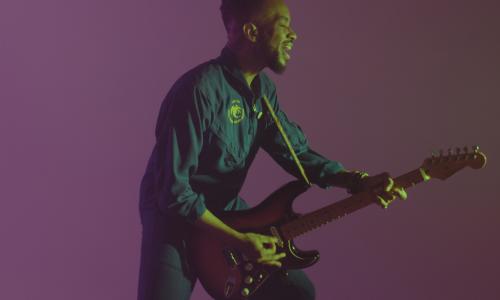 Born in Nashville, Tennessee, Spree Wilson’s approach to music has always been driven by his boundless creativity and vision. The singer-songwriter began his musical journey at home, with a father who sang and toured in a doo-wop group called The Blue Shirts and a mother who kept artists like Elton John, Fleetwood Mac, Minnie Ripperton, and Whitney Houston in constant rotation. Those early influences would become his musical foundation, the bedrock for a career that would lead to him meeting and working with two giants of popular music: his mentor Dallas Austin and legendary rapper/producer Q-Tip.

While attending Clark University in Atlanta, Georgia, Spree met Austin, who was immediately impressed by the young man’s guitar skills and offered him an internship at his famous studio, Dart. Spree’s hard work and dedication to learning the music industry served notice that there was more to the multi-talented young artist than just raw talent— there was the focus and drive to maximize his potential and realize his ambitions. Austin would soon offer him a recording contract, which Spree turned down in order to pursue his career in New York City.

After selling his car and purchasing a one-way ticket to the City of Lights, Spree arrived in NYC with just his suitcase and guitar. He found himself homeless and living in Penn Station for several weeks. A mutual friend eventually introduced him to Q-Tip, who was impressed by Spree’s songwriting. Q-tip would ultimately help land the upstart a major label deal with Jive Records. During his time with Jive, Spree began working on his album — writing songs constantly and ultimately landing a publishing deal with Universal Music Group.

Since then, Spree has co-written Afrojack’s single “The Spark,” which he is also featured on as an artist. “The Spark” has been A-listed on BBC’s radio 1. In addition, he has co-written “Sin City” on Good Music compilation album Cruel Summer with Teyana Taylor. The album went #1 on the US Top R&B/Hip Hop Albums, US Top Rap Albums, and #2 on US Billboard 200. He has collaborated with noteworthy producers such as Q-Tip, Novel, No ID, Jim Jonsin, Infamous, Malay, Robin Hannibal (of Rhye), Frequency, and Mark Maxwell.

Even with his successes, Spree remains as creatively progressive as ever and has never limited himself to one specific style or genre of music. His upbringing in Nashville exposed him to everything from George Jones to George Harrison to George Benson. He’s as much hip-hop as he is pop, a rock star rebel with the spirit of a b-boy. This love of all musical styles is what drives Spree’s ever-broadening sound, musicianship, songwriting, and style.