ONE NIGHT ONLY: Don Bryant & The Bo-Keys Live with Chamber Orchestra 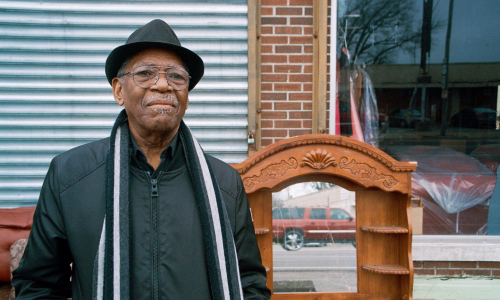 Hear Don Bryant & The Bo-Keys in a very special, one-night-only performance with members of the Memphis Symphony Orchestra. The orchestra will also be performing music from Craig Brewer’s 2019 film Dolemite Is My Name (music written by Scott Bomar of the Bo-Keys).

You know that old song that O. V. Wright did so well in 1971 that no one can ever do that song again — “Nickel and a Nail”? O. V. Wright has held tight to that song and rightfully so. But not no mo. Not to take anything from O.V.— but after nearly half a century, now you gotta step aside. Don Bryant is here.

Though it ain’t like he just showed up. The roots of this record are in the Memphis church, where Don Bryant began singing when he was 5. He joined his father’s family vocal group, then formed a gospel quartet for a high school radio gig. Broadcasting broadened the audience and they went secular, singing pop at WLOK on Dick “Cane” Cole’s popular show. After parting with the DJ, they took a very real step toward careers when, as the Four Kings, they began fronting Willie Mitchell’s band.

Willie Mitchell led the swingingest, groovin’est band in the Memphis-Mississippi-Arkansas area — the American music floodplain. Willie’s band was known for instrumental records, but when they’d play at Danny’s in West Memphis, Don’s group fronted them. But the group broke up and Willie, who was touring concert venues and dance halls, needed a vocalist who could play with his supple, slinky funky beats, and anointed Don Bryant as his leading man.

Don could also write songs. He was still in his teens when, in 1960, Willie was producing the 5 Royales, and Don handed him “I Got To Know.” The 5 Royales put it on wax. Don was hot in the spotlight and in the writer’s room.

As Willie Mitchell carved out his place at Hi Records, Don was close by. Don cut songs at Hi under the Four Kings moniker (“That Driving Beat”) and as a solo artist (“Don’t Turn Your Back On Me”). He wrote material for other Hi artists, including Janet & the Jays and Norman West. In 1969, still in the age of 7” singles, Don was popular enough to release an album — though the big breakout hit stayed elusive.

Around 1970, Willie put Don with the Hi label’s newest act, Ann Peebles, who burst on the scene with “Part Time Love.” Don looked at this slight young lady and penned “99 Lbs” for her: “You wouldn’t know what I’m talking ’bout/ If you never had a love like this/… 99 lbs of natural born goodness/99 lbs of soul.” The relationship warmed, they co-wrote the hit “I Can’t Stand the Rain” in 1973 and were married the following year. Ann’s performing career continued, as did Don’s writing, and they began raising a family. Occasionally, Don returned to the microphone, dueting with his wife, sometimes releasing gospel material. Always, he continued to write songs.

And all the while, that voice was maturing, mellowing, until these recordings that find him, at age 74, in peak form and taking O. V.’s song. The band is a mix of lifelong cohorts and upstart stalwarts. They understand where he’s been and where he wants to go, making his song “How Do I Get There,” a rhetorical question, because they have clearly found the way. –Robert Gordon, Memphis, 2017

Through three critically acclaimed albums, as well as international appearances at major festivals and clubs, the Bo-Keys have kept the spirit of classic Memphis music alive while also writing a vital new chapter for the sound and style that’s etched into the fiber of American consciousness. The Bo-Keys performed on the score for Hustle & Flow and appear in the film Soul Men, performing on-screen with stars Samuel L. Jackson and Bernie Mac. They also appear on three songs Bomar produced for the film’s soundtrack, including“Soul Music” by Anthony Hamilton, which was nominated for a Grammy in2010. The Bo-Keys can also be heard performing the song, “Kick It” in the film and soundtrack for the Paramount animated feature, Barnyard. The Bo-Keys have also had songs featured in 2013 De Niro/Stallone comedy Grudge Match. the Showtime Series TheChi, AMC’s Dietland, the ABC TV series Scandal, and the CBS TV series Scorpion.

Scott Bomar is a Memphis-based musician, Emmy Award-winning film/TV composer and producer, songwriter, and engineer of multiple Grammy-winning and nominated recordings. Projects include the films Dolemite is My Name, Hustle & Flow, Black Snake Moan, Mississippi Grind, and Soul Men. Bomar produced and engineered Cyndi Lauper’s Grammy-nominated album Memphis Blues at his Electraphonic Recording Studio and co-wrote the song, “The House Always Wins” on William Bell’s 2016 Grammy-winning album, This is Where I Live.

In high school, he began performing with groups at Memphis-area clubs and formed the group Impala. With their ‘60s instrumental sound, the group toured and released five albums. Impala’s version of the Henry Mancini theme “Experiment in Terror” is featured in George Clooney’s directorial debut, Confessions of a Dangerous Mind. In 2018, Impala released a new album, In the Late Hours, which was described by Rolling Stone as “…combines surf-guitar nostalgia with a minor-key, spy-movie-worthy riffage.”

In 2005, Bomar composed the score for Craig Brewer’s award-winning film Hustle & Flow, for which Bomar has received much critical acclaim for his Memphis soul meets hip hop score. Bomar returned in 2006 to collaborate with the filmmakers of Hustle & Flow as Executive Music Producer and composer of the film Black Snake Moan. He worked with film’s stars Samuel L. Jackson and Christina Ricci in the studio to record songs for the film, which are performed on-screen. He also composed the original score utilizing musicians harmonica legend Charlie Musselwhite and Rolling Stones and Ry Cooder sideman, Jim Dickinson.

Bomar is also the leader of The Bo-Keys, a Memphis soul group featuring legendary Stax and Hi Records session players.