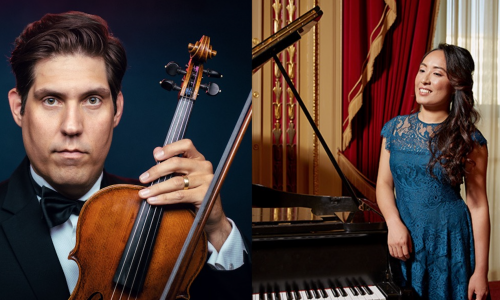 Crosstown Arts presents the Dubois-Yao Duo for a performance titled Adoration – Music of The Americas.

Featuring works for viola and piano by Florence Price, Samuel Coleridge Taylor, Astor Piazzolla, and more. The program features works from Dubois-Yao Duo’s new album “Adoration – Music of the Americas,” which will be released on October 20 on Spice Classical Records, Boston.

Praised for having such a powerful and yet welcoming, warm sound, Brazilian violist Amaro Dubois has approached his unique playing in many areas of the classical music industry by placing an emphasis on expanding the repertoire for the viola through collaborative projects in Brazil and North America. An avid performer, Amaro has performed in several professional ensembles, including the Chattanooga Symphony Orchestra, the Tuscaloosa Symphony Orchestra, the Paducah Symphony Orchestra, the Mobile Symphony Orchestra, the Pensacola Symphony Orchestra, as well as other orchestras and chamber groups. Additionally, Amaro was awarded the Iris Orchestra Fellowship under the guidance and mentorship of music director and conductor Michael Stern for the ’19-’21 seasons. He is a recording artist for Breve Classics Records where he debuted his first album, Preludes by Bach, a complete album of preludes from the Cello Suites of J.S. Bach, as well as Spice Records where he will be debuting his latest album, Adoration. He recently founded the Yao-Dubois Duo with the marvelous collaborative pianist Tingting Yao. Their mission is to share compositions by underrepresented composers, including African American, Latin American, and women composers. Their first album, Adoration, is scheduled to be released in mid-October 2021 and features a diverse program of composers, including Florence Price, Guerra Peixe, Villa-Lobos, and Rebecca Clarke, among other wonderful artists.

While in the U.K., Tingting was flourishing as a collaborative pianist when studying at Birmingham Conservatoire. Competition awards as an accompanist include Ambache Prize Performance of Music by Women Composers, Delia Hall Accompanist Prize for Pianists, Andrew Downes Performance Prize, Winfred Micklam Prize, BC String Prize, and BC Percussion Prize. Soloist awards include Beryl Chempin Beethoven Prize for Pianists and Renna Kellaway Piano Recital Prize.