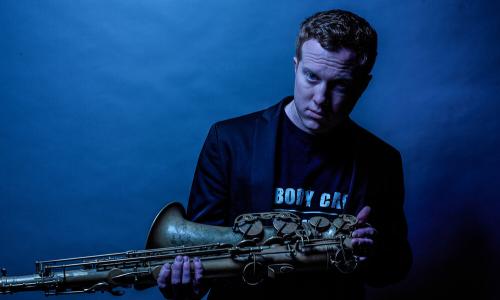 Described by critic Howard Reich of The Chicago-Tribune as “a player for whom the word ‘prodigious’ was coined”, by Peter Hum of the Ottawa Citizen as “a saxophonist who brings Donny McCaslin and Mark Turner to mind”, and by Nate Chinen of The New York Times as “the sort of jazz musician who gets flagged early on as a promising talent and then hustles to meet every requirement for success”, Larson has garnered numerous awards that distinguish him as one of the most promising artists of his generation. As a student, Larson was a member of virtually every national program dedicated to showcasing excellence in young jazz talent including The Grammy Band, Next Generation Jazz Orchestra, Betty Carter Jazz Ahead, YoungArts Jazz Fellows, Telluride Student All-Stars, and Jazz Band of America, among others. Upon graduating from University High School in 2008, Adam moved to New York City to pursue his BM and MM in Jazz Performance on full scholarship from The Manhattan School, where he graduated with honors as a Master’s student as the recipient of the William H. Borden Award for Outstanding performance in Jazz in 2014.

Larson has released five albums: one for Ropeadope Records, two under the Inner Circle Music label and two produced independently. Larson’s most recent recording, “Second City,” received a four-star rating from Downbeat Magazine, was listed as one of the best releases of 2017 in both Downbeat and Jazziz Magazine, and was prominently featured in several publications. Larson’s fifth record “Listen With Your Eyes,” was released on Ropeadope Records on September 6th, 2019. Larson keeps an active schedule with his own groups and as a sideman, having performed at several venues across the U.S., including The Jazz Standard, Birdland, The 55 Bar, The Jazz Gallery, The Blue Note, The Village Vanguard, Smalls, Jazz at The Bistro, The Jazz Estate, The Jazz Showcase, and several others.

Larson continues to perform in NYC with some of the greatest musicians in the genre.

As a guest artist, Larson has been invited to present masterclasses on music business, improvisation, and composition at more than fifty universities across the globe.