How to Improve Central BBQ's Nachos

How to Improve Central BBQ's Nachos

As long as I've ordered the barbecue nachos at Central BBQ, I've loved them. Over the years, I've learned about not one but two ways to improve the already near-perfect barbecue nachos served at Central's multiple Memphis locations. Your love for the delicious dish will grow larger than the red plastic basket it's served in! 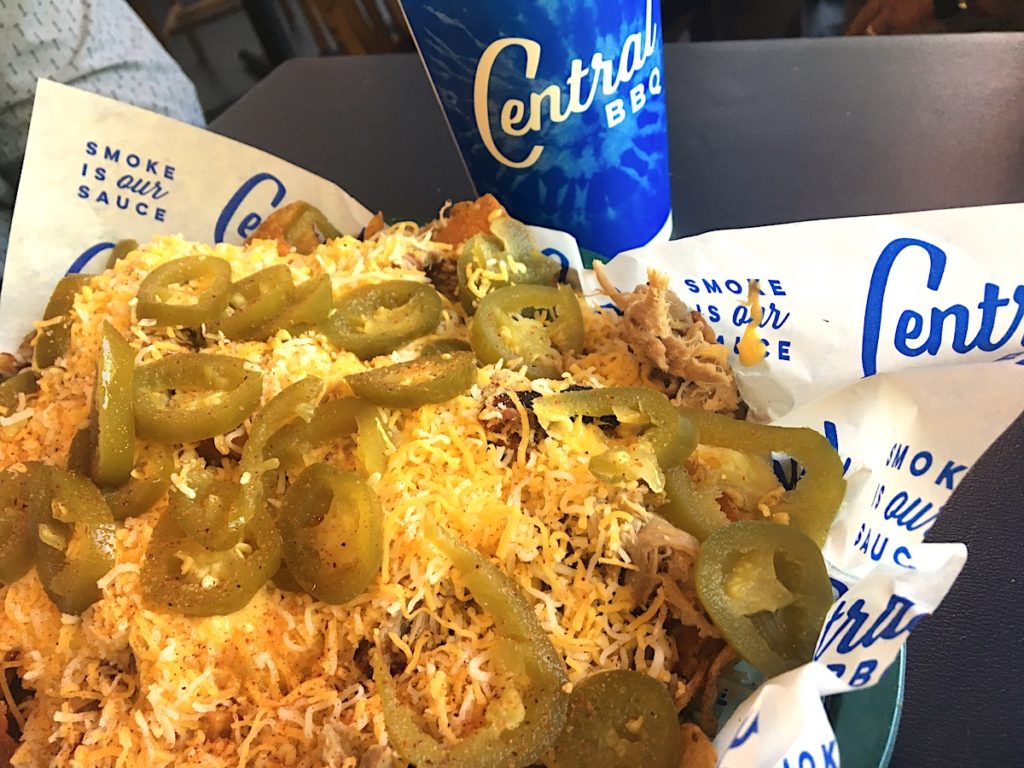 While tortilla chips are a perfectly fine base for a mess of pulled pork, cheese and sauce, they're not the best way. The best way is to order your nachos on Central's house-made potato chips. It doesn't cost anything extra and it makes all of the difference.

The other modification arguably makes transforms the nachos into something else entirely: loaded fries. There may be an extra charge for this, but why not add a tried-and-true vehicle for cheese we already know and love? The nachos on fries are pictured at the top of this post.

One of the Best Places for Memphis Barbecue

Even though you can now find Central BBQ's delicious smoked pork, chicken, and wings at a location in Nashville, it's a Memphis BBQ original. It's a Memphis must-eat, really. If you're looking for locals' favorite barbecue in Memphis, Central should be on your list. 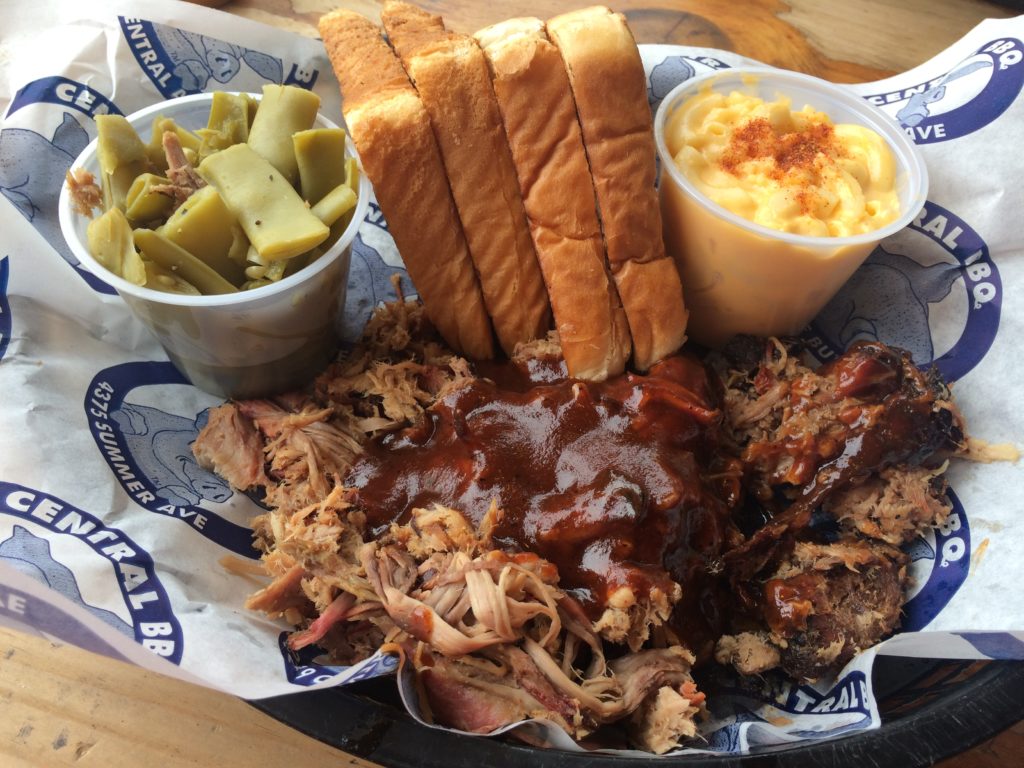 Back To The Nachos

Look, I'm not here to tell you what to do, but if you only care about your chips as an efficient pork and cheese delivery system, stick with the tortilla. If you're the kind of person who wants something more, something spicier and crunchier that will add an extra layer of flavor, upgrade to the house-made chips or even the fries. 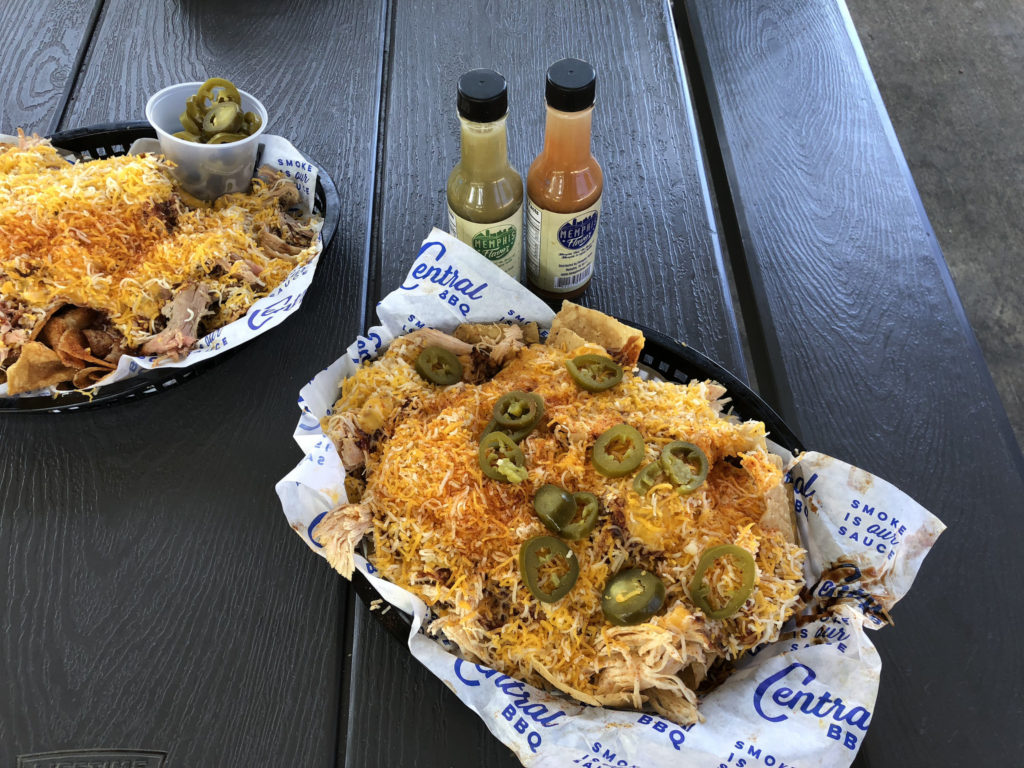 You can find the nachos at any of Central BBQ's locations, but why not try the one downtown:

i always order them with a side of slaw, and then garnish. AMAZING.

I get it with the house chips occasionally but it's usually waaay too salty to finish.  I'd stick with the corn chips.

The simplest news is the biggest. Tonight's dinner plans made!

I get them with half and half chips. It's the best of both worlds.

My hubby gets them with fries instead. As debaucherous as it is, I can't resist stealing a few. Good thing I can ease my guilt with the amazing portabella sandwich.

You are missing out if you're not getting them on fries!

Am I the only one who feels the amount of cheese on the nachos overwhelms all the other deliciousness on the plate?

A cool idea that you can try with the BBQ Nachos is instead ordering the BBQ with chips, replace the chips with fries and it tastes soooo good.

Make a vegetarian option... add beans ... I always recommend the nachos to our guests who visit and plan on dining at Central... they're truly a fan fav!

yum! I know they have a portobello mushroom, too.

I haven’t had them in a bit, but the last time I subbed fries there wasn’t an upcharge, unless your considering health insurance premiums.

Awesome! Jason R, this made me laugh.