Where To Eat On Beale Street

Where To Eat On Beale Street

As the most famous street in Memphis and one of the most iconic places in the country, Beale Street gets a lot of love for its music and its drinks.

Here are eight places to eat on Beale Street, as recommend by our intrepid I Love Memphis Twitter followers. They're in no particular order. Check out the entire thread of recommendation and opinions here.

Come for the live blues music, stay for the food. Pull apart some BBQ ribs slathered in B.B. King's house sauce, the King's Meatloaf, and mac 'n' cheese. The menu offers a sampling of your standard Southern and BBQ favorites, so there's something for every body. 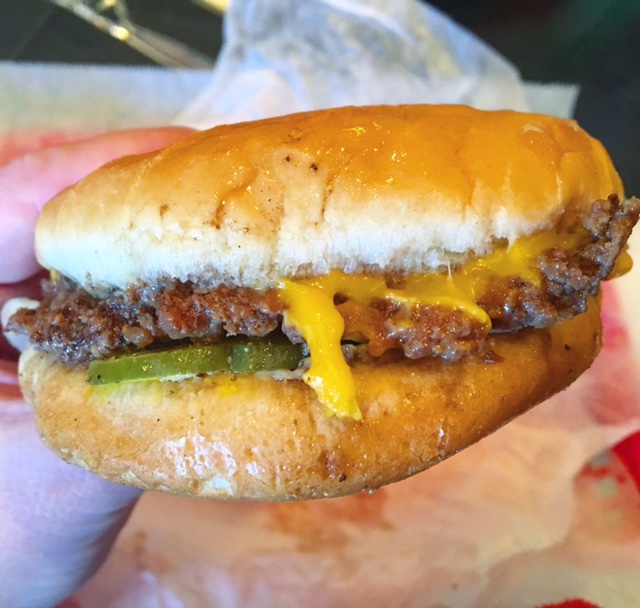 Picture this: you've tried all the drinks on Beale Street, from a Big Ass Beer to a Silky's Diver to a Call-A-Cab at Silky's. You're going to need something to eat, and it better be greasy and filling. Dyer's fries their burgers in carefully guarded 100-year-old-grease and they stay open late. Dyers: We'll Leave The Grease On For Ya. Read more.

The vast majority of our follower suggestions were for Blues City Cafe. It seems like their claim to serving the "Best Meal on Beale" is worth checking out! The recommendations are many, but the top choices seem to be the Memphis barbecue ribs, the gumbo fries, and the Delta-style tamales. What are gumbo fries? Crispy, piping hot steak-cut fries topped with a big pour of Blues City's seafood gumbo. 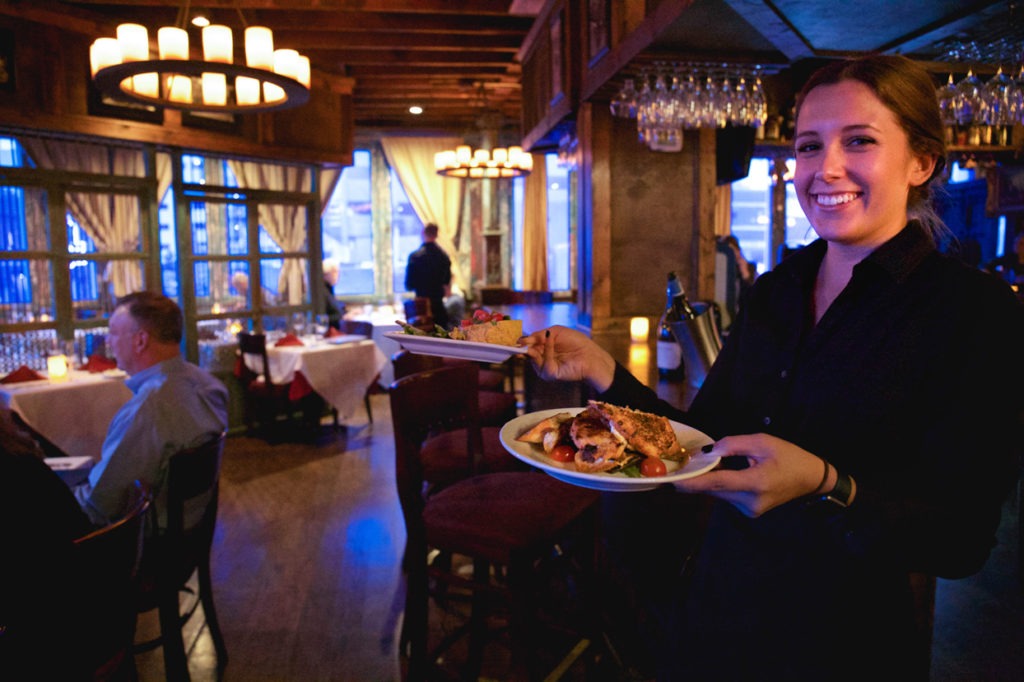 If you're looking for speakeasy-style fine dining on Beale Street (oddly specific, I know) then Itta Bean is a top choice, not just for this street, but for the city. Dig in to the Southern and Cajun-inspired menu while you enjoy the romantic atmosphere. If you're having trouble finding Itta Bena, just look for the secret red door next to B.B. King's—this Memphis date night restaurant is located up a flight of stairs on top of the blues club.

Rum Boogie, one of my personal favorites for live music, has also earned local fans for their Gator Gumbo and their  daily lunch special. The latter is a meat-and-three plate with an entree that changes daily, including turkey and dressing on Tuesdays. They have fried catfish and BBQ daily, too. Rum Boogie was also a filming location for the NBC show Bluff City Law!

2020 Update: At time of publication, Miss Polly's is temporarily closed. Miss Polly's will reopen in October for Saturday and Sunday service only, from 11 a.m. to 9 p.m.

This cozy restaurant on Beale Street is more of a daytime hangout than most of the others for a good reason. That reason is: chicken 'n' waffles for breakfast or brunch or lunch on Beale Street. You'll find Miss Polly's on most "best fried chicken in Memphis" lists. Fried green tomatoes and turnip greens are also favorites.

If you're looking for something hearty and heartwarming, King's Palace Cafe touts their "Championship Gumbo" as a must-try, and the people seem to agree on that and recommend the pasta dishes too. I also appreciate their gated side patio (and walk-up bar) when the weather's nice and the music is flowing. 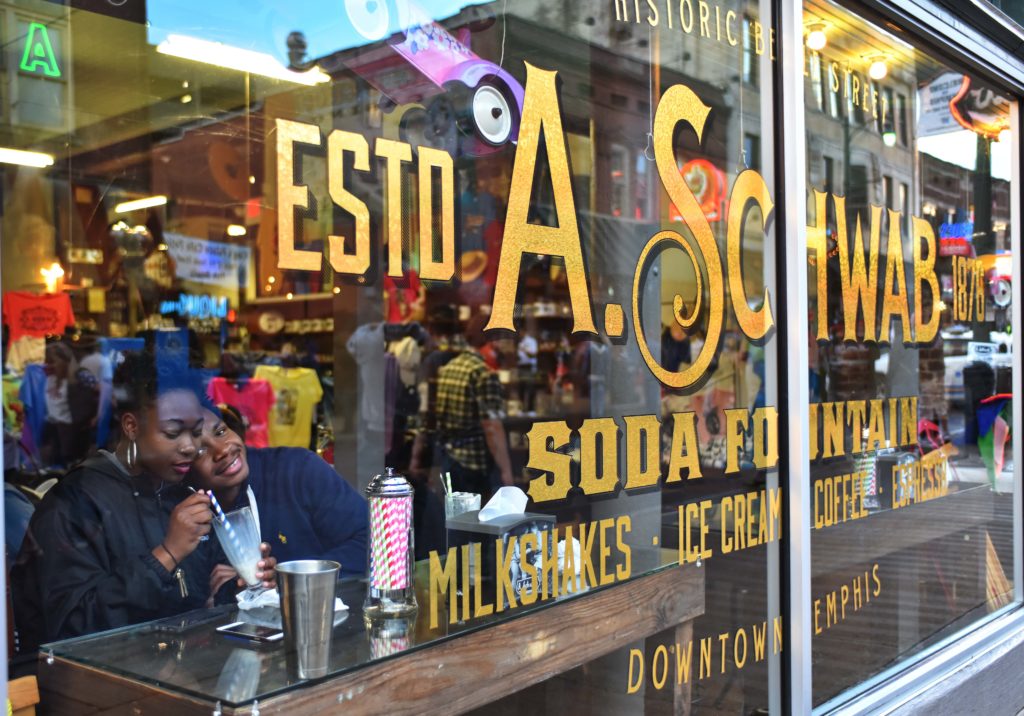 Now it's time for dessert! A. Schwab is the oldest operating business on Beale. On one side, you'll find an old fashioned general store selling everything under the sun. On the other side, you'll find an adorable old fashioned soda fountain. A. Schwab is only open during the day, but that makes it the perfect family-friendly thing to do with kids on Beale Street. Order up a banana split, hot fudge sundae, or a frothy milkshake.

Thank you so much for sharing this well kept secret. I am going to add this to our trip down in July, we always like to try something new:) I will have to look for a website and I hope I find one and a menu!

Thanks for this! I am always looking for a great place to try out, and you never disappoint. You rock!

We live in Arkansas but we party in Memphis. You never disappoint! Now we don't do a thing on the weekends until we see what you suggest first. This place is right up our alley and will be a must see for us. You rock!! Thanks for I heart Memphis!

It is one of the best restaurants in Memphis! I love it! I don't get to go there often enough.

Had the duck and waffles.. I'm a sucker for a weird menu item, it was great, but tisk, tisk, my martini had ice in it! LOL, bring a flashlight or an iPhone to read the menu.

[...] write-ups about them in print and online:Â East Memphis Moms, Commercial Appeal, Eat Local Memphis, I Love Memphis, Memphis Magazine, and even Southern Living! Â Or make a reservation at Open [...]

What is the name of the best…

What is the name of the best Hotels near Beale Street?

Hi Linda! Here's a resource that will give you some options and you can pick a price range, too! Hyatt Centric is the brand new one on Beale but there are a ton of options in the area: https://www.memphistravel.com/memphis-hotels?f%5B0%5D=profile-regions%3A12766&f%5B1%5D=profilecategories%3A12101