Ride Your Bike To Pancho's In West Memphis

Ride Your Bike To Pancho's In West Memphis

Ed. Note: The number one thing I hear when we talk about the Big River Crossing is not the stunning views of the Mississippi. It's not the awesome architecture. The most popular comment on the topic is always something to do with Pancho's Tex-Mex restaurant in West Memphis, Arkansas.  I don't know if it's because Pancho's is the first thing Memphians think of when they think of West Memphis, or if we just are obsessed with the cheese dip that much, but it's true. "Can you ride your bike to Pancho's?" I hear every time I mention the bike/ped bridge. Yes, Memphis, you can. And contributor Stacey did it (twice) to prove it. Here's her take on this great way to enjoy the BRC and our neighbors to the west.

Riding a bike to Pancho's in West Memphis has basically become a bucket list kind of thing, and I’m here to tell you how to do it. On my first excursion, I left from my Cooper Young abode, and it ended up being a 20+ mile ride. On my second, smarter ride, my friend, Ashley (who has a bike rack), and I parked over by Loflin Yard. This made the round trip closer to 11 miles. From Loflin Yard to Pancho’s, I’d say it’s about 30 minutes to an hour, depending on your speed and how often you stop to take it all in. Pancho’s doesn’t open until 11 a.m., so there ain’t no use in leaving too early. 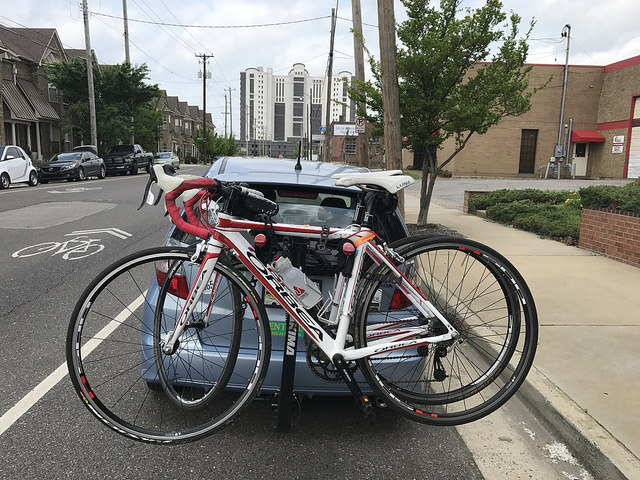 Both times I rode my road bike. I think it can be done on a cruiser or any kind of bike, but if you have a choice, I’d take a hybrid or a road bike. Also, don’t forget to take a bike lock for when you get there. And before you leave your house, look in the mirror—are you going to want to walk into a restaurant in your current outfit? It is definitely not uncommon to see folks in bike shorts and tank tops at the West Memphis Pancho’s; some of them even rode their bikes there. If you want to be fancy, throw a clean t-shirt in your pack. And lastly, a quick word on the rules of the road for bikers. Ride with traffic and obey all stop signs, red lights, etc. On the bridge, if you are passing pedestrians or other bikers, do so on the left and holler a kindly and clear, “On your left” a moment or two before you do it. Ok, let’s go! 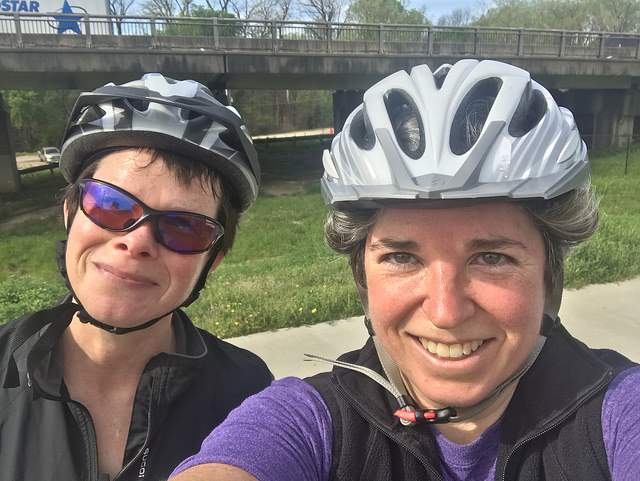 From Loflin Yard, it’s just a hop, skip, and a jump over Riverside Drive to the entrance of the Big River Crossing. The ride over the bridge is glorious. Depending on the time of day and what day it is, there could be a lot of adults, children and their pets enjoying the view, so don’t be in a hurry. 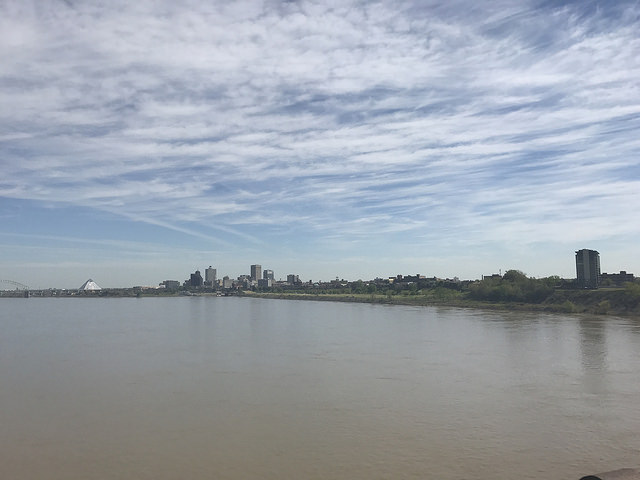 The bridge itself is about a mile in length. On the West Memphis side there is a nice plaza where you can rest, enjoy the view, and wonder about the decision makers who sold a very prominent billboard to Coyote Ugly. There are also porta-potties. 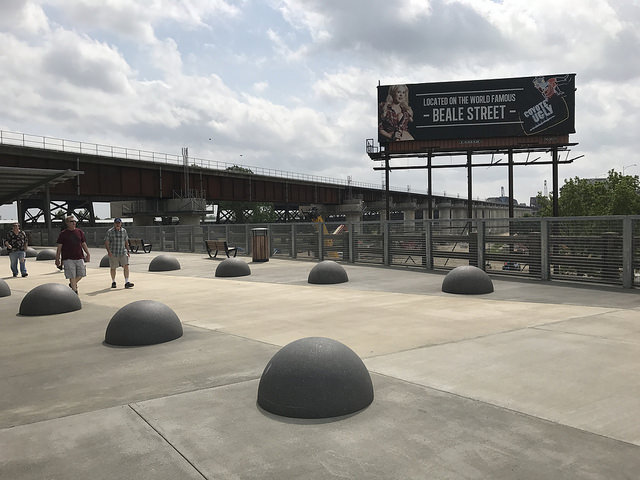 To continue to the Big River Crossing (BRC) trail, you just head down the winding path. I’ll admit that on my first trip, this winding path seemed a little steep and I wondered if I’d ever get back up it. I did, and you will too. The path takes you down to the parking lot and then to a lovely protected pathway. Just follow the signs. After a half mile or so, the path ends, you’ll see another billboard—this one for Lawler’s Fireworks, and then you’ll be on a regular road for about a mile. I’ve never once seen a car on the road, so don’t panic. It’s lightly, if at all, trafficked. 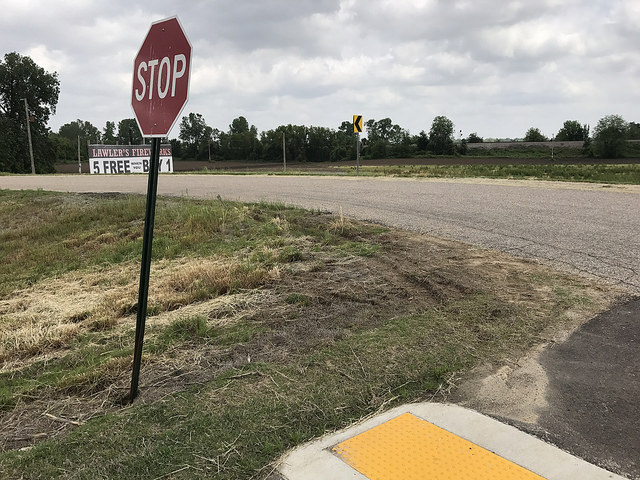 The road has some lovely vistas mixed with some weird unkempt areas. There are fields with flowers (buttercups, primrose, red clover, etc.), water features, turtles, and weird things like one of Pee Wee Herman’s old shoes. 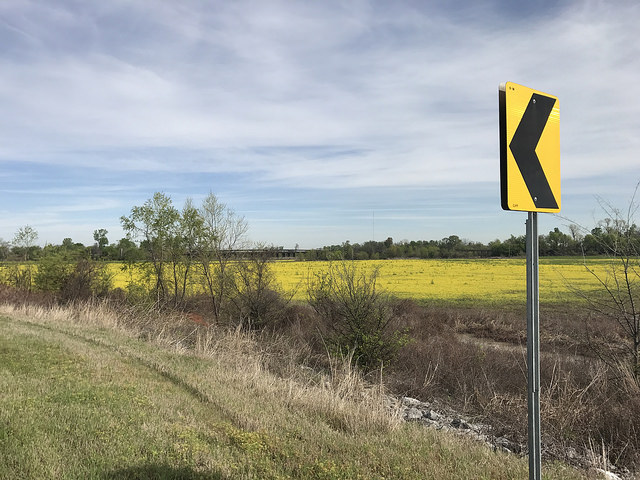 Watch for the signs, and make your way back onto the BRC trail that follows along the Interstate. Once here, you don’t have to do much thinking as it will take you all the way. At some point you go under the expressway, and then you’ll see a lovely solar powered covering. 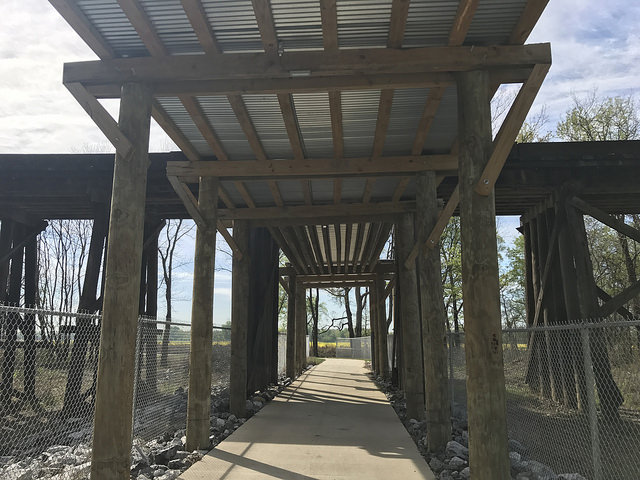 The last little bit, a mile or two, goes along Broadway, which is a pretty heavily traveled road in West Memphis. The path, which is about the width of the Shelby Farms Greenline, is separate and still feels safe. There are several businesses along here, including a couple of motels, should you decide to extend your stay in West Memphis. 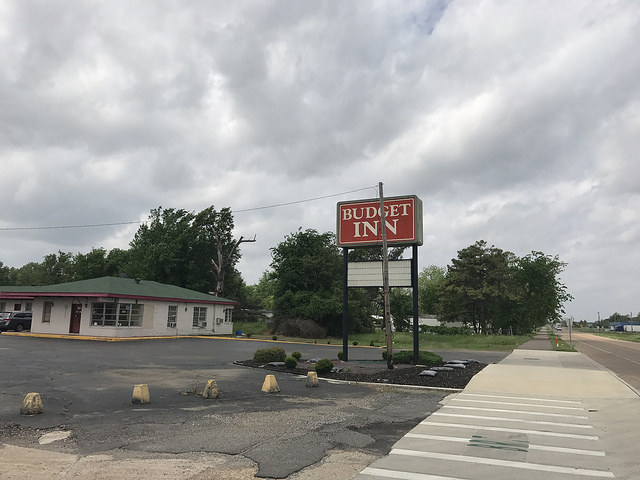 The BRC ends with another lovely plaza and official gateway, which just happens to be directly across the street from Pancho’s. Crossing Broadway is probably the most treacherous part of the ride, depending on traffic. 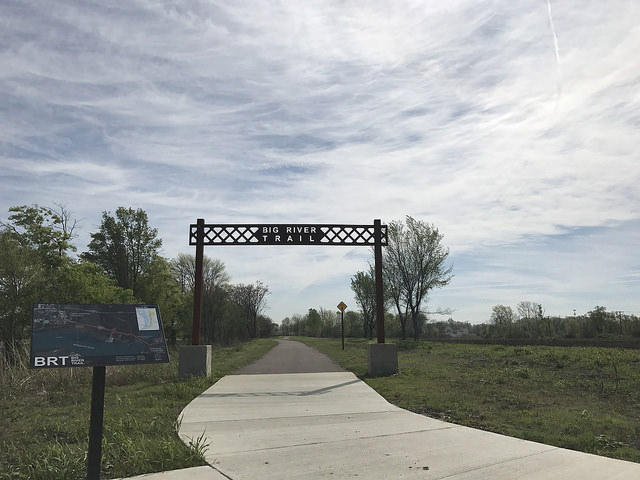 If you’ve never been to the Pancho’s in West Memphis, you are in for a real treat. They have plenty of bike parking, and it’s large enough that you could bring your 100 closest friends. I love the murals, brickwork, decorations, and especially the alcove seating. 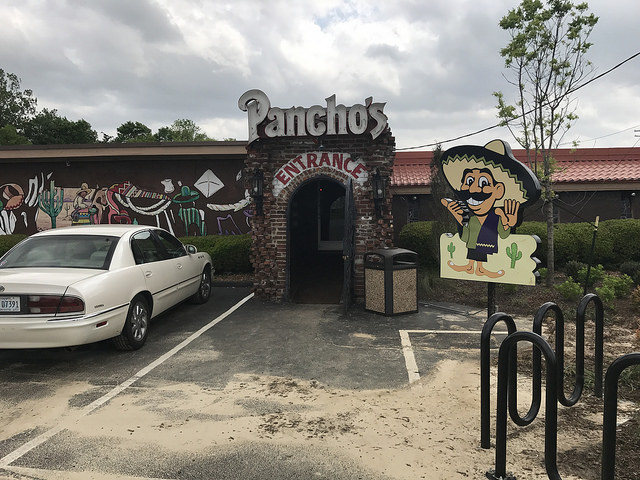 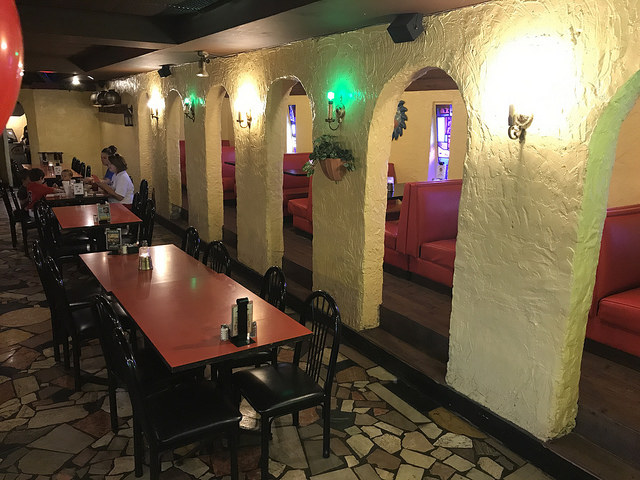 The service is quite friendly, the cheese dip is addictive, and the margaritas are strong. Pancho’s is not known for its high-quality cuisine, but the menu is extensive and you are sure to find something you like. Ashley and I went with a light snack of cheese dip, salsa, one-eyed guacamole, chips, and margaritas. That set us back $20 plus tip. 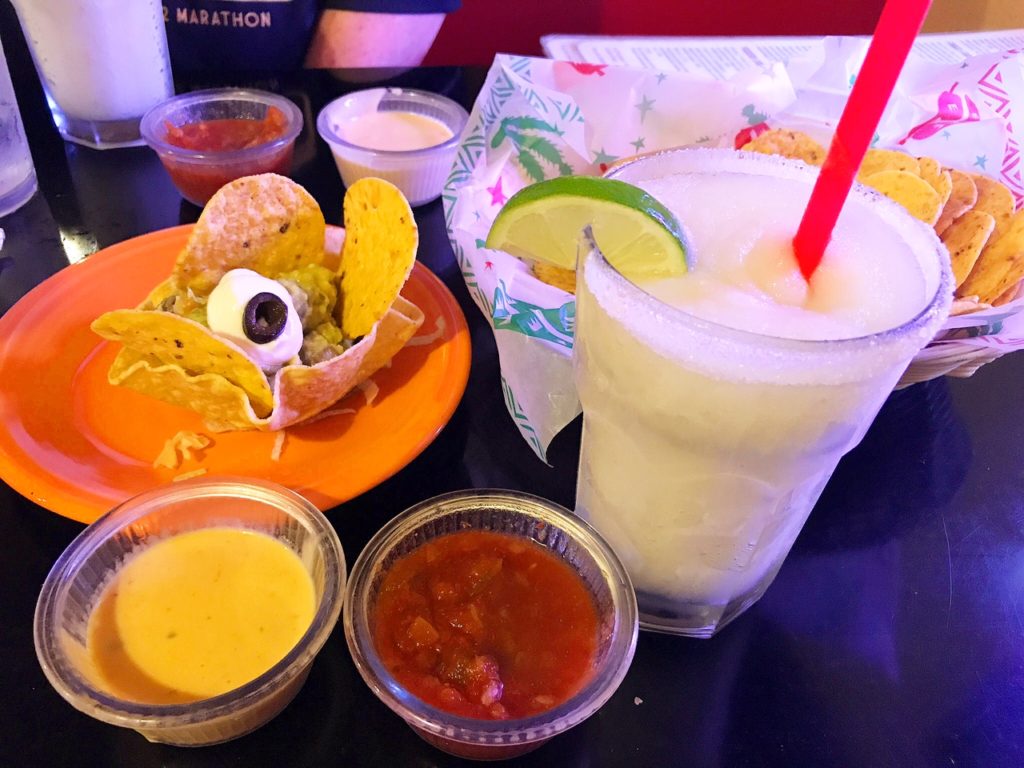 When you’ve had enough fun, just head outside and retrace your steps back to Memphis. Riding a bike to the Pancho’s in West Memphis is super fun. Riding home, not as much. There’s more of an incline, and you’ve likely got a belly full of cheese dip. Be strong.  Or get a room at the Budget Inn, and check out the West Memphis nightlife before heading back home. 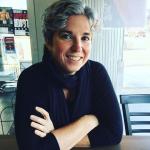 Stacey  is a freelance writer who lives in Cooper Young with her two teenaged sons. She’s a contributor to Thrillist.com, Edible Memphis, I Love Memphis, and Memphis Travel. She’s also the author of the award winning blog, Dining with Monkeys (diningwithmonkeys.com). A lifelong Memphian, she loves the fact that she’s never met a stranger here.

Stacey writes about food, the bar scene, and more.

Planning a trip in December. How the weather is good though to do this ride.

You might catch some rain, but otherwise it should be fine! Nothing too cold in Dec. usually. 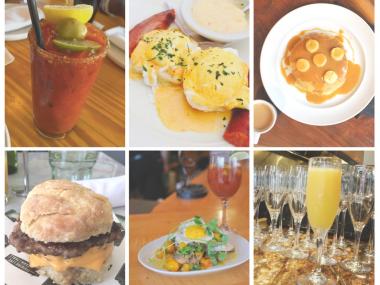 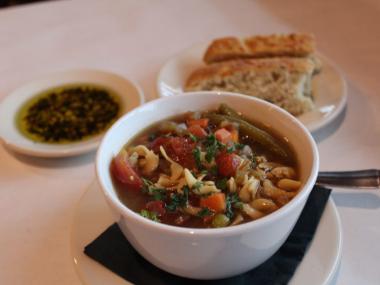 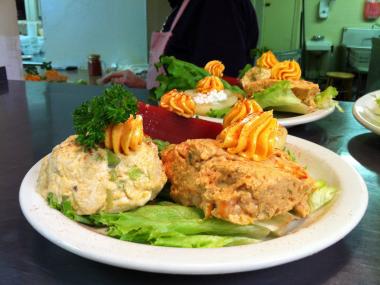 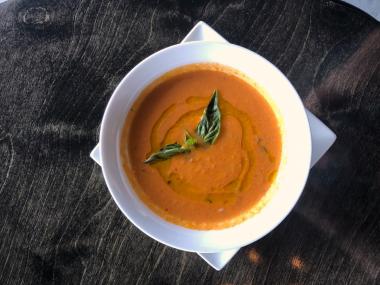