It's game six of the Breakfast Brackets, y'all. That means only two more match-ups before Round Two starts.  Woot! Here's round six - downtown's Beignet Cafe vs. Bagel Company of Memphis in east Memphis. 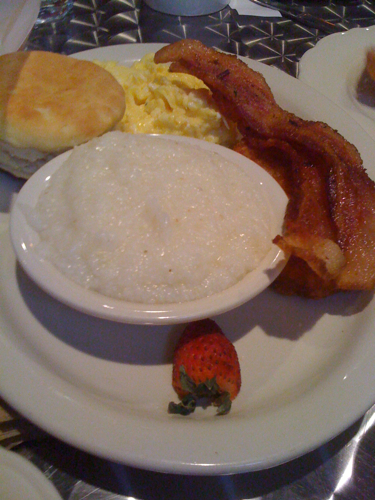 Coffee: In true New Orleans style, the coffee served at Beignet Cafe is chicory coffee. They get it locally from McCarter Coffee. I drank a lot of chicory coffee in college, so this cup totally made me smile. (7  points)

Bacon: The bacon had a decent texture and good smoky flavor, but it was totally greasy. (6 points)

Scrambled Eggs: It kind of freaks me out when I order scrambled eggs and the eggs are all the exact same color yellow. Scrambled eggs should have white parts and yellow parts - if they don't, they're over-beaten. These were definitely real eggs with white and yellow parts. My only complaint was that they were a little watery. Yolky is one thing, watery is another. (5.5 points)

Pancake: Beignet Cafe didn't have pancakes, so they'll be averaged out at 5 points. (5 points)

Grits: The grits had a good texture, a little more like oatmeal and less like couscous floating in water. They need a little seasoning, and definitely eat them before the creepy grits film forms over the top. (6 points)

Service: We seemed to be the only people in the restaurant, so the service was pretty efficient and good. That is, until we were ready to go. Our waitress disappeared and it took a long time to get our check. (7.5 points)

Atmosphere: Beignet Cafe is a little dark inside, and it's very New Orleans. When we got there, they were playing music from a genre best described as High School Marching Band Standards. After a while, they switched to replays of the Saints game. It seems like it would be a cool place to have dinner or lunch, but it can be a little overwhelming at breakfast. (7 points)

Price: The price was reasonable, about $13 total for one country breakfast (which fed both my husband and I) and two coffees. (6.5 points)

And in the other corner:

Order: Coffee, two pancakes and an egg, side of bacon, side of grits. 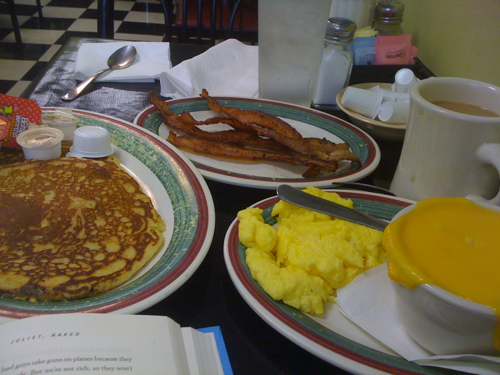 Coffee: The coffee wasn't anything special, just basic diner coffee. It was plenty hot and not watery or oily. (5.5  points)

Biscuit: Unsurprisingly, Bagel Company of Memphis didn't have any biscuits. It's a bagel shop. They'll be averaged out at 5 points.  (5 points)

Bacon: My side of bacon was completely generous. There were four big slices on the plate. It was super crispy, but not terrible. (5.5 points)

Scrambled Eggs: You know that thing I just said about scrambled eggs being all one color? These eggs were fluffy and light, but a very uniform shade of yellow. They were alright, but nothing super special.  (6 points)

Pancake: Bagel Company of Memphis' pancakes were about 7" wide. They were a little on the dry side, but they were warm and uneven like they had just been cooked. (6.5 points)

Grits: The grits at Bagel Company of Memphis were cheese grits. What that meant was that there was a cup of grits with some cheese poured on top. By the look and taste of the cheese, it was just step up from the stuff that gets squirted on chips at the fair. It does add some flavor, though. The texture of the grits was nice - they were thick and not too watery.  (5 points)

Service: Bagel Company of Memphis has table service, but you get up to pay at the counter. My waitress was very efficient, but a little cold. The lady at the counter was super friendly and nice when she rang up my check. (7 points)

Atmosphere: The restaurant was fairly crowded. There were a lot of families and retired people eating bagels and chatting. It's the sort of place where people seem to sit and stay a while. (7 points)

Price: My breakfast was $11, which seemed a little high. It's because the bacon and the grits are listed and priced as side items instead of included as part of a meal. This is the only place I've been so far that didn't have some kind of standard breakfast meal that included at least four of the five food items I'm out to try. (5 points)

Ladies and Gentlemen, the Beignet Cafe trounced the decidedly average Bagel Company of Memphis. Beignet Cafe will continue on to round two, where it will face off against Brother Juniper's.

How are the beignets?

They're pretty tasty. We ordered them as a side dish, and they were hot and covered in powdered sugar. Yum!

Good info. I have been wanting to try the Beignet Cafe

I really enjoy reading your reviews of various bfasts from around the city. I am not surprised Bagel Company lost. However, in their defense, I will say if you want awesome bagels for breakfast, this is definitely a place to go! I am not sure they are known for eggs, bacon, etc.... :-)